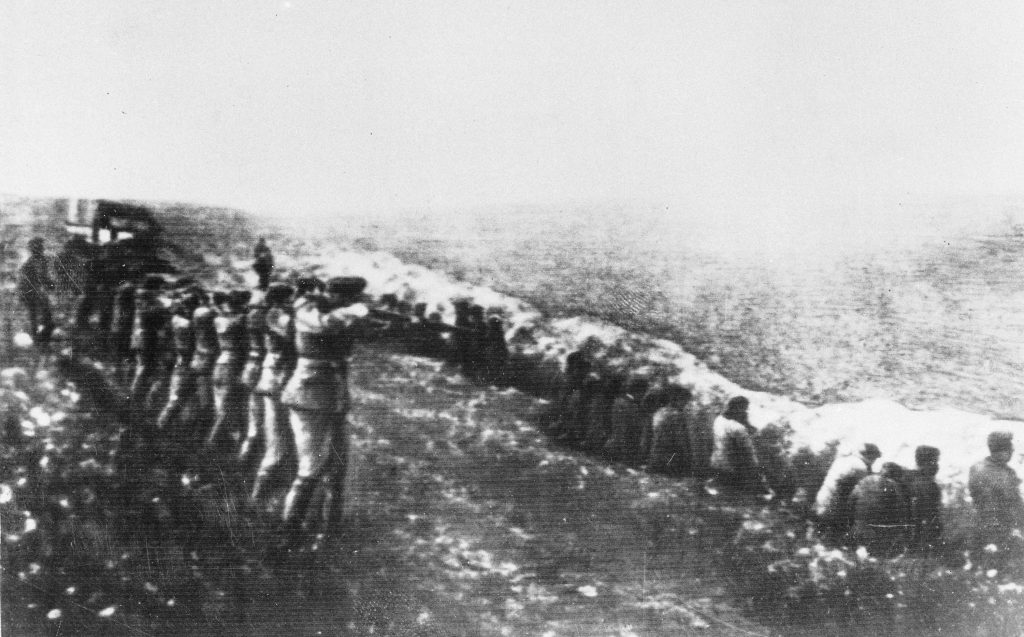 German prosecutors are investigating a suspected former member of Adolf Hitler’s mobile killing squads for involvement in World War II massacres carried out by the “Einsatzgruppen,” part of an 11th-hour effort to bring elderly ex-Nazis to justice, The Associated Press has learned.

It’s the third case to be opened in Germany recent months targeting individuals who are believed to have been part of the death squads. All three are being investigated under a new legal argument, recently upheld by the country’s top criminal court — that someone who helped the Nazi killing machinery run can be convicted of accessory to mass murder, even if they can’t be linked to specific deaths.

Extending the legal standard on complicity from death camp guards to the Einsatzgruppen raises the possibility of a fresh wave of investigations, said Efraim Zuroff, the head Nazi hunter at the Simon Wiesenthal Center in Jerusalem, who alerted German authorities about the new suspects.

“It was a very significant decision; but it’s only one that has been reaching fruition in recent months, after we helped them find now three people who fit the category,” he said. “It’s not exactly clear why it took them so long.”

The Einsatzgruppen were the Nazis’ opening salvo in the Holocaust — SS units and police personnel who followed behind the regular army as it pushed into the Soviet Union in 1941, slaughtering perceived racial or political enemies in mass executions. Estimates vary; but experts agree they were responsible for well over 1 million killings, mostly Jews.

The Nazis later established their system of death camps, partially due to concerns about the psychological effects the up-close mass killings were having on the Einsatzgruppen troops themselves.

“The death camps and concentration camps … became the iconic images of the Holocaust, but it was the Einsatzgruppen that were maybe even a more stark manifestation of the Nazi ideology and the Final Solution,” Zuroff said. “The number of active (Einsatzgruppen) participants is much greater than the number who actually carried out the murders in the death camps.”

The latest investigation centers on 95-year-old Wilhelm Karl Friedrich Hoffmeister, a former SS Rottenfuehrer — roughly equivalent to corporal — suspected of serving with one of the death squads in Ukraine.

That group, Einsatzgruppe C, was responsible for the shootings of nearly 34,000 Jews at Babi Yar, a ravine northwest of the Ukrainian city of Kiev, on Sept. 29-30, 1941 — one of the largest and most notorious of the mass executions done by Einsatzgruppen.

The German federal prosecutors’ office in Ludwigsburg that investigates Nazi war crimes has established that Hoffmeister was in Ukraine with the unit around that time, but hasn’t linked him to any specific killings, Jens Rommel, the head of the office, told the AP.

“We don’t know what he did on what day,” Rommel said.

Rommel’s office does not have authority to file criminal charges, but determined that there was enough evidence to recommend that prosecutors based near where Hoffmeister lives in a retirement home pursue accessory to murder charges against him.

Serving in the unit would not be enough on its own to secure a conviction, even under the updated evidentiary standard, so the prosecutors in Braunschweig need proof that Hoffmeister was present in some capacity when Einsatzgruppe C committed atrocities.

The argument that Germans who enabled war crimes could be charged with accessory to murder even if they did not personally pull a rifle trigger or put the poison in the gas chamber was first used successfully against former Ohio autoworker John Demjanjuk in 2011.

Demjanjuk was convicted in Munich on allegations that he served as a Sobibor death camp guard, which he denied. He died before his appeal could be heard.

The 2015 conviction of former Auschwitz guard Oskar Groening using the same argument, however, was upheld the next year by Germany’s top criminal court on appeal, cementing the precedent.

Several Einsatzgruppen leaders were tried and convicted in Nuremberg immediately after World War II. In recent years, prosecutors have focused more on former guards at Auschwitz and other death camps, dedicating their limited resources to cases comparatively easier to prove.

“With the Einsatzgruppen, they were mobile, on the move over a huge area, so it’s much more difficult,” Rommel said. “We hope with the new legal situation we will have better success.”

Hoffmeister has told police he served in a successor group to the Einsatzgruppe C — “Special Task Force C” — and did not participate in any killings, lead prosecutor Julia Meyer told the AP.

“He says categorically, he was not involved in any shootings,” she said, adding that Hoffmeister also maintained he does not remember a lot about the war years.

Rommel’s office began looking at Hoffmeister and other Einsatzgruppen members after the Wiesenthal Center in 2014 went through a list of 1,069 men and women who had served with the units, pulling out the names of 80 people who were born after 1919, and thus, most likely to still be alive.

Rommel’s office zeroed in on eight suspects they determined were alive, and have now turned over the files on Gosdek, Wahler and Hoffmeister to state prosecutors to pursue charges. One of the eight has since died and four others — all from Einsatzgruppe A, on which there is less information — are still under investigation, Rommel said.

Though the Wiesenthal Center only has names and dates of birth for 1,069 people who served in the Einsatzgruppen, some estimates suggest the number could be as much as eight times higher, meaning dozens more might be alive.

Scaramucci made the donation in October after coming under criticism for a poll on how many Jews were killed in the Holocaust tweeted by his post-White House media venture, the Scaramucci Post, which many considered inappropriate and offensive. The center’s headquarters in Los Angeles has said the money will go to Zuroff and can be used to hire researchers.

“Now the challenge is to find the rest of the names,” Zuroff said. “We owe it to the victims.”