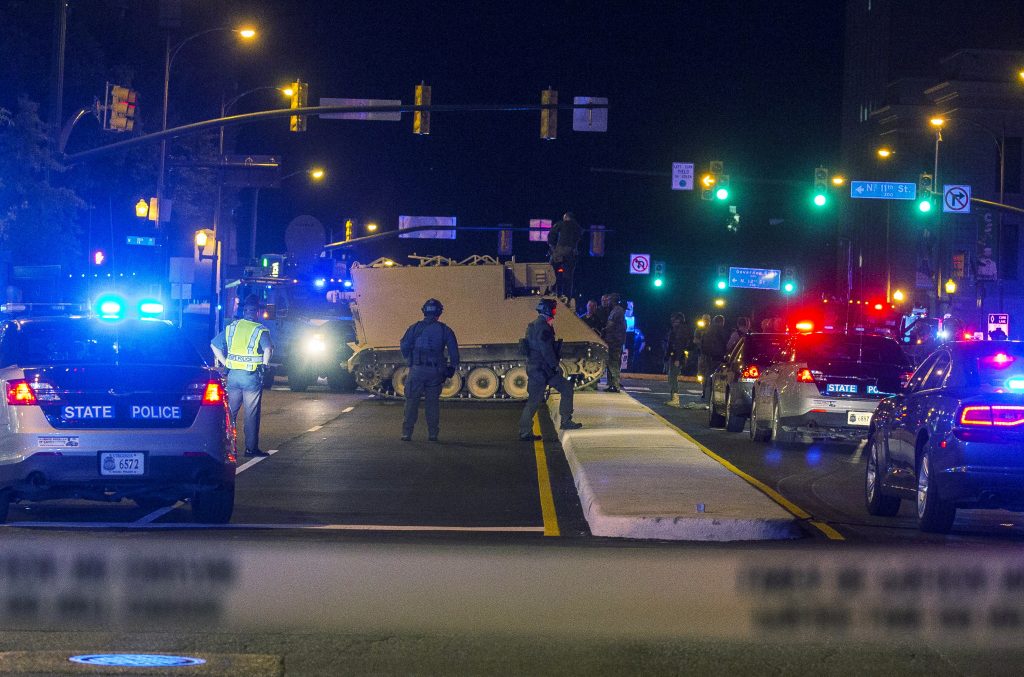 An Army National Guard officer accused of stealing an armored personnel carrier from a Virginia base and leading police on a more than 60-mile chase was driving under the influence of illegal substances, police said Wednesday.

Joshua Philip Yabut, 29, of Richmond, was charged with eluding police and unauthorized use of a vehicle, the Virginia National Guard said in a news release.

The vehicle, which drives on tracks like a tank, was stolen Tuesday evening from Fort Pickett in Blackstone. Police chased it for about two hours at speeds as high as 40 mph (65 kph) before the driver stopped and surrendered near Richmond City Hall, Virginia State Police said.

The Guard said the personnel carrier was driven away during routine training at Fort Pickett and has been returned to the base. The vehicle wasn’t equipped with any weapons, but Yabut had his personal weapon with him without any ammunition, the Guard said.

Police said an investigation is ongoing and declined to comment on a motive for stealing the vehicle, but said he was under the influence of illegal substances.

Yabut is being held at the Richmond jail. No bond was set when he appeared Wednesday in Richmond General District Court via video link from the jail. Yabut’s attorney, Assistant Public Defender Thomas Wieworka, did not immediately return a call seeking comment.

The Guard said Yabut is a first lieutenant assigned as company commander of the 276th Engineer Battalion and has more than 11 years of service. He deployed to Afghanistan from 2008 to 2009 with the Illinois National Guard.

“We are extremely grateful that there were no injuries as a result of this incident, and we appreciate the great work of the Virginia State Police, Richmond Police Department and other law enforcement and first responders who safely brought this situation to a close,” Maj. Gen. Timothy P. Williams, the adjutant general of Virginia, said in a statement.

Williams said the Guard has started an internal investigation and “will determine appropriate actions once the investigation is complete.”

Michael Finneran, a spokesman for the NASA Langley Research Center in Hampton, said Yabut worked there in a civilian job in the office of the chief information officer from 2014 to 2017.

Yabut seemed to foreshadow the theft and chase in Twitter posts Tuesday. Hours before the vehicle drove off the base, an account confirmed by the Guard as Yabut’s tweeted a Wikipedia entry about the M113 armored personnel carrier, which is similar to the M577 vehicle police chased, and a screenshot of a map around the area where the vehicle eventually stopped.

Minutes after police began their pursuit shortly before 8 p.m., Yabut posted a photo and video of himself in what appears to be the stolen vehicle.

He wrote a series of odd tweets Tuesday, including, “wow I think I just discovered a large illegal spy operation in the us government.”

Attempts to reach Yabut’s family members were not successful.

In February, Yabut filed papers to run as an independent candidate for the U.S. Senate seat currently held by Tim Kaine.

Yabut is due back in court on July 11.