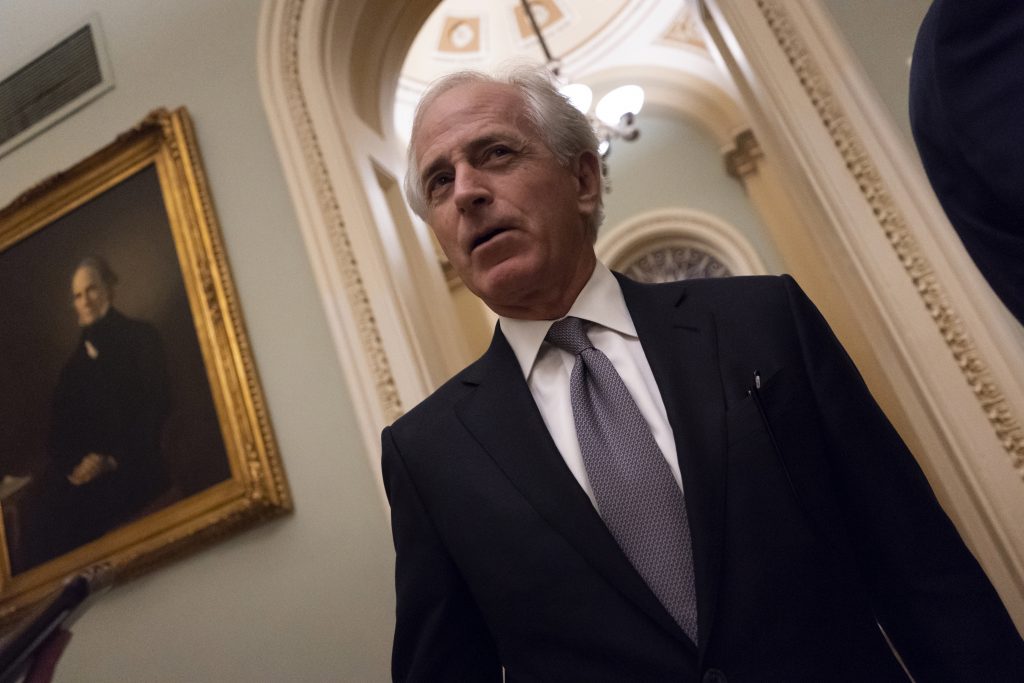 A bipartisan group of 10 senators introduced longshot legislation Wednesday that would require Congress to sign off on tariffs imposed in the name of national security, defying President Donald Trump on a bedrock issue that once defined the GOP.

Congressional Republicans are mostly at odds with what they view as Trump’s protectionist instincts on trade. Despite much hand-wringing, prospects for any bill to challenge him remain uncertain. Many Republicans are hesitant to confront Trump in a legislative showdown that could end badly for them. Doing so could court a veto and bruise their standing with Trump voters they need in midterm elections.

Senate Majority Leader Mitch McConnell (R-Ky.) indicated he was not interested in spending too much time on the effort presented behind closed doors Tuesday by its chief proponent, Sen. Bob Corker (R-Tenn.), saying he preferred to focus on “getting bills passed.” And the second-ranking Republican, Sen. John Cornyn of Texas, said he hoped Republicans concerned about the tariffs could prevail on the president to reverse course. He was heading to the White House later Tuesday for talks.

“Not everything we do has to be legislative. Part of this job is persuasion,” said Cornyn. He said lawmakers would “continue to make the case” with the president and his staff, which he noted is divided.

Trump took office promising to rip up trade deals and crack down on unfair trading practices. But that campaign slogan is at odds with Republicans’ longstanding preference for free markets and open trade. The standoff is raising an uncomfortable question: If Republicans can’t confront Trump on trade, can they challenge him on anything?

“For Republicans, this is who we are,” said Sen. Jeff Flake (R-Ariz.). “If we believe our own rhetoric — on trade, tariffs and congressional prerogative — I hope it does come to a vote.”

The idea being pursued by Corker, Sen. Pat Toomey (R-Pa.) and others who have been meeting privately — and with Democrats — would be narrowly crafted legislation requiring congressional approval of the tariffs Trump has imposed in the name of national security.

They’re targeting Trump’s reliance on the so-called 232 authority, named from Section 232 of the Trade Expansion Act of 1962, which allowed the administration to impose tariffs of 25 percent on imported steel and 10 percent on imported aluminum from Mexico, Canada and the European Union, some of the U.S.’s top allies. The senators are also hoping to halt Trump’s threat to slap tariffs on auto imports, including those from Japan.

“I fail to see the national security threat when a Pennsylvanian decides to buy a Toyota Corolla,” Toomey said.

It’s not just Mr. Trump, the senators say, but past administrations that have leaned too heavily into the national security provision the lawmakers now want to subject to congressional oversight.

“When you can just name anything as a national security issue then basically you undermine the whole trade agreement process,” Corker said Tuesday.

Five Republicans and four Democrats signed on as co-sponsors to Corker’s bill. The bill requires the president to submit to Congress any proposal to adjust imports in the name of national security and provides for speedy consideration. The requirement would apply to all such actions moving forward as well as those taken in the past two years.

The U.S. Chamber of Commerce quickly endorsed it, saying “this modest proposal to clarify congressional prerogatives is welcome and long overdue.”

Corker acknowledged the difficulty in passing legislation despite “tremendous concern” among lawmakers in both parties. “My guess is the administration may have some resistance,” he said.

Time and again, Republicans in Congress have been reluctant to put guardrails around Trump as the administration has veered from GOP orthodoxy in policy or as the president interprets the law, as he did earlier this week, to assert the special counsel probe is unconstitutional and that he has the power to pardon himself.

Flake is one of the few Republicans who repeatedly take on Trump, and he has separately offered a bill that would reverse the steel and aluminum tariffs, with support from Democratic Sen. Heidi Heitkamp of North Dakota.

Farm-state senators are particularly concerned about retaliatory tariffs that would close off foreign markets to key crops like soybeans and corn. “It isn’t as if the dog has not barked,” said Sen. Pat Roberts (R-Kan.), the chairman of the Senate Agriculture Committee.

Roberts hesitated though on whether he could back the bill. “I’ve got to get a farm bill done. I don’t want to roil the waters.”

Challenging Trump comes with its own risks, from alienating his supporters to taking voters’ attention off a healthy economy before the midterm elections, which will determine control of the House and Senate.

Rep. Tom Cole (R-Okla.) said it’s too early to say whether the House would take up Corker’s proposal. Lawmakers are wary of a trade war, he said, but “we’re not looking for a fight with the president.”

“A lot of senators are a lot braver since they’re not on the ballot. Over here, everybody is on the ballot,” Cole said.

Asked if Congress will act on trade, Sen. Roy Blunt (R-Mo.), a member of GOP leadership, answered simply: “No.”