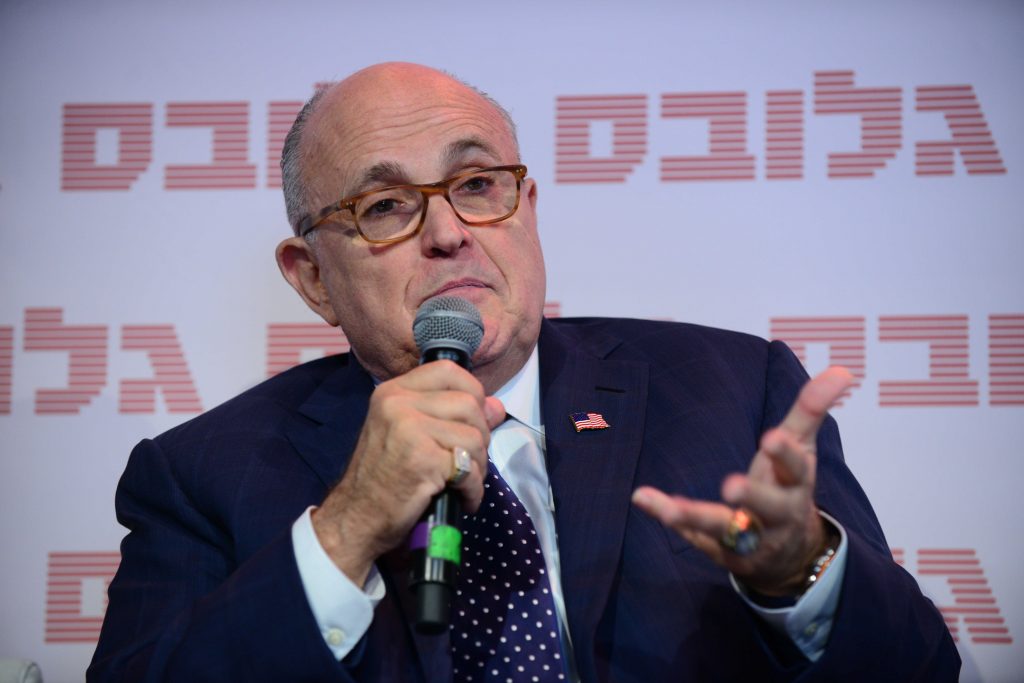 Rudy Giuliani, in typical all-or-nothing style, praised Israeli Prime Minister Binyamin Netanyahu and laid down the law to the Palestinians in a broad-ranging interview with Globes on Wednesday.

The former mayor of New York and currently a lawyer for President Donald Trump, started off with a blanket dismissal of one of the pending charges against Netanyahu.

“The case against Netanyahu is a joke. There’s not a politician in the world that doesn’t do deals with newspapers to get favorable coverage,” Giuliani said.

On the contrary, instead of prosecuting him, Israelis should appreciate him. “You’re very lucky to have a distinguished prime minister who enjoys relations like these with the U.S. president.”

When asked if Israel would eventually have to make concessions to reach a peace agreement with the Palestinians, Giuliani answered that it “doesn’t mean complying with every irrational request they make. The chaos in the Palestinian Authority has got to end; and the Palestinian Authority has got to become peaceful. Most Israelis aren’t stupid. They see that the PA is unfit to take responsibility and is educating its children to murder. They’re making very dangerous choices.”

“The entire dynamics have to change; and the Palestinians have to be willing to do things they haven’t done in the past. They have to do three things: recognize Israel, promote peace and come out against terrorism.

“As of now, they haven’t done these things. Our previous presidents, Obama and Clinton, ignored this; and the situation only got worse. The most important thing is a realistic approach; and this is what Trump has been doing until now.”

Netanyahu’s critics accuse him of merely paying lip service to the peace process, but that he has no real intention of reaching an agreement with the Palestinians.

Giuliani rejected that idea: “You can’t make peace by yourself. People who try to do that end up in a war. This might be the lesson of WWII. The Cold War was a result of Truman’s mistake in negotiations with the Soviet Union. I think Netanyahu is a realistic person and his connection with Trump is great — two people who look at the world realistically, setting goals, but unwilling to sacrifice their peoples to achieve these goals.”

Regarding the moving of the U.S. embassy to Yerushalayim, Giuliani said: “Nations are entitled to choose their capitals; and Israel chose Jerusalem. That has to be respected. I don’t think that the U.S. would be happy if the rest of the world decided that Cincinnati, Boston, or Los Angeles was the capital of the U.S. We chose Washington as the capital. If you respect someone, you recognize his capital. It’s a sign of disrespect if you don’t do it. The only reason why people don’t recognize Jerusalem is that they are giving in to fear of terrorism from the Palestinian Authority.”