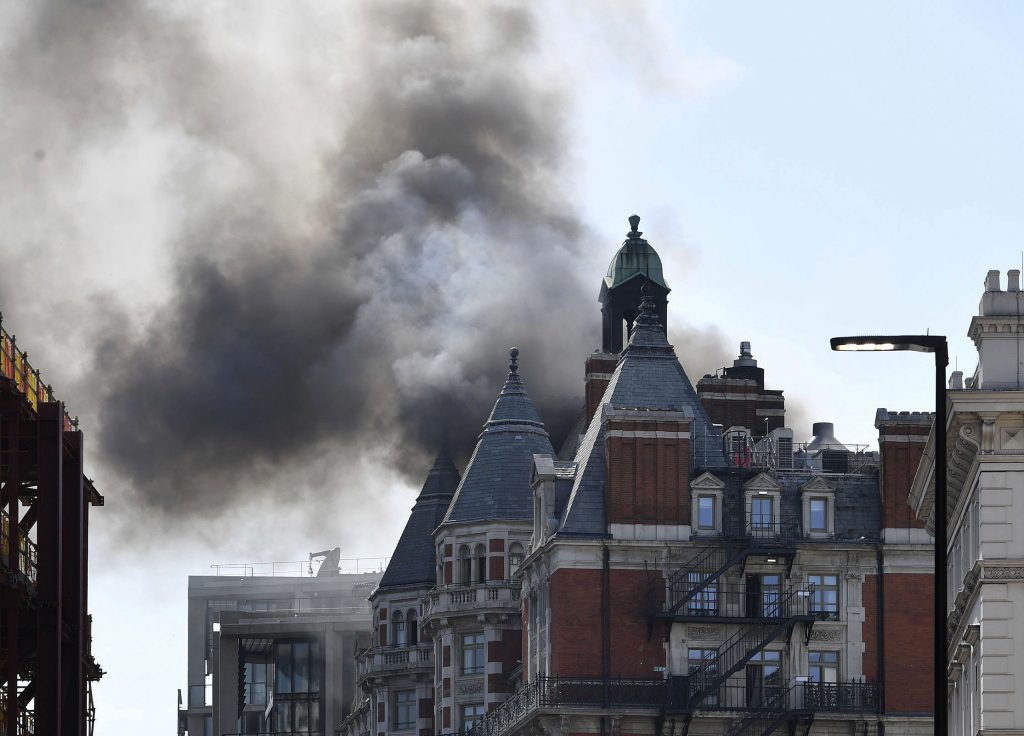 More than 100 firefighters tackled a blaze at a luxury hotel in central London that produced thick black smoke visible for miles around, and required people inside the building to evacuate Wednesday.

London Fire Brigade said it was called to the 12-story Mandarin Oriental Hotel just before 4 p.m. Less than an hour later, 20 engines and 120 firefighters were at the scene, and much less smoke was billowing from the top of the hotel.

There were no immediate reports of injuries. Firefighters wearing breathing apparatus were searching the structure to see if anyone was still inside, the fire brigade said.

The cause of the fire was not yet known. One witness said laborers had been working earlier on the roof of the 116-year-old hotel, which recently underwent extensive renovations.

Writer Juno Dawson tweeted: “Well that was drama. The Mandarin Oriental is literally on fire. Evacuated mid photoshoot. Hope everyone is ok. It was the construction site on the roof that seemed to be on fire.”

Hotel employees evacuated to nearby Hyde Park and were given bottles of water as they waited for instructions.

Firefighters were “working extremely hard to bring the fire under control,” and likely to be on the scene for several hours, Fire Brigade Station Manager Pam Oparaocha said.

The road in front of the hotel in London’s ritzy Knightsbridge neighborhood was closed, causing rush-hour traffic chaos in the area.

Parts of the busy Knightsbridge Underground station also were closed as a precaution.

Mandarin Oriental said that “as the situation is still unfolding, we have no further details to share at this time, but will provide an update soon.”

The ornate Edwardian building near Hyde Park opened as a hotel in 1902. It has 181 bedrooms and suites, and is located near Harrods, an iconic department store that itself was destroyed by fire in 1883 and rebuilt.