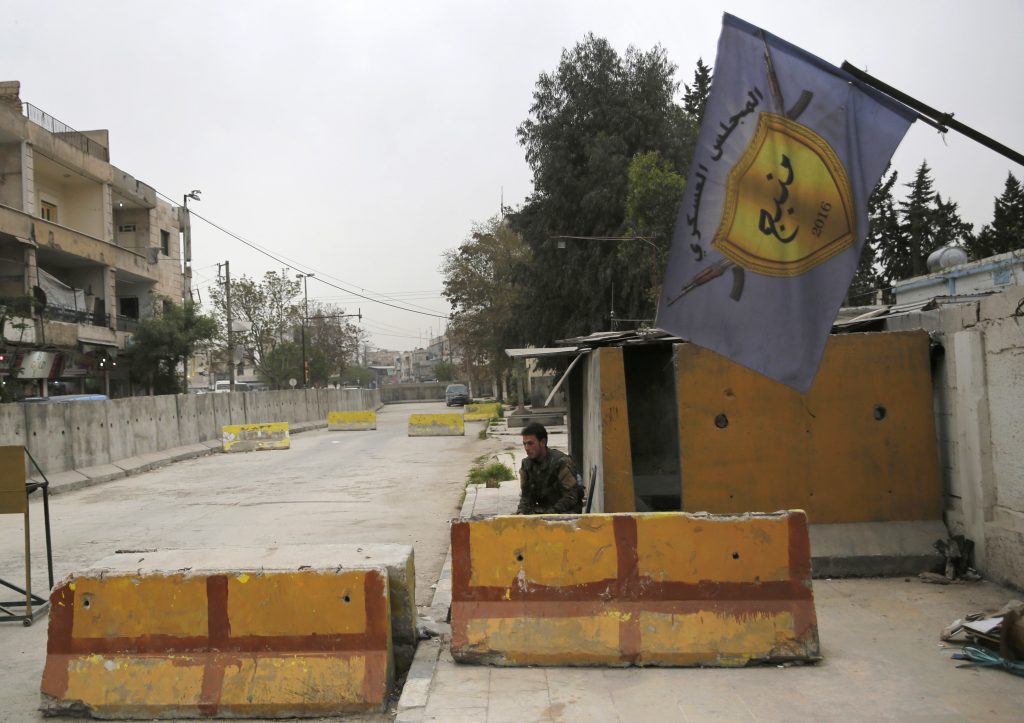 A Syrian Kurdish militia announced Tuesday it was pulling out of a key northern Syrian town, a move that could ease a serious rift between NATO allies United States and Turkey.

The two countries have been at odds over the future of north Syria since the U.S. began supporting a Kurdish militia known as the YPG to fight back against the rapidly expanding Islamic State group in 2014. Turkey considers the YPG a terror group tied to a Kurdish insurgency within its own borders.

The YPG’s announcement that it would pull its military advisers out of Manbij, a small but strategic town in central-north Syria, paved the way for a rebalancing of forces along the Syrian-Turkish frontier. The retreat could allow Turkey to control most of its border west of the Euphrates River, a longstanding demand it has tied to its national security.

The YPG — Kurdish initials for “People’s Protection Units” — said in a statement that its advisers had completed their mission to train the local forces, the Manbij Military Council, to defend the multi-ethnic town.

Turkish Foreign Minister Mevlut Cavusoglu said Tuesday the Kurdish fighters leaving Manbij would have to give up their weapons as part of a deal reached with the United States. There was no immediate comment from the YPG on whether they would agree.

Turkey has been pushing the U.S. to cast the YPG out of Manbij since the militia helped capture the town from the Islamic State group in 2016. After Turkey seized another town, Afrin, from the YPG, President Recep Tayyip Erdogan threatened to expand operations to Manbij, but U.S. troops stationed in Manbij have served as a deterrent.

Since 2016 Turkish and Turkish-backed Syrian forces and U.S.-backed Kurdish and other Syrian forces have been exchanging gunfire at a tense front around Manbij.

Meanwhile tensions erupted elsewhere, including when Turkey bombed positions held by U.S.-backed fighters in other parts of the autonomous Kurdish area in 2017.

The YPG retreat will ease the standoff between the YPG and Turkish-backed Syrian fighters, which has become a major sore point between NATO allies and a distraction for the U.S.-led coalition seeking to defeat IS in Syria.

On Monday the U.S. and Turkey issued a joint statement saying they had “endorsed a road map” that aims to “ensure the security and stability of Manbij,” in a sign that the Trump and Erdogan administrations were seeking common ground over their visions for north Syria.

Speaking to reporters on Tuesday, Cavusoglu also said that Turkish and U.S. officials would begin working on a plan for Manbij within the next 10 days and the Syrian Kurdish militia’s withdrawal would be complete within six months.

A Turkish official said the withdrawal will be according to a U.S. plan, to be completed next week, and then Turkey will review the withdrawal before a new council to administer the town is set up. The official spoke on condition of anonymity because he was not authorized to talk to reporters.

The State Department did not confirm Cavusoglu’s remarks.

The U.S. is estimated to keep 2,000 forces stationed in north Syria, and it operates airstrips and outposts in the Kurdish-administered territory that stretches across Syria’s north and east of the Euphrates River. Manbij lies west of the river.

It was not immediately clear what will happen to the U.S.-supported Manbij Military Council that currently administers the town.

Shervan Darwish, a member of the council, said residents were “anxious” about the news. He estimated one million people live in Manbij and the surrounding countryside, many of them displaced from fighting elsewhere in the country.

What seems certain is that Manbij will remain beyond the reach of Syrian President Bashar Assad’s government in Damascus, which has been forced to surrender much of its authority in northern Syria to Turkey and the U.S.-backed Syrian Kurdish militia as it fights rebels elsewhere.