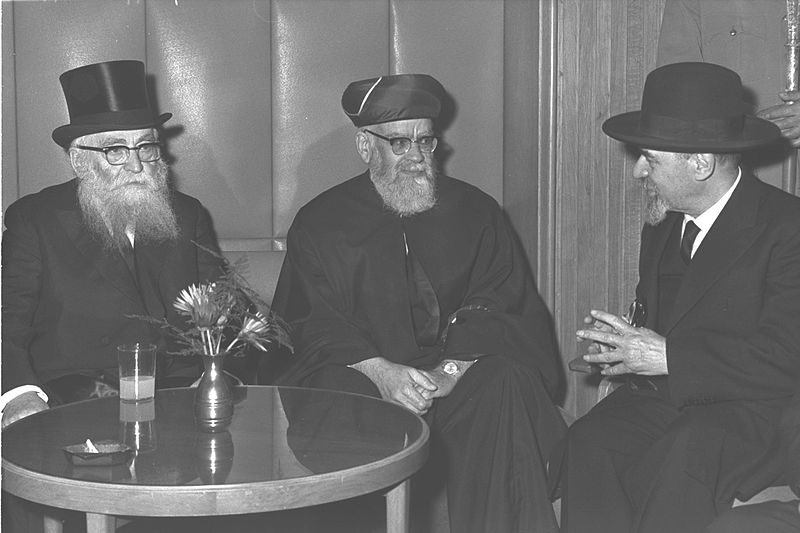 It was established 97 years ago to serve as an anchor for Jewish tradition and to preserve its values. The Chief Rabbinate was and still is the basis and source of all religious foundations in the State of Israel: marriage, divorce and conversion.

One of its Rabbanim for 18 years was the Rishon LeTzion Harav Yitzchak Nissim, zt”l. Among his well-known actions was his intervention regarding the law of “Mihu Yehudi, Who Is a Jew?” Rav Nissim worked to ensure that the definition of Jewish peoplehood would be determined according to halachah and not on the basis of a person’s declaration that he is a Jew.

He stood firm on the matter of Jewish pride and refrained from meeting Pope Paul VI when the latter visited Israel in 1964. It was a historic event, at which the Rav was expected to take part in the state ceremony. However, he refused unless the pope would then pay a return visit to the Chief Rabbi.

While his father served as Chief Rabbi, Moshe Nissim was elected to serve as a member of Knesset at the young age of 24. Moshe entered the Knesset under the general Zionist parties, and then continued to serve as an MK in the United Liberal party, and later, Gachal and the Likud. He soon was appointed Justice Minister and remained in that position until retirement, when he returned to the practice of law.

This past year, he was asked to head a committee that formulated recommendations on the matter of conversions in Israel.

It was clear that the recommendations of a committee that was political would be political, and when politics meets halachah and Jewish tradition, they don’t usually go hand in hand. Unlike in politics, it is impossible to live with compromises or rounded corners when it comes to Judaism or conversion according to halachah.

But it seems that the most outrageous recommendation is the one that tries to remove the whole issue of conversion from the domain of the Chief Rabbinate, and establish instead a separate entity to handle conversions in Israel. The conclusion of the committee, in other words, is that the Chief Rabbinate is too Jewish and the reins should be handed over to avowed secularists.

A wise Jew once said: “How do I know if I did the right thing? I look around me and see who are my friends and who are my enemies.” It was enough to see this week the joy of the liberal movements upon learning of the recommendations to realize that they are a danger to Judaism. For example, the executive director of the traditional movement, Dr. Yizhar Hess, said that “removing the domain of conversion from the Chief Rabbinate in favor of a separate, independent conversion entity is a blessed thing.”

It was pleasing to see that specifically the Tzohar organization, which usually criticizes the Chief Rabbinate and is trying to implement a more progressive, friendlier Rabbinate, also came out firmly in opposition to the recommendations of the former justice minister: “Politicians must not determine what is conversion and what is halachah.”

One of the claims aired against the Chief Rabbinate is that it is old and stale. If you please, this has an advantage: It is in charge of preserving Jewish values in the ancient Jewish spirit.

The Chief Rabbinate is subjugated to the Four Sections of Shulchan Aruch. Anyone who tries to violate one of those parts harms the very existence of Judaism. If they alter conversion, then they are further undermining the core values of Judaism.

It should be stated clearly: Chareidi Jewry will not remain silent in the face of these periodic, foolish efforts to violate the fabric of Jewish tradition; to take halachic authority and place it into foreign, hostile hands. This act of thwarting the Chief Rabbinate and criticizing the institution where his father served for so many years is much like a son rising up against his father. The father worked to define who is a Jew and to preserve the Jewish nation, and the son is breaching those boundaries.

The one who has risen up to defend Mr. Nissim’s father is the Rishon LeTzion Harav Yitzchak Yosef, shlita, who issued a call to all the Rabbanim in Israel, from all factions, “to unite and to voice their opposition against the committee’s report on the subject of conversion,” stating that the recognition of conversions that are not in accordance with halachah “is a very serious breach.”