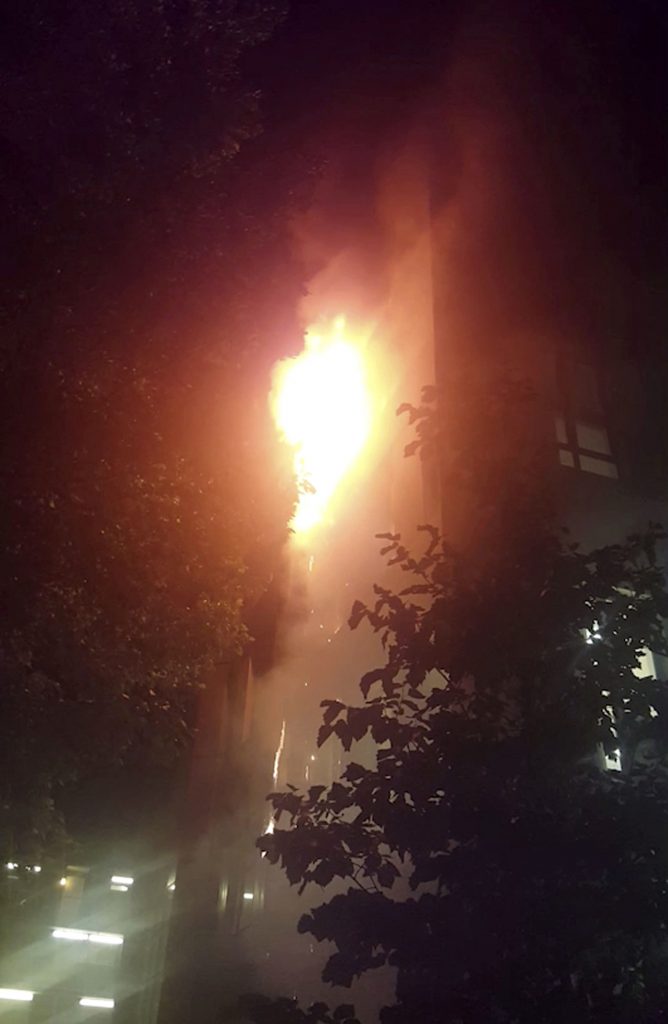 Residents of London’s Grenfell Tower high-rise were wrongly told to stay in their apartments as fire raged through the building, aided by flammable external cladding and a host of fire-safety failings, an expert report said Monday.

Fire-safety engineer Barbara Lane said the fire department’s “stay put” policy had “effectively failed” barely a half-hour after the fire started early on June 14, 2017. But, she said, residents weren’t told to evacuate for more than an hour after that, at 2:47 a.m.

Lawyer Richard Millett, chief counsel to an inquiry investigating the fire, said “it may be that the formal maintenance of that advice until 2:47 a.m. made all the difference between life and death.”

Lane’s report was published by the inquiry probing causes of the fire, which started in the kitchen of a fourth-floor apartment, likely in a faulty refrigerator, and raced within minutes up the 25-story public housing block.

Lane, a director of engineering firm Arup, said that a renovation completed in 2016 installed flammable aluminum-and polyethylene cladding on the tower’s facade and led to “multiple catastrophic fire-spread routes.”

Lane said there had been “a culture of non-compliance” with safety regulations, and identified multiple failures. Elevators failed, a smoke ventilation system did not work properly and doors did not shut or were left open, allowing smoke to spread.

“The building envelope itself was therefore a major hazard on the night of the fire,” Lane concluded. She said the consequences “were catastrophic.”

The judge-led inquiry, which began hearing evidence Monday, and is expected to last about 18 months, aims to find the causes of Britain’s deadliest fire in decades and to prevent future tragedies.

It will examine how the blaze spread so quickly, the response of emergency services and local authorities, and the country’s high-rise building regulations.

“The fundamental question which lies at the heart of our work is how, in London, in 2017, a domestic fire developed so quickly and so catastrophically that an entire high-rise block was engulfed,” Millett said. “And how it was that 71 people lost their lives in a matter of hours, leaving families and friends in shock, grief and bewilderment.”

A 72nd victim injured in the blaze died in January.

Millett said that survivors and bereaved relatives had been left with “an abiding sense of injustice, betrayal and marginalization, leading to an overwhelming question: Why?”

The inquiry is one of the biggest ever held in Britain, involving dozens of lawyers representing more than 500 “core participants,” including residents of the tower. It will hear from scores of witnesses, including police, firefighters, experts and survivors.

Monday’s hearing followed almost two weeks of personal tributes from friends and family aiming to ensure that the victims — who ranged from an 84-year-old woman to a stillborn premature baby — aren’t forgotten during months of detailed evidence on building regulations, fire-safety procedures and government policies.

During the emotional tribute sessions, Hassan Hassan told of the loss of his 31-year-old wife Rania and daughters Fethia, 4, and Hania, 3. Like many others who died, they followed fire department advice to stay in their apartments and await rescue.

“My message for the judge — please, please, please work from inside your heart to give justice to other families living like this, to be safe,” he said. “We need to make sure this doesn’t happen again in London, in all of U.K.”

Some residents accuse officials in Kensington and Chelsea, one of London’s richest boroughs, of ignoring their safety concerns because the publicly owned tower was home to a largely immigrant and working-class population. They are critical that the inquiry won’t investigate wider issues around social housing.

Grenfell United, a group representing survivors and bereaved families, said the inquiry was “the beginning of a long road to justice.”

The group, which accuses local authorities and the government of failing to heed residents’ safety warnings, said “the scale of the tragedy has devastated our lives and our community. What makes it even worse for us is the knowledge that these deaths were completely avoidable.”

Police say they are considering individual or corporate manslaughter charges in the blaze, but no one has yet been charged.