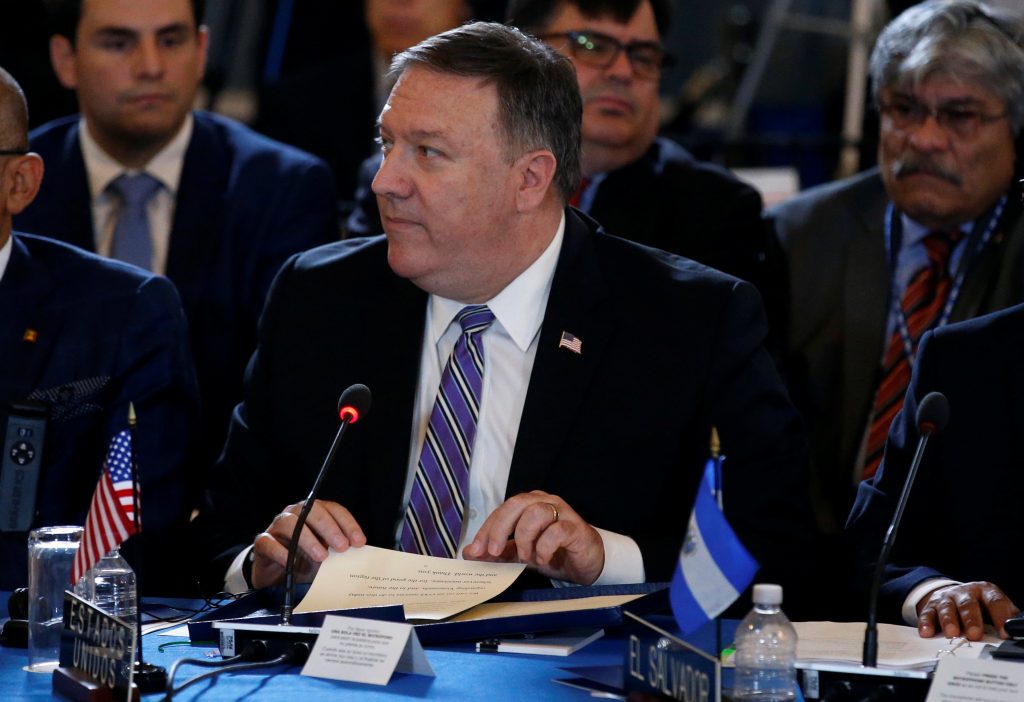 Secretary of State Mike Pompeo on Monday called for Venezuela to be suspended from the Organization of American States for crushing democracy and causing a humanitarian crisis that has driven millions of people from the country.

Pompeo’s remarks at the opening of the OAS general assembly reflected a renewed push to increase the economic and diplomatic cost of what Pompeo called the “dismantling of democracy” under President Nicolás Maduro. Vice President Mike Pence is expected to call for Venezuela’s suspension at a White House reception for OAS members Monday night, in advance of a vote on Tuesday.

“That suspension is not a goal unto itself,” Pompeo said. “But it would show the OAS backs up its words with action, and would send a powerful signal to the Maduro regime – only real elections will allow your government to be included in the family of nations.”

Pompeo’s call for Venezuela’s suspension from the premier political institution representing the Western Hemisphere is shaping up to be a rush to expel it before it withdraws on its own. A year ago, Venezuela said it would withdraw from the organization because of its attacks on the country’s sovereignty, but the process won’t take effect until next April.

OAS Secretary General Luis Almagro has been a vocal critic of Maduro and has urged stern action against his government for the past two years. But Venezuela has maintained enough support from a handful of small countries in the OAS to block previous attempts to suspend it.

The United States has increasingly turned to sanctions against Venezuelan government and oil officials, and Pompeo urged other OAS countries to do the same.

“In addition to suspension, I call on member states to apply additional pressure on the Maduro regime with financial sanctions and diplomatic isolation until such time as it takes the actions necessary to return genuine democracy and provide people desperately needed access to international humanitarian aid,” he said.

Venezuelan Foreign Minister Jorge Arreaza defiantly criticized the OAS as part of a “corporation” led by the United States to undermine Venezuela’s sovereignty.

Arreaza accused the United States of fostering violence that has accompanied protests and the deprivation caused by sanctions, and mocked U.S. offers of humanitarian aid.

“You impose economic sanctions and then you offer your help to wash your hands,” he said. “The U.S. has been perpetrating a coup d’etat against Venezuela for 20 years.”

“We are free. We are sovereign. And no imperialist will intervene in our country and hinder our people from voting for their own authorities and having their own democracy.”

Erika Guevara-Rosas, Americas director at Amnesty International, welcomed the tough stance against the Venezuelan government but questioned whether there is the political will to push for change.

“We believe this Cold War rhetoric should not be utilized,” she said. “It gives Maduro justification when he says, ‘We are going to be attacked by the United States,’ and it doesn’t have impact on the protection of human rights.”