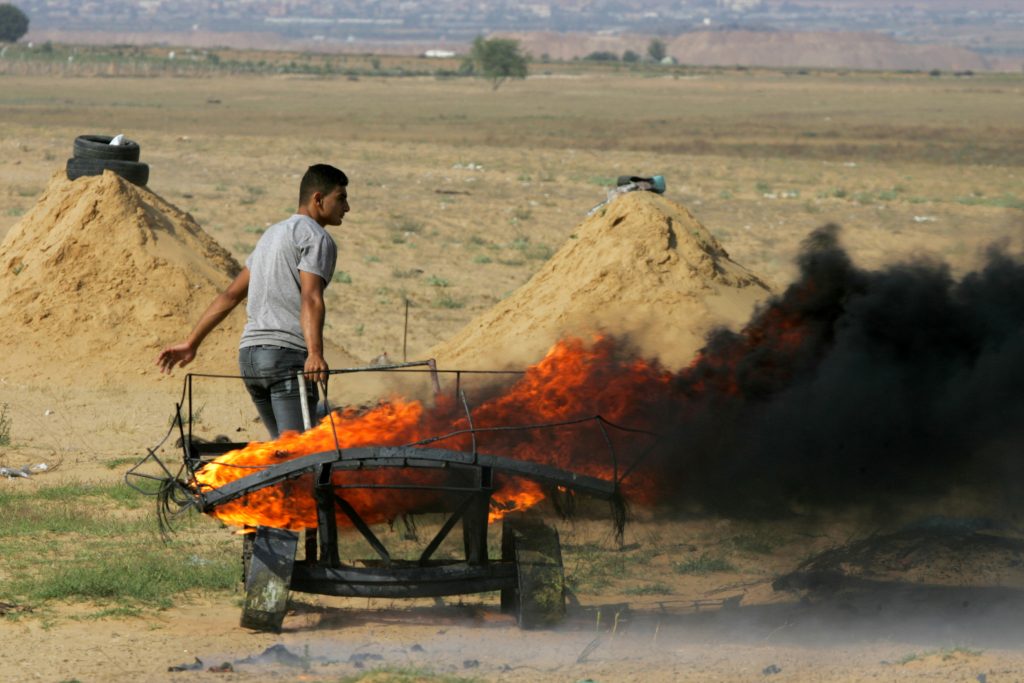 Red Alert sirens sounded Motzoei Shabbos in Gaza border communities as Gaza terrorists continued to attack Israeli civilians in the border fence area. One missile was deflected by the Iron Dome system, and the other apparently fell inside Gaza. No injuries or damage in Israel were reported. Hamas said it was investigating who was responsible for the missile fire. Gaza sources later reported that IDF planes hit Hamas positions in Gaza.

Those were the first missiles fired at Israel by Gaza since the cessation of the last round of missile fire last Wednesday, but Gaza terrorists continued to riot and set fires in Israeli forests and fields using kites and balloons equipped with flammable materials. Israeli firefighters dealt with some 20 blazes over the weekend, with one destroying some 300 dunams in the Carmi forest. At least four planes were dispatched to fight the fire from the sky. Altogether, the fires consumed thousands of dunams of forest and farmland.

Eshkol Regional Council chairman Gadi Yarkoni said Motzoei Shabbos that “the events of this weekend do not constitute ‘quiet.’ We will not accept the return of sporadic missile fire at our communities. We are in constant contact with the army, and so far there is no change in the instructions to residents.”

IDF forces on Shabbos afternoon fired at terrorists who were placing a bomb along the border fence. Gaza sources said that a number of terrorists were injured in the incident. At least one terrorist was killed in rioting at the Gaza border fence Friday afternoon, and an additional 100 were injured, including a senior member of Hamas. Mahmoud a-Zahar, 73, was taken to the hospital for smoke inhalation after participating in the riots at the border. The terrorist killed was a member of Islamic Jihad, and the terror group swore to avenge her death.

Meanwhile, a major terror attack was averted in Chevron on Shabbos afternoon. A 35-year-old terrorist from the village of Beit Omar attempted to run down an Israeli soldier using a tractor. Soldiers fired at the terrorist, who kept driving the tractor in the direction of civilians and soldiers. A soldier standing on a rooftop was finally able to successfully hit the terrorist. B’chasdei Shamayim, there were no Israeli injuries.