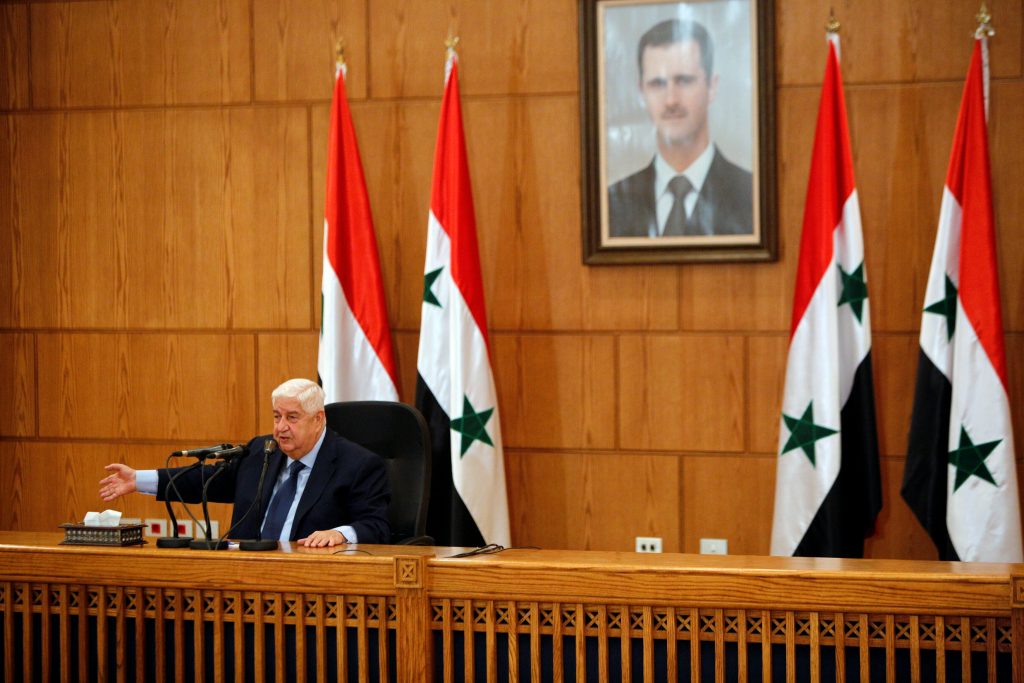 The Syrian government wants to recapture insurgent territory in the southwest through a settlement in which terrorists accept state rule or leave, the foreign minister said on Saturday.

Walid al-Moualem also said the United States must withdraw from the Tanf base in the southeast. Damascus has not engaged in talks about the south, and any agreement over that region must include the pullout of U.S. forces, he said.

The southwest, near the borders with Jordan and Israel, remains one of the big chunks of Syria still outside the control of the state, which has recovered swathes of the country with the help of Russian jets and Iran-backed militias.

Since last year, a “de-escalation” deal, which Russia, the United States and Jordan brokered, has contained fighting there. Washington has voiced concern about reports of an impending army offensive, warning of “firm and appropriate measures” in response to any violations of the ceasefire.

U.S. forces are based in a southern desert pocket further east at Tanf, a strategic highway border crossing with Iraq.

Moualem said the Syrian military had dropped leaflets calling on terrorists in the southwest to either surrender their weapons and settle with the state, or leave.

“We seek, initially, to solve this issue in the ways we have got used to working with, which are reconciliations. If it does not work, that’s a different conversation,” he told a news conference in Damascus.

Russia has said that only Syrian army troops should be at the southern border with Jordan and Israel, which has waged airstrikes in Syria to curb what it fears is Iran’s expanding influence.

Tehran supports Moscow’s efforts to impose Syrian government control over the south, a senior Iranian security official was quoted as saying on Saturday.

Moualem added that that Damascus had communicated with the U.S.-backed Syrian Democratic Forces but no negotiation process had started over the fate of their territory in the north and east.

He said Raqqa city, which the Kurdish-led SDF militias seized from Islamic State with U.S. support, “must be rebuilt and liberated” from any foreign presence.