More than 1,600 people, including at least two dozen elected officials, judges and dignitaries, as well as representatives of close to 50 yeshivos, turned out at the Hilton New York to take part in “A Movement In Time,” a dinner honoring the accomplishments of Agudath Israel of America. 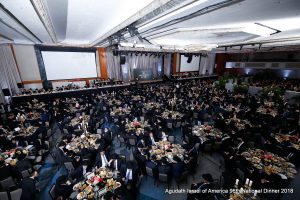 Guest of honor Shlomo Werdiger, chairman of the Agudah’s board of trustees, was lauded throughout the evening for his exemplary philanthropy and relentless efforts on behalf of the Torah community, which have yielded tremendous results. He was presented with a painting of himself with the late Agudah president Rabbi Moshe Sherer, z”l. In his remarks, Mr. Werdiger spoke of the importance of each individual recognizing their own ability to make a difference in the lives of others.

Mr. Mendy Klein, z”l, had been designated to receive the National Leadership Award at this event, but just weeks ago he suddenly passed away. Harav Shmuel Kamenetsky, Rosh HaYeshiva, Talmudical Yeshiva of Philadelphia and member of the Moetzes Gedolei HaTorah, recalled Mr. Klein’s passion for seeing to the needs of others. Harav Elya Brudny, Rosh Yeshivah, Mirrer Yeshiva, praised Mr. Klein’s exceptional humility. A memorial video was shown, in which several of the Klein children described the scope of their father’s tzedakah activities and spoke of his legacy.

Also noted with emotion and respect were the recent losses of Harav Simcha Bunim Ehrenfeld, zt”l, Matersdorfer Rebbe and member of the Moetzes Gedolei HaTorah, and Harav Zecharia Gelley, zt”l, Mara d’Asra, Khal Adath Jeshurun and member of the Nesius of Agudath Israel. Mrs. Aliza Grund, a”h, long-time president of N’shei Agudath Israel of America, was warmly recalled for her many activities on behalf of the community.

The theme “A Movement In Time” was echoed by multiple speakers who recounted the Agudah’s many successes throughout the years, shifting its focus and creating new initiatives to match the evolving needs of Klal Yisrael. Also emphasized throughout the program was the changing face of the Agudah, whose seasoned members have seen an influx of fresh, younger faces who are eager to become involved in the movement that has bettered the lives of the Jewish community.

Rabbi Chaim Dovid Zwiebel, the Agudah’s executive vice president, explained that far from being just an organization, the Agudah is a movement whose very existence is dedicated to meeting the challenges of the Torah community.

NY Senate Majority leader John Flanagan addressed the event. He praised both the Agudah and its chairman, Mr. Werdiger, describing the satisfaction he gains by working together with the Agudah and the Orthodox Jewish community, building upon shared values.

The evening concluded with a musical tribute to Mr. Werdiger, a poignant song performed by Rivie Schwebel, a member of the Agudah’s board of trustees. The feature presentation, A Movement in Time music video, illustrated the message of the evening: that just as an orchestra can only achieve true beauty when its many components work in tandem, the Agudah’s accomplishments are the result of the combined efforts of the many individuals who use their own talents to contribute to Klal Yisrael.

The final words of the night were delivered by Mr. Werdiger, who described the Agudah as the guiding light that has helped the Torah community navigate its through the ever-changing landscape.

“Through good times and difficult ones, the Agudah has illuminated the way for Klal Yisroel,” said Mr. Werdiger. “Together with the many new faces who have joined our ranks, we will continue the mission that has defined us for nearly one hundred years for generations to come.”