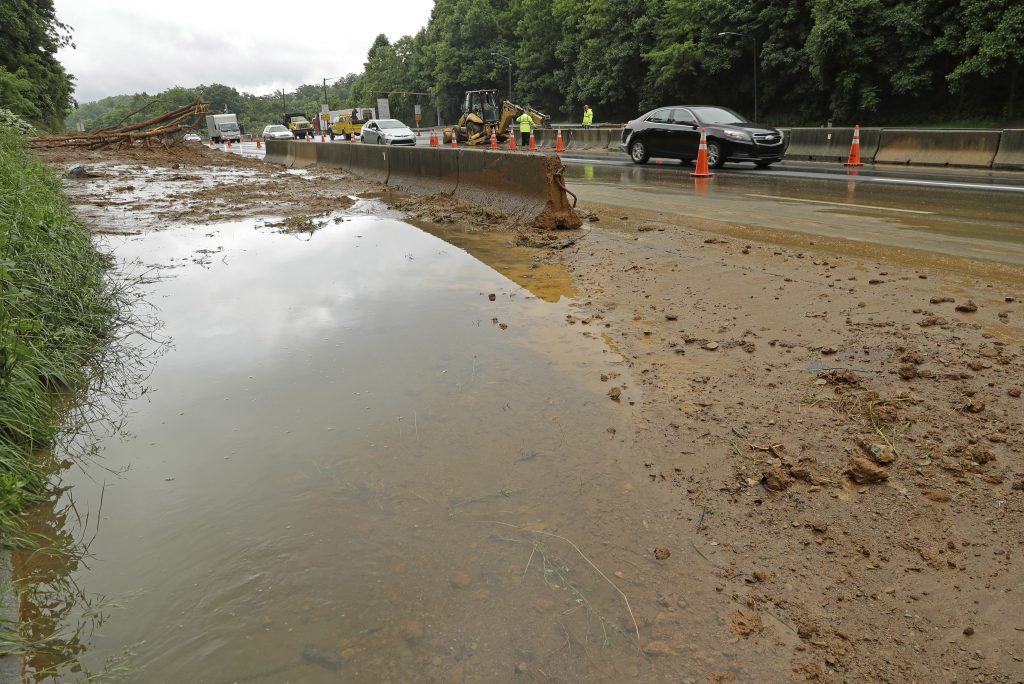 Mudslides triggered by the soggy remnants of Alberto forced evacuations below a dam early Wednesday and closed a highway in western North Carolina as the center of the storm lashed the nation’s midsection hundreds of miles away.

About 2,000 people were evacuated for several hours after emergency managers said the Lake Tahoma dam was in danger of “imminent failure.” Heavy rain triggered landslides at the dam and along Interstate 40, which was closed near Asheville.

Engineers inspected the dam further in daylight and McDowell County officials announced in a public alert just after 10 a.m. Wednesday the dam was safe and people could return to their homes.

The evacuation was ordered because engineers wanted to play it safe until they could do more inspections after sunrise, McDowell County Emergency Management deputy director Adrienne Jones told The Associated Press.

Several schools were closed in western North Carolina because of flooding.

The center of a depression that had been Alberto was about 400 miles west near Hopkinsville, Kentucky, where Sherry Key had a fitful night of sleep because of high winds and heavy rains.

“I have dogs and they’re terribly afraid of storms, so they were on top of me all night,” said Key, an airport office manager.

Radar showed rain extended as far south as the Gulf Coast, where the storm came ashore at the Florida Panhandle on Monday, to the Great Lakes region.

Forecasters warned the leftovers of the Atlantic hurricane season’s first named storm were still capable of causing treacherous flooding as heavy precipitation spreads deeper into the nation’s midsection. Flash flood watches and warnings were in effect for parts of several states from Alabama through Tennessee, Kentucky, Illinois, the Carolinas and Virginia and West Virginia.

The weather service at the Greenville-Spartanburg airport in South Carolina said the rainfall of 1.76 inches on Tuesday broke a record dating to 1976.

In the mountains of western North Carolina, Jones said about 200 residents spent the night in three shelters, set up in Marion, Old Fort and Glenwood. She said five minor injuries have been reported during water rescues as creeks and streams overflowed their banks and rock slides closed roads.

The big, messy storm caused more than 25,000 power outages in Alabama, many of which were caused by trees rooted in soggy soil falling across utility lines.

“We’ve had a lot of rain, but we got lucky. It was a constant rain but not a heavy rain,” said Regina Myers, emergency management director in Walker County northwest of Birmingham.

Alberto was more of a rainstorm than a wind threat, but the National Weather Service said at least one tornado had been confirmed.

The weather service said its meteorologists confirmed a weak tornado with maximum winds of 85 mph hit an area around Cameron, South Carolina, on Monday afternoon. No one was hurt.