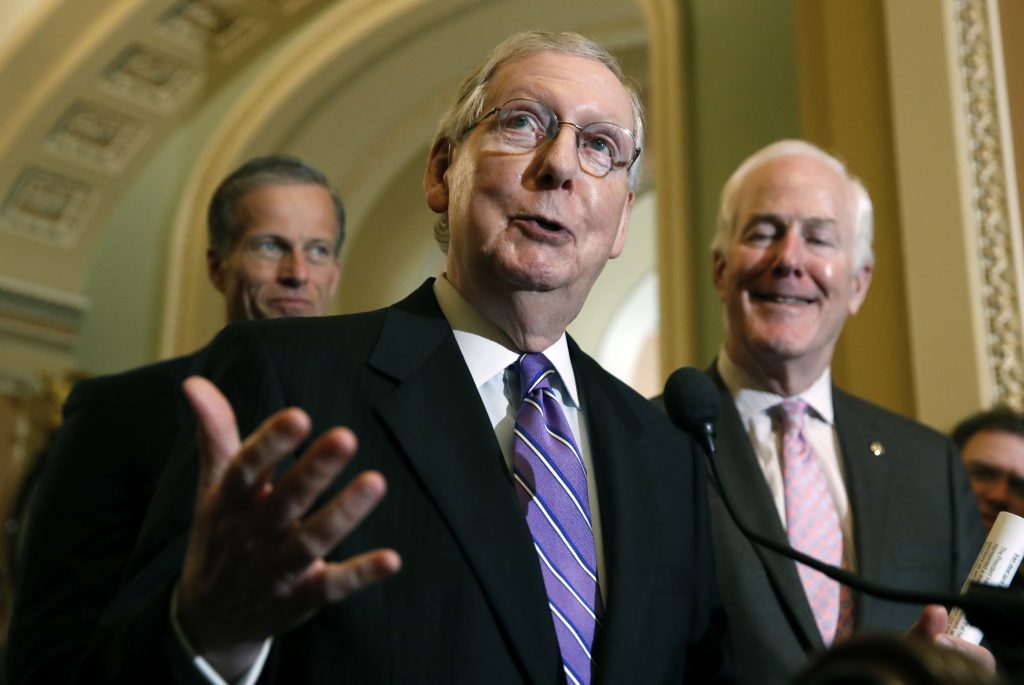 McConnell did not seem to envision a summer full of votes on “gotcha” amendments targeting vulnerable senators (almost entirely Democrats in 2018).

“I’m not particularly interested in just having point-scoring amendments, although some of the bills that I call up are open for amendment and people may, on both sides, may do some of that,” McConnell said. “I’m mainly interested in scoring points, putting points on the board, passing bills that will be signed into law.”

Among the items not on the summer agenda? A floor debate over an updated authorization for the use of military force, or AUMF, with an uncertain outcome.

“Without presidential support, I can’t imagine I would call up an AUMF,” McConnell said. “It would be a debate reminiscent of the week we spent on immigration back in February which, you know, we spun our wheels for a week and passed nothing.”

“I don’t have the time … to waste on things that are going nowhere,” McConnell said.

Foreign Relations Chairman Bob Corker of Tennessee and Democratic Sen. Tim Kaine of Virginia have led the drafting of a compromise AUMF that’s been the subject a Foreign Relations Committee hearing, but the joint resolution has skeptics on both sides of the aisle.

“If it came out of the House and the president said he was for it, I’d obviously consider it,” he said. “What I’m not interested in doing is having another week, and certainly not more than one week, as I said yesterday, spinning our wheels and getting nowhere.”

McConnell was well aware, however, that related issues like funding for Trump’s desired wall at the border with Mexico might well come up as part of appropriations amendment debate.

Speaking with Roll Call in an interview just ahead of Memorial Day, McConnell also reiterated that he would not have floor time available for potential House-passed immigration-related legislation unless President Donald Trump indicated he would sign such a measure, and even then might want more assurance the bill would have the votes to get past filibuster threats in the Senate.

McConnell has maintained his seat as a senior member of the Appropriations Committee during his time as leader. He is substantially involved in the process of trying to work with the House so that bills arrive from the other side of the Capitol building in a way that minimizes obstacles in the Senate.

“From a parliamentary point of view, they need to bunch them before they come over to us, but the goal is to move as many of the bills as we can in minibuses of two or three bills each,” McConnell said. “We’re in coordination with the House.”

So far, procedural objections appear to be under control.

“We anticipate, for example, in the Senate being able to get on these bills without a motion to proceed, which would be a great step in the right direction by the minority,” McConnell said. “There seems to be pretty broad agreement across party lines that we want to get these bills done and not have the ending that we had last year.”

The best-made plans could certainly go off track, as attempts to get the spending bills processed on time almost always do. But that may be part of the majority leader’s talking about the possibility of curtailing the 2018 August recess.

But McConnell seems to be on a mission to avoid calling up measures that will face blockades, at least for now.

“I’m not into playing games this summer. I want to accomplish things, and everything I’ve mentioned to you that we’re going to be working on are things that we need to do,” McConnell said.

It probably helps that McConnell has only one incumbent Republican with a hotly contested re-election campaign this year: Nevada Sen. Dean Heller.

Every one of the races on the majority leader’s “offense” scorecard features a Democratic senator seeking another term.

The aggressive legislating will have to work within the confines of limited time for floor debate. McConnell plans to continue prioritizing confirmation of judicial nominations. And there is another nomination to Trump’s Cabinet to consider as well.

Senate Veterans Affairs Chairman Johnny Isakson of Georgia told reporters last week he would be working to schedule a hearing early in June on the nomination of Robert Wilkie, the current undersecretary of defense for personnel and readiness, to be VA secretary.

Wilkie has been serving as the acting VA secretary.

In other interviews last week, including with Fox News, McConnell advised people who serve and work on the Senate side of the Capitol not to make firm summer vacation plans, given the possibility in session.

“I’ll have more to say definitively about that the week after next, but I’ve said to all the press corps and the members up here I wouldn’t buy any nonrefundable tickets.” McConnell said.