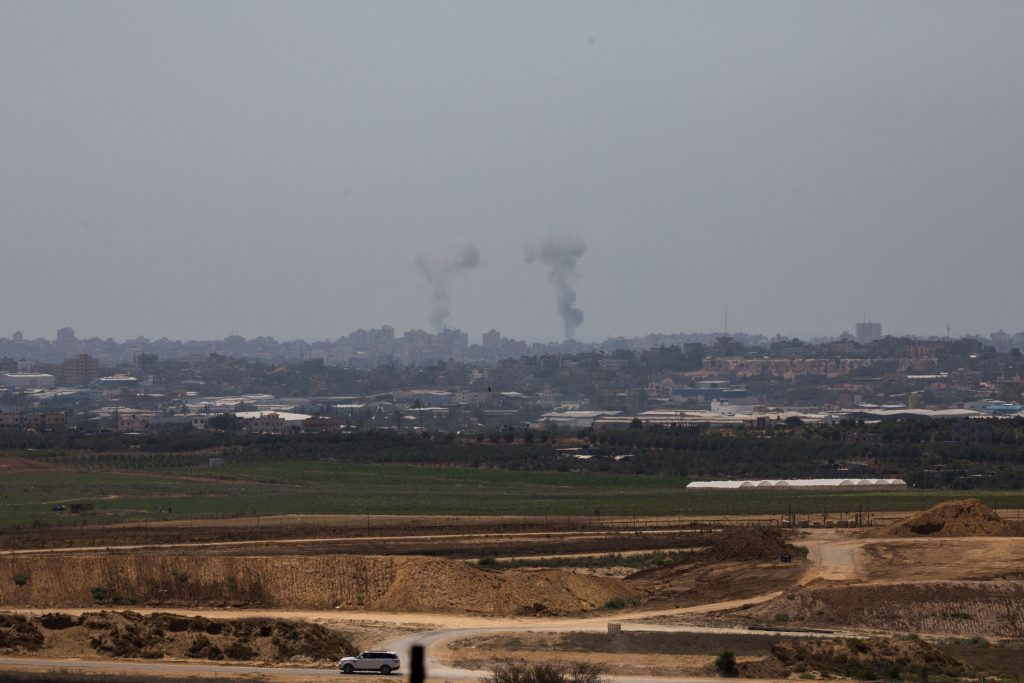 The United Nations Security Council issued a statement on Tuesday night joining the U.S. and the European Union in condemning the attacks on Israel by Hamas and Islamic Jihad.

“The rocket and mortar fire by Palestinian militants from Gaza towards Israel must stop immediately,” the council said in a statement.

“Indiscriminate attacks against civilians are completely unacceptable under any circumstances. A de-escalation of this dangerous situation is urgently needed to ensure that civilians’ lives are protected,” the statement said. “Israelis and Palestinians both have the right to live in peace, security and dignity: the cycle of violence and despair has to be broken with a genuine political process.”

Earlier, Israeli Ambassador to the U.N. Danny Danon submitted a written request to the Security Council and the secretary general to speak out against the rocket fire from Gaza.

“For weeks we have warned that the violent riots along the security fence with Gaza, that included IEDs and the firing of weapons at our security forces, were not spontaneous protests, but rather part of a coordinated violent attack against the State of Israel,” he wrote. “The shells and rockets fired at our citizens leave no doubt to the true intentions of those who incited, encouraged, and even paid for those ongoing riots.”

The United States later called for an emergency U.N. Security Council meeting on the Gaza situation, to be held on Wednesday.

“The recent attacks out of Gaza are the largest we have seen since 2014. Mortars fired by Palestinian militants hit civilian infrastructure, including a kindergarten. The Security Council should be outraged and respond to this latest bout of violence directed at innocent Israeli civilians, and the Palestinian leadership needs to be held accountable for what they’re allowing to happen in Gaza,” Ambassador Nikki Haley said in a statement.

Israel’s Foreign Ministry took some of the credit for an exceptionally sympathetic reaction from the international community, as it mobilized diplomats around the world to get the message across.

Israeli diplomats were asked to “stress that this is an attack by a terrorist organization against civilians, in which, regretfully, there are injuries and from whence [we derive] our right to self-defense,” Foreign Ministry spokesperson Emmanuel Nahshon said Tuesday afternoon.

As of Tuesday, 8 p.m. Israel time, over 70 rockets and mortars were fired at southern Israel by terrorists in the Gaza Strip, including some manufactured by Iran. Five Israelis were injured, one requiring surgery.

Hamas and Islamic Jihad have taken responsibility for the attacks.

Despite local media reports that Egypt has mediated a return to the ceasefire in place since the 2014 Gaza war, quiet had still not returned to the border towns as of Tuesday night. At about 9 p.m., after a respite of nearly an hour, sirens blared again in the Eshkol region, sending residents into bomb shelters. Around 11 p.m., sirens went off in Ashkelon, but the municipality said it was a false alarm.

Local residents said they heard loud explosions, but so far the IDF said they have no evidence of any rockets or mortar shells from across the border.

Meanwhile, the military was saying that the crisis is not over yet.

“What we saw today is a serious terror attack, that is how we are considering it,” IDF Spokesman Brig-Gen. Ronen Manelis said at a press conference Tuesday evening. “We see Hamas firing dozens of rockets, and we have no intention of allowing this to continue.”

“We have conducted airstrikes, the most serious since Operation Protective Edge, against dozens [of] Hamas and Islamic Jihad terror targets, a terror tunnel, training camps and storage facilities,” he said.

“We have no intention of stopping the strikes so long as the rocket fire continues,” Manelis said.

“The terrorists know what resources they have lost today, and their leadership is hiding because they know what our abilities are,” he added.

Israeli officials were preparing the country for business as usual on Wednesday, but with precautions.

Schools are expected to open as normal, though with increased security protection, in Israel’s Eshkol region, which was pelted with dozens of mortar shells throughout the day.

However, residents have been instructed to remain within close distance of a bomb shelter, in accordance with a directive from the IDF.

School buses will operate as usual, “but with an increased presence of security forces,” the local council said in a statement.

Farmers will be allowed in their fields as usual.

The Eshkol council says another situational assessment will be held tomorrow at 6:30 a.m. and that following it, residents will be updated.

The IDF imposed restrictions on congregating in Sderot, which has been under fire. Gatherings of up to 500 people will be allowed in open spaces, in closed spaces up to 1,000 people.

Sderot Mayor Alon Davidi instructed the members of the city’s Educational-Psychological Services to devote the first hours in schools tomorrow morning to a discussion on the situation and identification of anxiety symptoms.