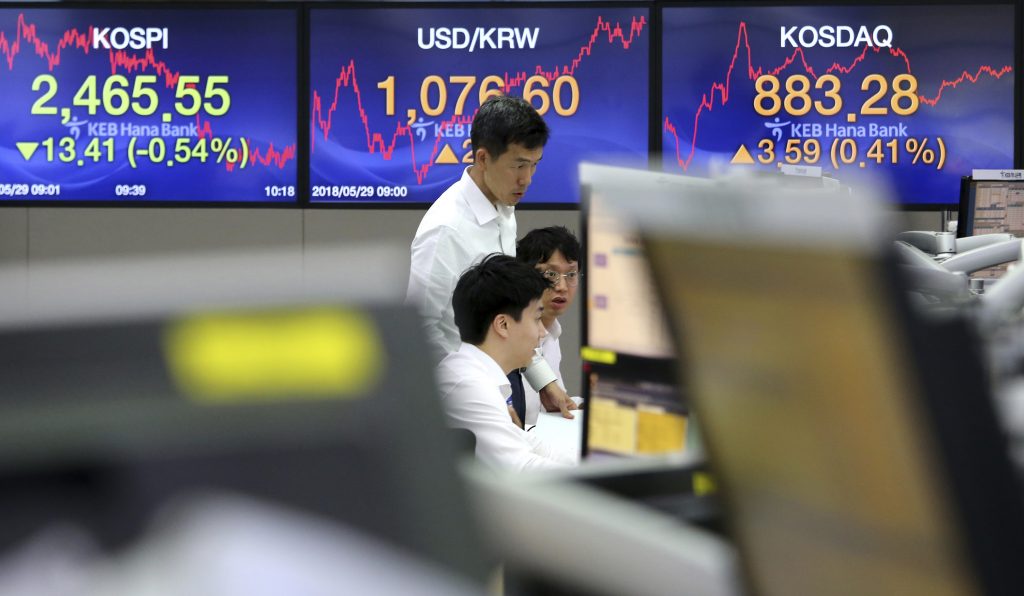 Asian shares fell on Tuesday and the euro struggled near 6½-month lows as early elections loomed in Italy, although a revival in diplomatic talks with North Korea and a retreat in oil prices supported sentiment.

Adding to the uncertainty, Spanish Prime Minister Mariano Rajoy will face a vote of confidence in his leadership on Friday.

All that hit risk appetite, sending MSCI’s broadest index of Asia-Pacific shares outside Japan down 0.4 percent after three consecutive sessions of gains.

E-Mini futures for the S&P500 also gave up early gains.

Japan’s Nikkei skidded 0.6 percent. Chinese shares were in the red, too, with the blue-chip down 0.6 percent and Hong Kong’s Hang Seng index off 0.7 percent.

Liquidity was relatively thin with public holidays in Singapore, Malaysia, Indonesia and Thailand.

“The market has turned its focus to the continuing political situation in Italy,” said Nick Twidale, Sydney-based analyst at Rakuten Securities Australia.

“This should keep the risk trades pressured to the downside,” Twidale added.

“[The] focus will remain on the on-again, off-again, U.S.-North Korean summit and the U.S.-China trade relationship as we move through the Asian trading session.”

The reports indicate that planning for the historic summit, initially scheduled for June 12, is moving ahead after Trump called it off last week. A day later, Trump said he had reconsidered, and officials from both countries were meeting to work out details.

The dollar rose 0.2 percent against a basket of major currencies to stay near the highest since mid-November.

In a sign that investors were flocking to safer bets, U.S. 10-year Treasuries opened at six-week lows at 2.886 percent after a U.S. holiday on Monday.

Analysts will next focus their attention on U.S. inflation data due later in the week which could provide clues to future interest-rate rises ahead of the Federal Reserve policy meeting next month.

Oil prices remained under pressure from expectations that Saudi Arabia and Russia would pump more crude, even as U.S. oil output rises.

U.S. crude futures tumbled to six-week lows and looked set for a fifth straight day of declines. The July contract was last down 1.6 percent at $66.81 a barrel.

Brent crude futures edged up 0.3 percent after dropping to $74.49 per barrel on Monday, their lowest in about three weeks. They were last at $75.53.