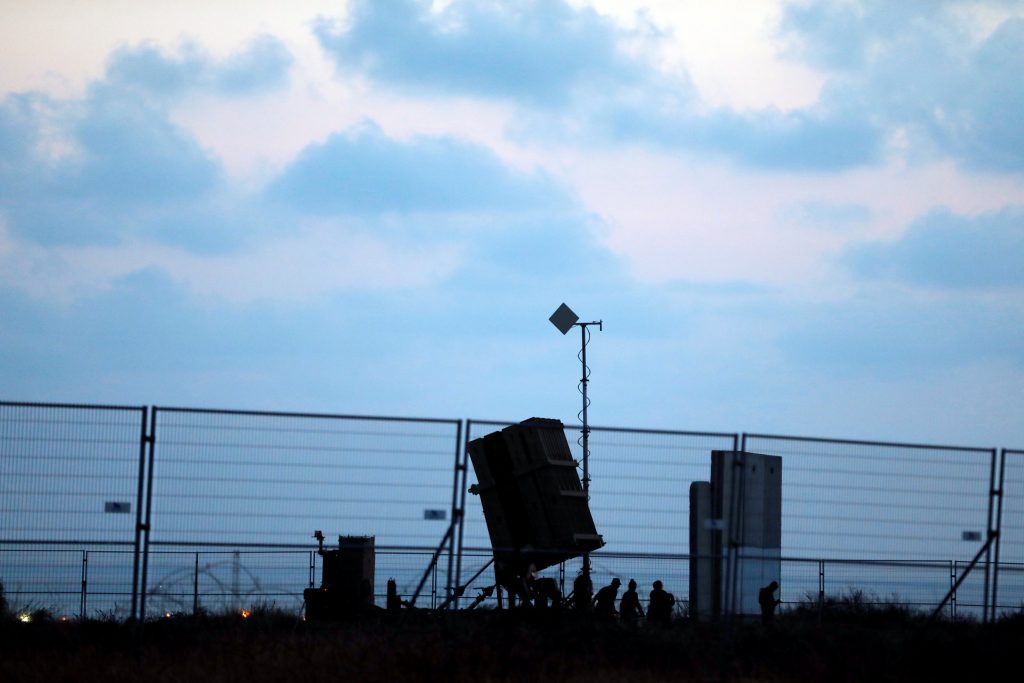 Gazan rocket and mortar attacks on southern Israel ebbed by evening on Tuesday, after two of the heaviest barrages in several years.

Air raid sirens sounded in Kissufim, Nirim and Ein Hashlosha, all in the Gaza periphery, at about 8 p.m., triggered by incoming mortar rounds. At least two mortar shells reportedly landed in an open area in the Eshkol Regional Council. B’chasdei shamayim, no injuries were reported and no damage was done.

The Palestinian terrorist groups Hamas and the Islamic Jihad finally took responsibility together for the attacks earlier on Tuesday which injured 5 Israelis. One of them, a soldier, hit by shrapnel in the morning attack and listed as in medium condition, was undergoing surgery.

Overall, approximately 60 rockets and mortar shells were launched into Israel from Gaza, prompting dozens of retaliatory strikes by the IDF against terrorist targets. The IDF warned that its response would be “intensified” if needed.

Intelligence Minister Yisrael Katz told Army Radio on Tuesday evening that this was the closest the country has come to war in Gaza since the 2014 war with Hamas.

“We are now the nearest we’ve been to the brink of war since Operation Protective Edge,” he said. “We don’t want it and the other side doesn’t either, but we have a red line.”

Katz said he believed the coming hours could see “an escalation” in violence. “Whether it crosses the brink of a war we don’t want and they don’t want — that’s up to them and only them,” he said.

Energy Minister Yuval Steinitz warned that Israel could be forced to “conquer Gaza” if the violence did not abate.

“We may not have a choice, and we’ll be forced to hit Gaza and conquer it in order to end this terrorist regime once and for all,” Steinitz, a member of the security cabinet, told Ynet.

The minister stressed also that Israel would prefer to pacify Gaza without resort to further military measures. Israel needs to “consider the humanitarian situation in Gaza … we need to think of how to implement a more comprehensive solution that will bring about a fundamental change in the situation in Gaza,” Steinitz said.

Israeli Prime Minister Binyamin Netanyahu was scheduled to meet with senior defense and security officials on Tuesday night for an assessment of the situation.

The IDF Chief of Staff Gabi Eizenkot and other senior officers met with the heads of local governments in the Gaza border region during the intermittent barrages on Tuesday.

“During the meeting, the commanders updated the local government officials about the army’s assessments of the situation; and they spoke about the preparedness of the communities and the civilian home front,” the army said in a statement.

“The chief of staff expressed his great appreciation for their leadership and the civil resilience being shown by the leaders and the citizens of the Gaza region.”

MK Isaac Herzog, head of the opposition in the Knesset, appealed to the U.N.’s secretary general for a “public condemnation by the UN of aggressive terrorist activities of the Hamas organization and the other terrorist organizations in the Gaza Strip against Israeli citizens in the Gaza border communities.”

Avi Gabbay, chairman of the Labor Party, said that the Israeli government is instrumental in Hamas’s continued survival. “Since the last round, Protective Edge, our government has not made any move to prevent” further escalation, Gabbay charged.

He added that the lack of a peace process “and the fact that there is no leadership that has succeeded in creating regional alliances to fight terror simply keep Hamas alive.”

“This escalation did not come from nowhere. Gaza is suffering under siege, and instead of finding real solutions, Netanyahu is choosing to fan the flames under this pressure cooker,” he said.

Meanwhile, the IDF urged the public to refrain from spreading false rumors on social media outlets that are claiming Israel has decided to launch a full-scale military operation. The IDF said the rumors were false.