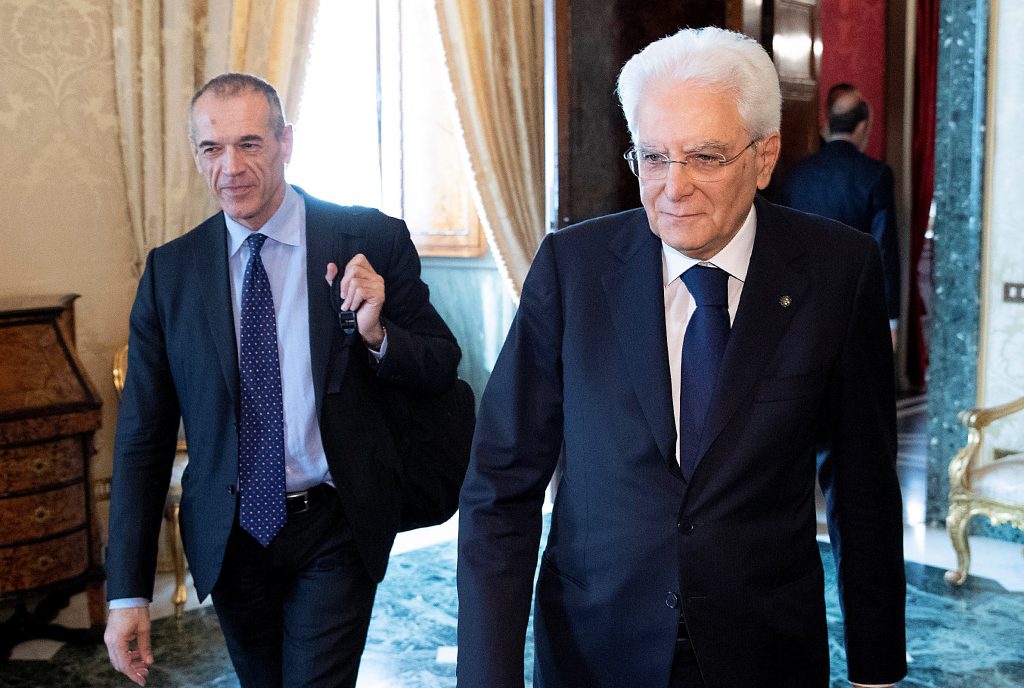 The specter of a financial crisis came back to haunt Italy on Tuesday, as its markets plunged on fears that it is heading toward another election that could shape up to be a referendum on whether to stay in the common currency.

Carlo Cottarelli, a former IMF official, was tapped as premier of a non-political government of technocrats after an attempt by two populist parties to form a government foundered. The president, who in Italy appoints the premier and ministers, had opposed the populists’ choice of a Eurosceptic economics minister.

Cottarelli was expected to submit his list of ministers to President Sergio Mattarella on Tuesday, but left the president’s office without comment after about an hour, unexpectedly delaying the formation of a government. A spokesman for Mattarella said the two would meet again Wednesday morning, and that Cottarelli needed more time to work on the Cabinet.

The Cottarelli government, which would see Italy through a period of uncertainty, seems doomed even before it’s created. The populist parties, which got the most votes in the inconclusive March election, have promised to vote against it in a confidence vote. That would force Italy to new elections in the late summer or early fall.

The anti-establishment 5-Star Movement and the anti-euro League have been emboldened by the president’s dismissal of their government in favor of an unelected group of technocrats. They say it shows the establishment ignores the popular vote.

That could raise the stakes for the next election by making it more clearly about whether Italy should reconsider its membership in the euro.

“Italy will be wrapped in a long-drawn-out period of wrangling that will feature intense anti-establishment and Eurosceptic tones,” said political analyst Wolfango Piccoli. He said that while he doubted either populist party would embrace a clear euro-exit platform, they would be more combative toward Brussels.

The Milan stock index closed down more than 2.7 percent, burning 17 billion euros in capitalization; and Italian bonds suffered a plunge reminiscent of the worst days of the financial crisis of 2011. The government’s borrowing rate for two-year money more than doubled, to 2 percent, indicating a surge in investor concern. The 10-year yield rose to near 3 percent, according to FactSet.

“We should now call this a crisis,” said Kit Juckes, an analyst at Societe Generale.

Ratings agency Moody’s warned that it would cut Italy’s rating — now just two notches above junk level — if the next government doesn’t present a budget that puts Italy on a trajectory to reduce its debt, now at 132 percent of GDP, the second highest rate in the eurozone after Greece.

If Cottarelli does not pass a vote of confidence, as is nearly certain, his government would not get a chance to set out such a budget.

In an annual speech on the state of the Italian economy, Bank of Italy governor Ignazio Visco tried to sound a warning against the tide of populism, saying that “Italy’s destiny is that of Europe.”

“We are part of a very large and deeply integrated economic area, whose development determines that of Italy and at the same time depends on it,” he said. “It is important Italy has an authoritative voice in forums where the future of the European Union is decided,” Visco said, referring to upcoming EU decisions regarding the governance of the bloc, multi-year budgets and the revision of financial rules.

Visco warned that investors would flee the system if they see their wealth eroded because of an economic crisis, noting that “foreign investors will follow suit even more quickly. The financial crisis that would ensue would put us back significantly. It would taint Italy’s reputation forever.”

Addressing populists who have raised fears that outside forces are calling the shots in Italy, he said, “we are not constrained by European rules, but by economic logic.”