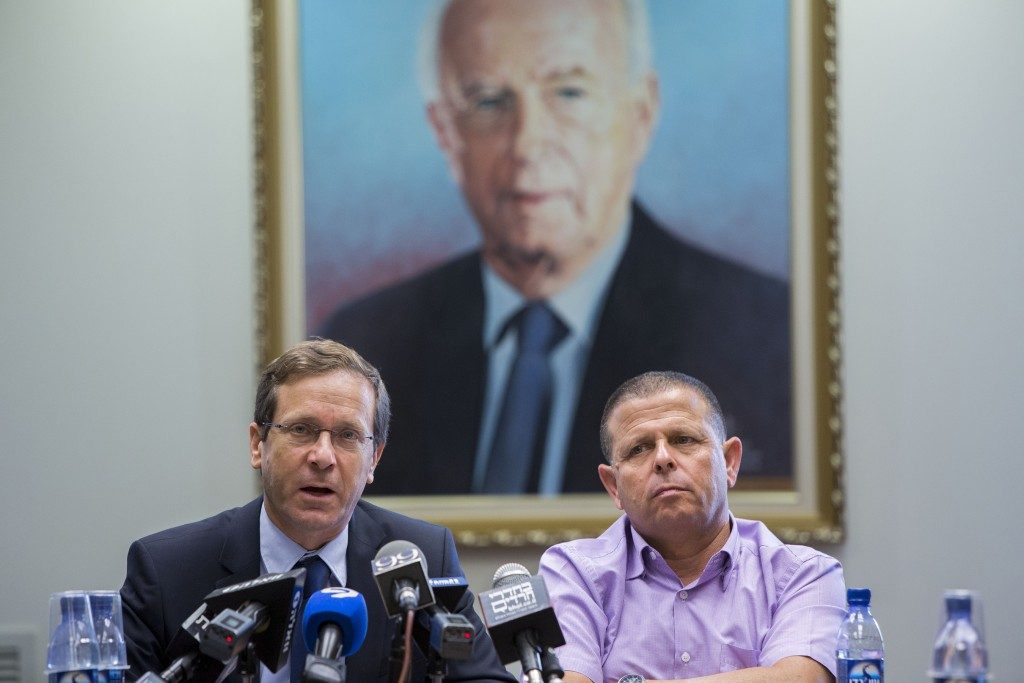 The Israeli center-left is disintegrating.

After spending all but six of the past 40 years in the opposition, it is beginning to question whether the time has come to join the rest of the Israeli public in giving up on the peace fantasy that Oslo represents.

The premise behind the 1993 Oslo accords — that there is a partner on the Palestinian side that recognizes Israel’s right to exist as a Jewish state and is willing and capable of negotiating a two-state solution that ensures its continued existence — was flawed. Oslo is dead, not just according to the political right, but even for leading politicians and intellectuals on the left.

The latest prominent leftist to rain on the peace parade is Zionist Camp MK Eitan Cabel, who, in an op-ed in the far-left Haaretz newspaper Friday, called on his colleagues in the party to “sober up” and shed their blind faith in land-for-peace.

Noting that Labor has lost seven of the last eight elections, Cabel warns that only if the party adopts “a worldview that reflects reality” will it earn the public’s trust and be returned to power.

According to the MK, who served as Labor’s secretary general and was close to Yitzchak Rabin and Shimon Peres, the fathers of Oslo, Israel “cannot wait for the Palestinian side because Abu Mazen [PA chairman Mahmoud Abbas] has already given up on the two-state solution.”

Cabel isn’t the first Labor politician to express such heretic thoughts about the peace process. In April 2016, then-Zionist Camp leader Yitzchak Herzog (the Zionist Camp is the Labor Party in a repackaged, slightly enlarged format) acknowledged that the two-state solution is not realistic at this time.

“I don’t see the ability to apply, right now, a two-state agreement,” Herzog told Army Radio in an interview that earned him the wrath of the party faithful.

Herzog’s successor as party leader, Avi Gabbay, also touched a raw nerve in the peace camp when he said there’s no need to evacuate a single settlement in the framework of a peace deal. “If you are making peace, why do you need to evacuate?” he asked, questioning a central tenet of the Oslo accords that two states for two peoples mean no Jews in the Palestinian state (but plenty of Arabs in the Jewish one).

“I think the dynamic and terminology that have become commonplace here, that ‘if you make peace — evacuate,’ is not in fact correct,” he said. “If you make a peace deal, it is possible to find solutions that don’t require evacuating.”

And it isn’t only the politicians on the left who have had an epiphany but its leading men of letters, as well. Author A.B. Yehoshua conceded in an article published in Haaretz in April that the two-state plan is no longer relevant.

“For 50 years, that is, for most of my adult life, I worked tirelessly for the two-state solution. … In the face of countless frustrations generated by both the Israeli government and the Palestinian Authority,” he wrote, adding, “I too, along with the entire peace camp, hoped that the international community, and particularly the United States and Europe, would exert economic and diplomatic pressure on both sides so as to force them to find the way to a historic compromise to one of the most persistent and complex disputes in the world since the start of the 20th century.”

To his credit, Yehoshua doesn’t put the blame solely on Israel’s shoulders. “Prior to his stepping down, [then-Prime Minister Ehud] Olmert initiated a detailed and generous plan to divide the land of Israel into two states, but [PA chairman] Abu Mazen [Mahmoud Abbas], according to Olmert’s testimony, avoided most of the meetings which were meant to discuss this plan.”

“Therefore,” Yehoshua concluded, “we must try to examine the reality with intellectual honesty and try to think of other solutions that will stop this process and drag it back. It is not the Jewish and Zionist identity of the State of Israel that is now in danger but rather the humanity of the Palestinians under our rule.”

To be sure, Cabel and the others aren’t calling for a complete “surrender” to the political right, but rather a retreat from Oslo. Cabel wants to see Israel annex the “settlement blocs,” the clusters in Yehudah and Shomron with large populations like Gush Etzion, the Ariel area, Karnei Shomron and the city of Maaleh Adumim, home to 300,000 Jews, and freeze building in other areas to show that it is serious about negotiating if and when the Palestinians get serious.

This proposal, which challenges the traditional Labor view that Israeli sovereignty can only be applied in the context of negotiations with the Palestinians, will make it clear that “what is beyond the new line will be subject to negotiations between us and the Palestinians,” Cabel argues.

This dramatic development, which is seeing more and more left-wing politicians changing direction so that they can “lead” the people, is a testament to the healthy skepticism of the Israeli public, which never bought into the land-for-peace myth and which never accepted the notion that the so-called Palestinian problem is the biggest threat facing the country, or the scare tactics that not solving it will lead to international isolation.

The problem for Cabel and the rest of the Labor Party is that it may be too little, too late.