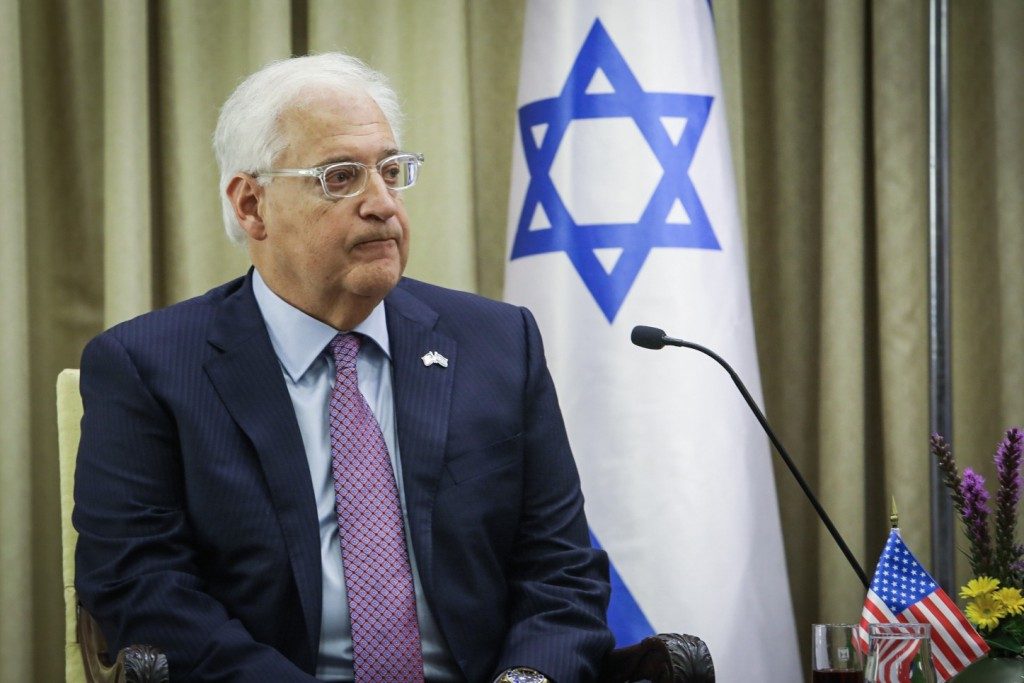 When Ambassador David Friedman agreed to pay a visit to the Bnei Brak headquarters of a non-profit organization that provides educational and developmental assistance to learning-disabled children, it was intended to be a kind gesture by a good friend.

If all would have gone as planned, it would have made for a nice photo-op for an organization that is doing wonderful work, and a rather uneventful stop on Mr. Friedman’s itinerary. After presumably making small talk with the employees, the affable Mr. Friedman was smiling broadly for the cameras, when an employee of the organization thrust a large poster in front of him with an aerial view of Har HaBayis. It didn’t occur to Mr. Friedman that he was about to become the victim of a cruel stunt: Unbeknownst to the Ambassador — or the leadership of the organization — the picture had been doctored. The Dome of the Rock Mosque had been graphically removed, and in its place, a rendering of what an artist thought was an image of the third Beis Hamikdash was put in its place.

It didn’t take long for a website to make the reckless decision to post the picture, and within hours it had become an international scandal.

Mortified, the organization in question released a statement apologizing profusely to Ambassador Friedman and the U.S. Embassy in Israel. It stressed that the poster was not approved by the organization, nor by the embassy or the ambassador.

“We wish to thank Ambassador David Friedman and the embassy staff for the professionalism and generosity they showed in the visit … to highlight the important work we do to change lives for the better. To our regret, the event was overshadowed by a cheap political act. The employee responsible for that has been identified and has apologized, and we will deal with the issue internally in the organization,” the statement concluded.

For its part, the embassy released a statement saying that the Ambassador “was not aware of the image thrust in front of him when the photo was taken. He was deeply disappointed that anyone would take advantage of his visit to Bnei Brak to create controversy.”

Speaking later to the media, Mr. Friedman declared that he “was more mortified than anyone else — than any Palestinian — when I saw a picture of myself next to that poster… Somebody just shoved it in front of me and took a picture. Of course this is unacceptable to me — and that the U.S. respects the status quo on Haram al Sharif, it’s just an unfortunate thing and I felt terrible that people might have reacted to that the way they did.”

Had they been consulted, the overwhelming majority of the residents of the chareidi city of Bnei Brak would have responded with similar outrage at the unauthorized and indefensible actions of this employee. This appalling and most regrettable act was the height of ingratitude: Mr. Friedman not only represents a government that is the quintessential malchus shel chessed, but he is the personal representative of a president who has shown extraordinary friendship to the Jews of Eretz Yisrael. Mr. Friedman himself has also proven to be a loyal and caring friend.

Furthermore, Torah-observant Jews are well aware that our greatest spiritual leaders have ruled that Jews are — at the present time — prohibited even to ascend Har HaBayis, and vehemently oppose the misguided efforts to enter this area. We are similarly prohibited from taking any unnecessary step that would enrage the Muslim world, putting countless Jewish lives in grave danger.

This most unfortunate incident underscores the danger of forgetting that even though so many of our brethren now merit to live in Eretz Yisrael, we are still in galus — and must bear that in mind at all times. Deceiving an American Ambassador into posing for a picture with a doctored image of Har HaBayis and undertaking similar actions is the polar opposite to our mission.

Throughout this long and bitter exile, we have never stopped pining for the Geulah sheleimah. In every Shemoneh Esrei we plead for the return of the avodah to the Beis Hamikdash, and we hope it will take place very soon. However, the path to that glorious day is based on Torah, tefillah and acts of kindness. As we recite each Tishah B’Av in the prayer of nacheim, the third Beis Hamikdash will be built by Hakadosh Baruch Hu, and until that exalted moment, we must play our role as Jews in exile.