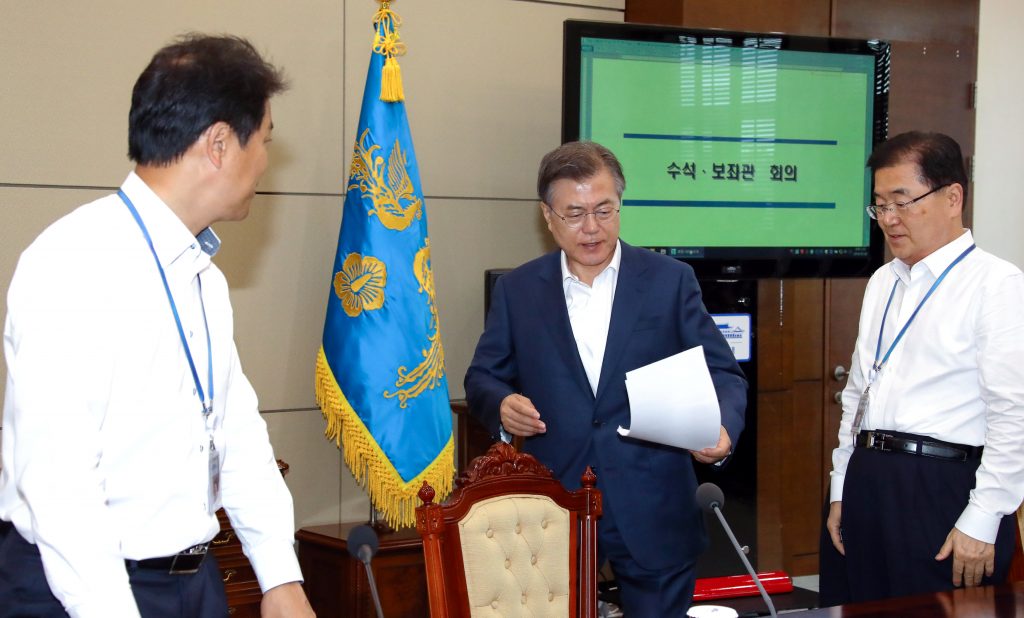 South Korean President Moon Jae-in said on Monday there could be more impromptu talks and summits with North Korea’s Kim Jong Un, as U.S. officials sought to revive what would be a historic meeting between President Donald Trump and Kim.

Moon and Kim Jong Un held a surprise meeting on Saturday at the border village of Panmunjom, during which they agreed that a North Korea-U.S. summit must be held.

“What’s more important than anything from the latest inter-Korean summit was that the leaders easily got in contact, easily made an appointment and easily met to discuss urgent matters, without complicated procedures and formalities, just like a casual meeting,” Moon told a meeting with senior secretaries.

Trump last week pulled out of the meeting with Kim, planned for June 12 in Singapore, before announcing he had reconsidered and that American and North Korean officials were meeting to work out details.

On Sunday, the U.S. State Department said U.S. and North Korean officials had met at Panmunjom, a village in the Demilitarized Zone (DMZ) that runs along the heavily armed border between North and South Korea.

A “pre-advance” team of U.S. officials has also traveled to Singapore to meet with North Koreans there, the White House said.

The White House said Trump and Japanese Prime Minister Shinzo Abe discussed North Korea by phone on Monday and confirmed they would meet before the “expected” U.S.-North Korea summit.

Trump and Abe “affirmed the shared imperative of achieving the complete and permanent dismantlement of North Korea’s nuclear, chemical, and biological weapons and ballistic missile programs,” the White House said in a statement.

While both Trump and Kim have appeared eager to hold the summit, the two sides have remained far apart on the key issue of denuclearization, with North Korea rejecting U.S. demands for it to unilaterally abandon a nuclear weapons program that now threatens the United States.

Japan’s Kyodo news agency quoted Abe as saying that the two leaders had agreed to cooperate to make the summit between the U.S. president and North Korean leader meaningful.

A U.S. official told Reuters that Sung Kim, the former U.S. ambassador to South Korea and current ambassador to the Philippines, was leading the American delegation to meet North Korean officials at the border.

Pentagon official Randall Schriver was also part of the U.S. team, along with Allison Hooker, a Korea expert on the White House National Security Council, the U.S. official said.

They met with Choe Son Hui, the North Korean vice foreign minister, who issued an angry statement last week attacking U.S. Vice President Mike Pence and saying it was up to the United States whether the two sides met in a meeting room or in “a nuclear-to-nuclear showdown.”

Trump cited that statement when announcing last week that he was pulling out of the summit.

The State Department and White House declined to give details of the latest talks.

Asian shares mostly gained on signs the United States and North Korea were still working towards holding a summit.

Analysts believe the U.S. side will be seeking to determine whether North Korea is willing to agree on sufficient steps towards denuclearization to allow a summit to take place.

“Sending such an experienced and professional team signals that the Trump administration is getting serious about the specifics of an agreement,” said Abraham Denmark, a former U.S. deputy assistant secretary of defense for East Asia.

“It’s also an implicit acknowledgment that running this negotiation out of the Oval Office has not worked, and that lower-level officials are needed to work out the details before a summit can take place.”

But with only a few weeks left until the scheduled summit, such talks appear unlikely to reconcile the differing positions over Pyongyang’s nuclear arsenal, he said.

“No matter how experienced and knowledgeable these officials are, they will not be able to change the fundamental challenge between the United States and North Korea over its status as a nuclear power.”

North Korea has faced years of economic sanctions over its nuclear and missile programs since it conducted its first nuclear test in 2006.

On Sunday, The Wall Street Journal quoted two U.S. administration officials as saying that Washington was readying a major new sanctions push against North Korea but could hold off on implementing it to avoid disrupting the delicate talks to revive the summit.

The newspaper quoted the officials as saying the Treasury Department had prepared a package aimed at nearly three dozen sanction targets, including Russian and Chinese entities, and was prepared to announce the sanctions as soon as Tuesday but could shelve the plan at any moment.

A Treasury spokesman declined to comment and the White House did not respond to a request for comment.

In remarks on Sunday, Moon acknowledged Pyongyang and Washington may have differing expectations of what denuclearization means and urged them to hold working-level talks to resolve their differences.