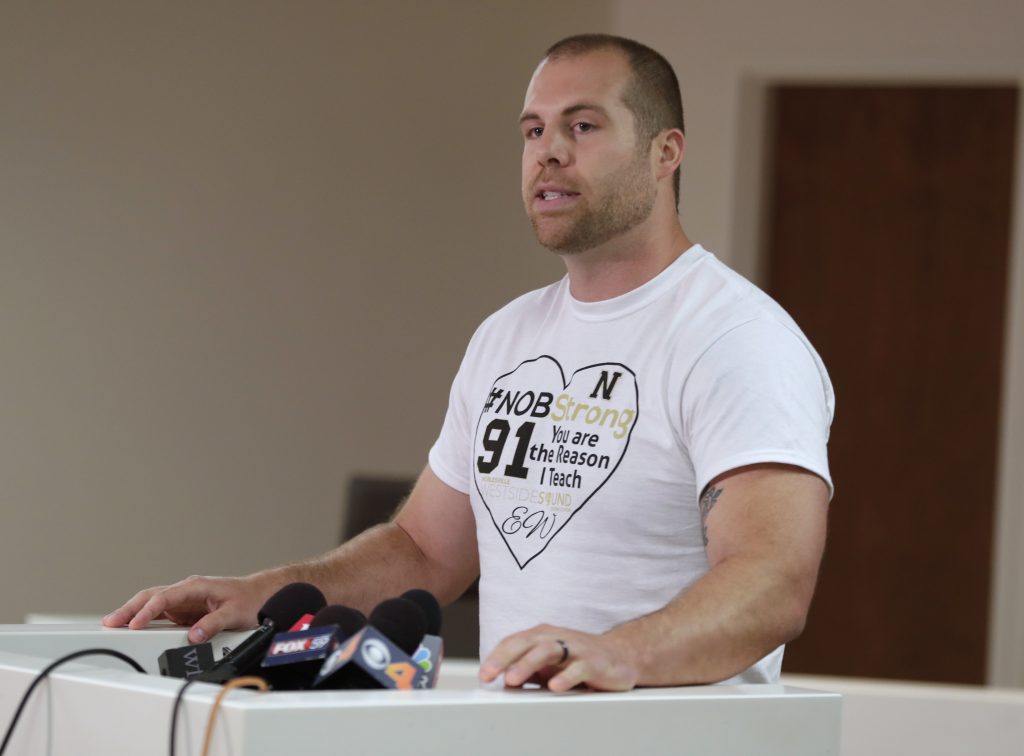 A suburban Indianapolis teacher who was shot while tackling and disarming a student inside his classroom said Monday that his swift decisions “were the only acceptable actions” to save his seventh-grade students.

Jason Seaman, speaking publicly for the first time since the shooting Friday, thanked the Noblesville community for its support and stressed that he wanted the focus to be on the other person shot during the incident: 13-year-old student Ella Whistler, who was seriously wounded.

“Her courage and strength at such a young age is nothing short of remarkable,” Seaman said during a news conference at the school district’s administrative building. “We all should continue to keep her in our minds as she continues to recover.”

School officials said Saturday that Ella was improving and making progress while recovering at an Indianapolis hospital. Her family has said she was in critical but stable condition following the shooting, though no other details about her injuries have been released.

Seaman is credited with stopping an armed student who entered his classroom at Noblesville West Middle School. Witnesses said the 29-year-old former college football player ran toward bullets as he tackled the student. Seaman was shot three times, according to his brother.

“I want to make it clear that my actions on that day, in my mind, were the only acceptable actions I could have done given the circumstances,” Seaman said Saturday. “I deeply care for my students and their well-being. That is why I did what I did that day.”

Seaman, who was released from the hospital Saturday, didn’t appear to show any pain or other sign of his injuries during the news conference. He spoke for just a few minutes and declined to answer questions from reporters.

He wore a white T-shirt emblazoned with the message: “#NOBStrong. You are the reason I teach.” His shirt also showed the wounded student’s initials, EW.

“We’re so grateful for Jason’s quick and brave actions,” Noblesville School’s Superintendent Beth Niedermeyer added during the news conference. “He put his own life in danger for his students. That alone tells you about his character and his big heart.”

“Jason Seaman is a hero, no doubt. But he is only one of the heroes I saw on this day,” Shaw said.

An online fundraiser started by a local high school student for Seaman totaled more than $72,000 by midday Monday, surpassing the original goal of $55,000. Donations ranged from $10 to more than $3,000.

“We endured a horrific and senseless tragedy,” Niedermeyer said, adding that support coming in from across the country has been a “source of strength and beauty during this ugly tragedy.”

The school district will provide counseling throughout the summer and into next school year, Niedermeyer said. The middle school was scheduled to remain closed Tuesday to provide counseling for students, staff and their families.

The Noblesville Police Department said it will have officers at every Noblesville school this week “to offer some reassurance that we are doing as much as we can to put them at ease as they finish the school year.”