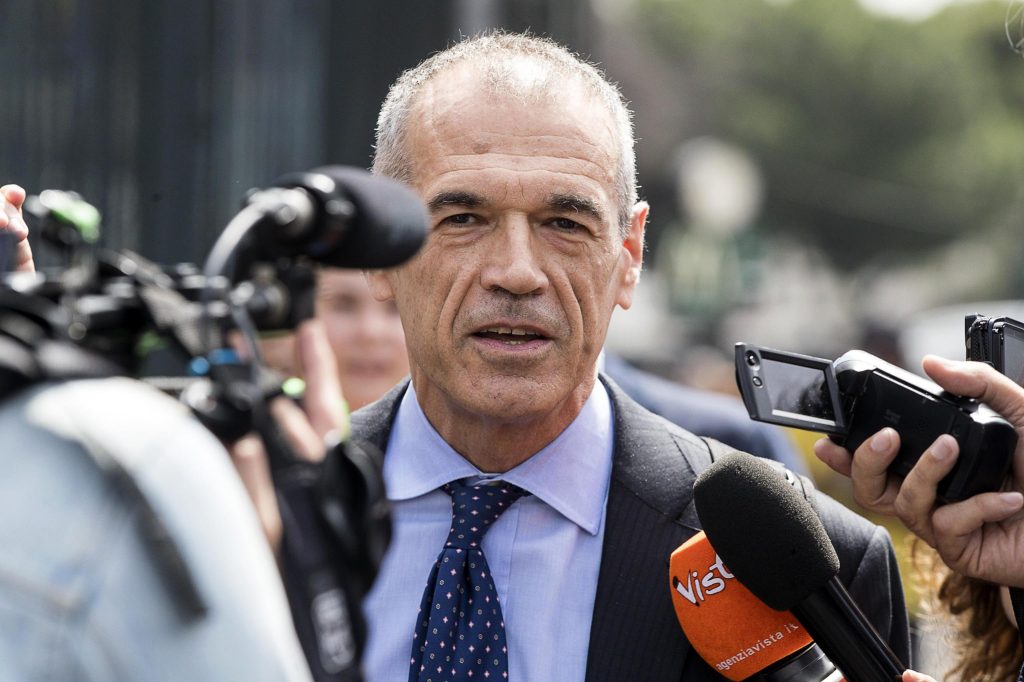 The man tapped to head a neutral government in Italy after two populists failed in their bid is a former official at the International Monetary Fund who is a firm believer in the euro and in the necessity of Italy cutting its stubbornly high-debt load.

Carlo Cottarelli, an economist, has previous government experience under the short-lived center-left government of Enrico Letta, tapped to identify areas where government spending could be trimmed. He found 32 billion euros ($37 billion) in cuts, but left embittered when the government soon changed hands at the obstacles he found within the bureaucracy resisting cuts.

On Monday, President Sergio Mattarella tapped Cottarelli to try to form a government that can bring Italy to a new election, which Cottarelli said could come as early as this autumn.

In his first remarks, Cottarelli sought to calm markets and Italy’s European partners, assuring that his government would guarantee “prudent” management of Italy’s debt, which at 132 percent of gross domestic product is Europe’s heaviest after Greece.

While vowing to press Brussels to respond to the concerns of Italians, Cottarelli said any such dialogue must be in “full recognition that as a founding country of the European Union, our role in the union is essential, as is our continued participation in the eurozone.”

Cottarelli received an undergraduate degree in economics and banking from the University of Siena and a master’s degree from the London School of Economics. He worked seven years at the Bank of Italy and then one at oil company Eni, both in research positions, before heading to the IMF, where he worked for 25 years, specializing in monetary policy, capital markets and fiscal affairs.

In his current role, Cottarelli has made frequent appearances in Italian media to evaluate the fiscal plans of the populist parties that had hoped to form a government together, the anti-establishment 5-Star Movement and the euroskeptic League. Their attempts to form a government foundered on insistence on an economics minister with anti-euro views, which Italy’s president said put Italians’ savings and investments at risk.

Cottarelli told Italy’s Radio Radicale two weeks ago that the two parties’ primary error was “making people in some way believe that without the euro, all problems would disappear. … Now they are trying to say that we are genetically incompatible with the euro.”

He rejected that argument, saying Italy isn’t structurally weaker than Germany, but that the message needed to be underlined that “if we want to share currency, we need to behave in a different way.” He noted that Italy’s inflation level is currently below Germany’s, making Italy more competitive industrially.

“To abandon the thing at this point seems to me to be a mistake,” he said.

He also has emphasized the need to bring down Italy’s enormous debt load, which costs about 60 billion euros ($70 billion) a year to service through interest payments, in order to free Italy from market forces.

Such credentials made him a natural pick for Mattarella. But the prospect of a neutral government ignited a backlash among the leaders of the two populist parties, who viewed it as yet another move by special interests to control Italy against the will of the people.