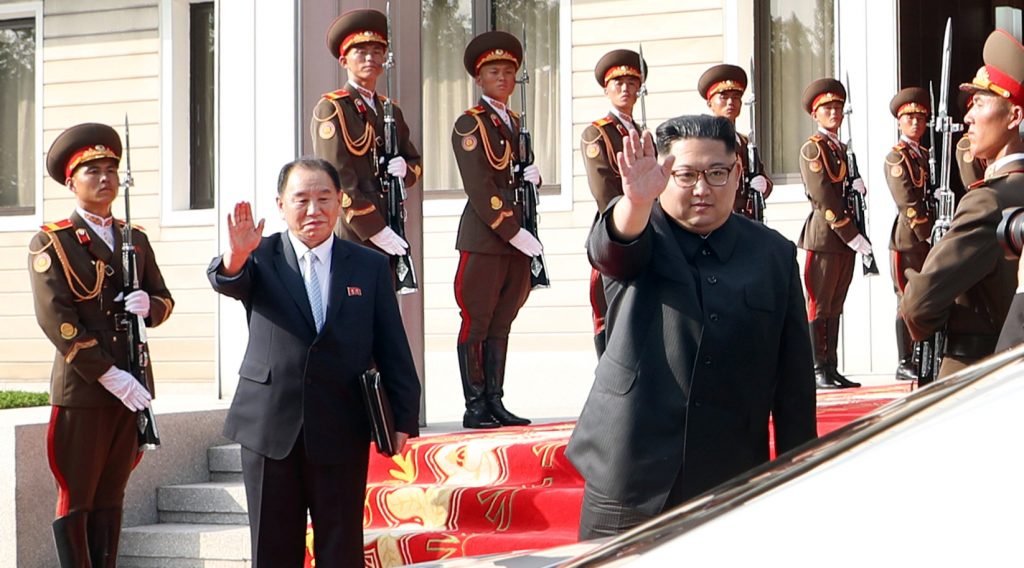 A team of U.S. officials crossed into North Korea on Sunday for talks to prepare for a summit between President Donald Trump and Kim Jong Un, as both sides press ahead with arrangements despite the question marks hanging over the meeting.

Sung Kim, a former U.S. ambassador to South Korea and former nuclear negotiator with the North, has been called in from his posting as envoy to the Philippines to lead the preparations, according to a person familiar with the arrangements.

He crossed the line that separates the two Koreas to meet with Choe Son Hui, the North Korean vice foreign minister, who said last week that Pyongyang was “reconsidering” the talks. Kim and Choe know each other well – both were part of the delegations that negotiated the 2005 denuclearization agreement through the six-party framework.

Kim is also joined by Allison Hooker, the Korea specialist on the National Security Council, and an official from the Defense Department. Randall Schriver, the assistant secretary of defense for East Asia and one of the officials who accompanied Secretary of State Mike Pompeo to Pyongyang earlier this month, also is in Seoul at the moment.

The meetings are expected to continue Monday and Tuesday.

This team is focused on the substance of any summit between the two leaders – the issue of North Korea’s nuclear weapons program.

Still, Moon, who is playing something of a mediator role in the talks, was optimistic. “We two leaders agreed the June 12 North Korea-U. S. summit must be successfully held,” he said Sunday.

The U.S. team preparing for the talks traveled Sunday to Tongilgak, or “Unification House,” the building where Kim met Moon on Saturday for impromptu talks aimed at salvaging the summit.

But after a magnanimous statement from North Korea on Friday, which said Kim still hoped to meet Trump “at any time,” the summit appears on again.

“We are having very productive talks with North Korea about reinstating the Summit which, if it does happen, will likely remain in Singapore on the same date, June 12th, and, if necessary, will be extended beyond that date,” Trump tweeted Friday night.

The White House has said that preparations will continue while the final decision on whether to proceed with the summit, scheduled to be held in Singapore, is made.

Trump confirmed Saturday that working-level meetings were continuing. “As you know there are meetings going on as we speak in a certain location which I won’t name, but you’d like the location,” he told reporters in Washington.

A separate U.S. team led by Joe Hagin, deputy chief of staff in the White House, is organizing logistics with Kim Chang Son, who is effectively the North Korean leader’s chief of staff.

Kim Chang Son was in Beijing from Thursday to Saturday, according to Japanese and South Korean media reports, although it was not clear whether his trip was related to the summit preparations.