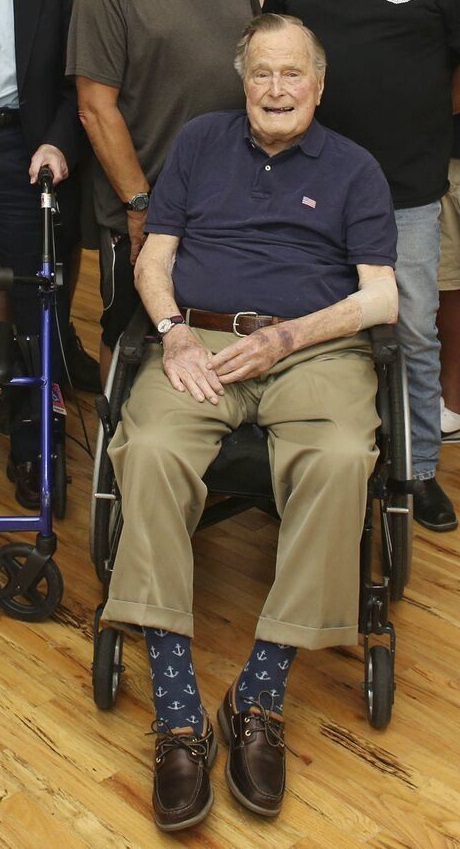 Former president George H.W. Bush has been hospitalized because of low blood pressure and fatigue, his spokesman said Sunday.

Jim McGrath announced on Twitter that Bush was taken Sunday to Southern Maine Health Care in Biddeford, Maine, and will likely remain there for a few days for observation.

“The former president is awake and alert, and not in any discomfort,” McGrath said.

Bush, who turns 94 on June 12 and is America’s longest-living president, has been hospitalized several times in recent years because of failing health. He is suffering from vascular parkinsonism, which mimics many of the symptoms of Parkinson’s disease. He and his late wife also were diagnosed with Graves’ disease, a thyroid ailment.

The former president arrived last week in Kennebunkport, Maine, where the Bush family has a summer home, according to the Associated Press. Bush attended a monthly pancake breakfast Saturday and met with veterans at the American Legion Post 159.

Bush was most recently hospitalized in Houston in April, just a day after former first lady Barbara Bush was buried. The former president had contracted an infection that spread to his blood and remained in the hospital for about two weeks. He was hospitalized twice in 2017 for pneumonia and bronchitis, and a few times between 2012 and 2015, once after falling in his Kennebunkport home and breaking a bone in his neck.

Barbara Bush died April 17 at age 92 shortly after her family said she had “decided not to seek additional medical treatment” following recent hospitalizations. At the funeral, her husband sat in his wheelchair in front of her casket and greeted mourners for 20 minutes.

The former first couple was married for 73 years.

George H.W. Bush, the father of another former president, George W. Bush, served two terms as vice president under Ronald Reagan and one term as president.