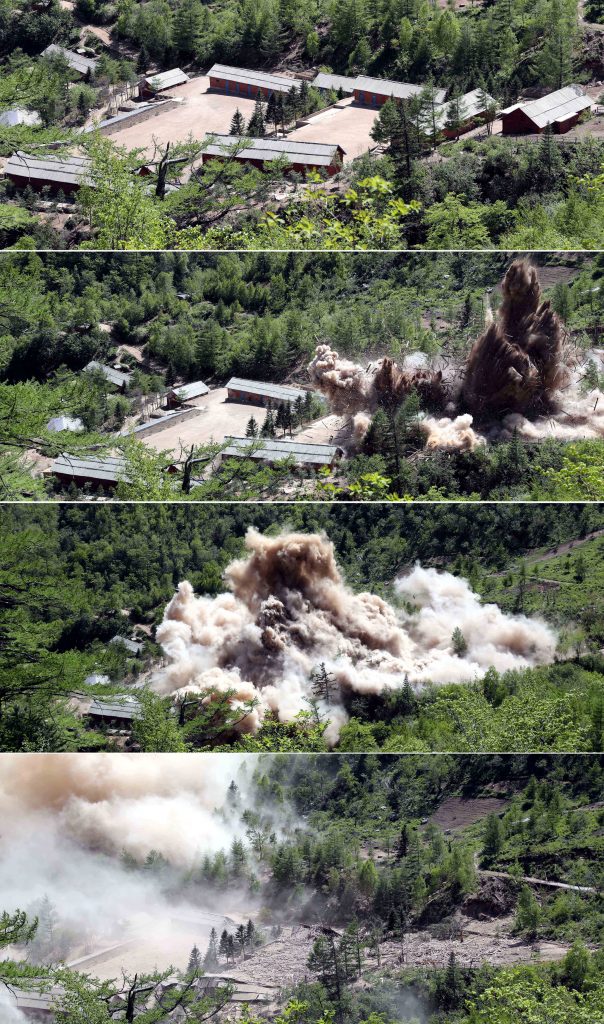 North Korea responded on Friday with measured tones to President Donald Trump’s decision to call off a historic summit with leader Kim Jong Un scheduled for next month, saying Pyongyang hoped for a “Trump formula” to resolve the standoff over its nuclear weapons program.

On Thursday, Trump wrote a letter to Kim to announce his withdrawal from what would have been the first-ever meeting between a serving U.S. president and a North Korean leader in Singapore on June 12.

Trump’s announcement came after repeated threats by North Korea to pull out of the summit over what it saw as confrontational remarks by U.S. officials.

“We have inwardly highly appreciated President Trump for having made the bold decision, which any other U.S. presidents dared not, and made efforts for such a crucial event as the summit,” Kim said in a statement carried by state media.

“We even inwardly hoped that what is called “Trump formula” would help clear both sides of their worries and comply with the requirements of our side and would be a wise way of substantial effect for settling the issue,” he said, without elaborating.

North Korea has sharply criticized suggestions by Trump’s national security adviser John Bolton and Vice President Mike Pence that it could share the fate of Libya if it did not swiftly surrender its nuclear arsenal. Libyan leader Muammar Gadhafi was deposed and murdered by NATO-backed militants after halting his nascent nuclear program.

Trump had initially sought to placate North Korea, saying that he was not pursuing the “Libya model” in getting the North to abandon its nuclear weapons program. White House Press Secretary Sarah Huckabee Sanders also said: “This is the President Trump model. He’s going to run this the way he sees fit.”

Kim Kye Gwan said North Korea’s recent criticisms of certain U.S. officials had been a reaction to unbridled American rhetoric, and that the current antagonism showed “the urgent necessity” for the summit.

“His sudden and unilateral announcement to cancel the summit is something unexpected to us and we can not but feel great regret for it,” Kim Kye Gwan said, while noting that North Korea remained open to resolving issues with Washington “regardless of ways, at any time.”

“I suspect they couldn’t agree on denuclearization,” said Masahiro Ichikawa, senior strategist at Sumitomo Mitsui Asset Management. But looking at comments from the both sides, none of them is ruling out holding a meeting in the future. So I do not expect to see an immediate escalation in military tension.”

While the Trump administration had insisted on North Korea’s complete, verifiable and irreversible dismantling of its nuclear program, Pyongyang had always couched its language in terms of denuclearization of the Korean Peninsula.

North Korea on Thursday announced it had completely dismantled its Punggye-ri nuclear test facility “to ensure the transparency of discontinuance of nuclear test.”

Footage of the event broadcast by South Korean media on Friday showed explosions throwing huge clouds of dust and debris as they destroyed tunnel entrances as well as multiple wooden structures around the site.

Other images showed North Korean officials displaying a map of the site, including several major tunnel complexes they said were unused and completely operational prior to being collapsed.

Still, some analysts are worried that the canceling of the talks could prompt a resumption in hostilities on the Korean Peninsula, including renewed shorter-range missile tests or stepped-up cyberattacks by Pyongyang and increased sanctions or deployment of new military assets by Washington.

Trump, in scrapping the June 12 summit in Singapore, sounded a bellicose note, warning Kim of the United States’ greater nuclear might, reminiscent of the president’s tweet last year asserting that he had a “much bigger” nuclear button than Kim.

Speaking later, Trump said the U.S. military stood ready if Kim were to take any “foolish” action, and that the United States would continue its “maximum pressure” campaign of sanctions to press North Korea to give up its nuclear weapons.

South Korean President Moon Jae-in, who worked hard to help set up the summit and urged Trump at a White House meeting on Tuesday not to let a rare opportunity slip away, said he was “perplexed” by the cancellation. He urged Trump and Kim to talk directly.

U.S. Secretary of State Mike Pompeo and his South Korean counterpart, Kang Kyung-wha, held a telephone consultation and agreed to continue working toward creating the right conditions for the United States and North Korea to talk, the South’s foreign ministry said in a statement on Friday.

China, North Korea’s main ally and trading partner, has publicly urged the United States and North Korea to keep up the dialogue and work to reduce tensions. However, Trump had suggested in recent days that Kim’s more defiant tone followed a meeting with Chinese President Xi Jinping.

The official China Daily said Trump’s “cheeky invitation” for Kim to call or write to set up a meeting, meant the letter did not “slam the door shut on talks” in the future.

“After 65 years some maneuvering is to be expected, but all parties need to keep in contact and work toward the same goals,” the China Daily said in an editorial.