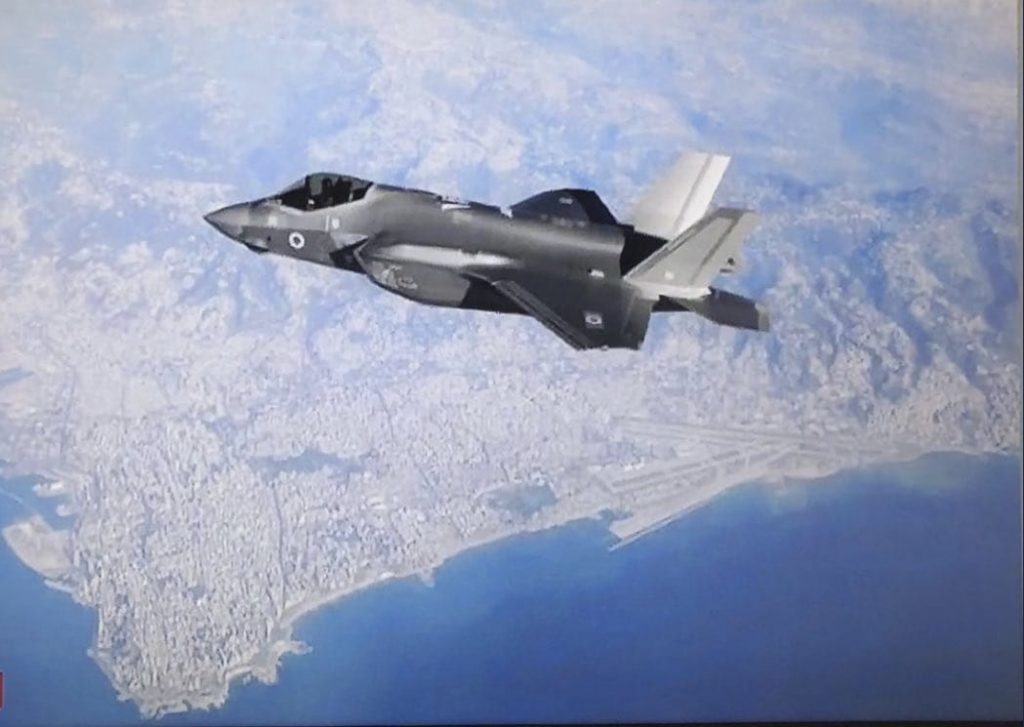 Photographic evidence of Israeli use of its new F-35 stealth fighter jet found its way into the media, as an image of the advanced craft overflying Beirut was shown on Hadashot news.

The picture, taken by a second Israeli aircraft, was initially presented by Air Force Chief Amikam Norkin at a conference for visiting commanders foreign air forces on Tuesday, and apparently leaked to the news station on Wednesday night.

Senior cabinet ministers lambasted Norkin for “arrogant” behavior in releasing the picture, Hadashot reported on Thursday, though the ministers were not named. They condemned it as “unnecessary arrogance and showing off,” and “inappropriate and unhelpful.” One minister said it was something that should not be shared even with close allies.

Defense Minister Avidgor Liberman told the meeting that the photo was publicized without his knowledge or that of IDF Chief of Staff Gadi Eisenkot.

Whether the leak was intentional or not, analysts say that it signals to Iran that Israel’s superior capabilities are now fully operational in Lebanon and Syria. Norkin also disclosed that the F-35 had participated in the recent raids on the Iranian T-4 base in Syria.

The IDF denied providing Hadashot with the image, and said the photograph was intended for viewing only by visiting defense officials at the conference. However, as the Times of Israel noted, there were over 100 attendees with some apparently holding cellphones, and at least two military photographers. As such, the denial seemed disingenuous.

The photograph showed the F-35 flying past the Lebanese coast daytime hours, with the city of Beirut and its Rafic Hariri International Airport both clearly visible. The date the picture was taken was not disclosed.

Naturally, publication of the image attracted wide professional scrutiny. Aviation expert David Cenciotti observed on Twitter that the F-35 stealth fighter was apparently not deploying its stealth features, as it seemed to be flying with radar reflectors, which make it easier to catch on radar.

Cenciotti, who runs the Aviationist blog, said the picture was not of sufficient quality to say for sure that the reflectors, small nubs, were actually used.