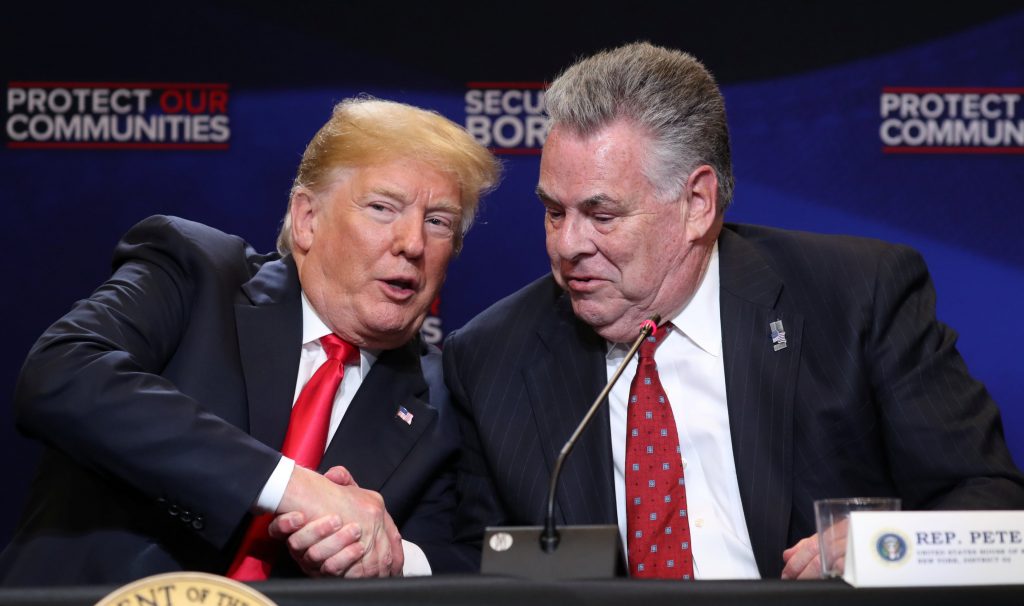 “We’re going to work out something where every time somebody comes in from a certain country, we’re going to deduct a rather large amount of money from what we give them in aid — if we give them aid at all,” Trump said during a roundtable discussion on MS-13 on New York’s Long Island attended by federal and local officials.

White House officials did not immediately respond to questions about which countries the president was referencing or how far along the plan was — but it’s not the first time he’s made the suggestion.

During the roundtable, Trump and officials who support more stringent borders laws defended his references to MS-13 gang members as “animals” as they recounted a litany of hackings, decapitations, bludgeonings and other gruesome crimes that law enforcement authorities blame on the group.

“I called them animals the other day and I was met with rebuke,” Trump said, referencing Democratic criticism. He specifically mentioned House Democratic leader Nancy Pelosi as saying even gang members are people.

“They’re not people,” Trump said. “These are animals and we have to be very, very tough.”

Pelosi had commented more broadly on Trump’s rhetoric and policies directed at immigrants, including changes the administration wants that could lead to more children being separated from their parents as they cross the border illegally.

“It’s harder and harder for the Democrats,” Trump said, suggesting the party would suffer politically for its harsh reaction to his “animals” remark.

“The other day was actually a great day when they were coming to the defense of MS-13,” he said.

During a similar roundtable last week at the White House, Trump used the word “animals” to describe some people who enter the country illegally, in response to a comment about MS-13. He later said he will continue to use the term when referring to the gang.

Trump’s comments, reported by some news organizations without context, sparked a furious blowback that the White House quickly seized on and used to suggest Democrats were defending members of a gang known for brutal violence.

Harking back to times past, Trump said that when he was growing up nearby, people could leave their doors unlocked and windows open.

“You have gang members now that are so tough people are afraid to go outside,” he said.

Trump lamented the restrictions put on officers in their treatment of suspects.

“The restrictions that are put on them are incredible. You’ve got to be nice, you can’t be too tough, you have to be gentle. They can’t touch, they can’t do anything. And they do an incredible job,” he said.

MS-13, or the Mara Salvatrucha, is believed by federal prosecutors to have thousands of members across the U.S., primarily emigrants from Central America. It has a stronghold in Los Angeles, where it emerged in the 1980s as a neighborhood street gang, but it also has wreaked violence in cities and suburbs across the U.S., including Long Island.

Trump opened Wednesday’s event by reading a list of crimes said to have been committed by MS-13 members, including the killing and hacking of a teenager in Nassau County, New York, and the stabbing of a man 100 times, followed by his decapitation and removal of his heart, in Maryland.

He has also threatened to cut off aid to the countries, which include China and Sierra Leone, as well as countries that produce illegal substances, saying that they’re “not our friends.”

Sitting at the table with Trump was Deputy Attorney General Rod Rosenstein, a frequent target of the president’s fury because he is overseeing the special counsel’s investigation into Russian election meddling. He and Trump appeared on good terms Wednesday, with no hints of any tension between them.