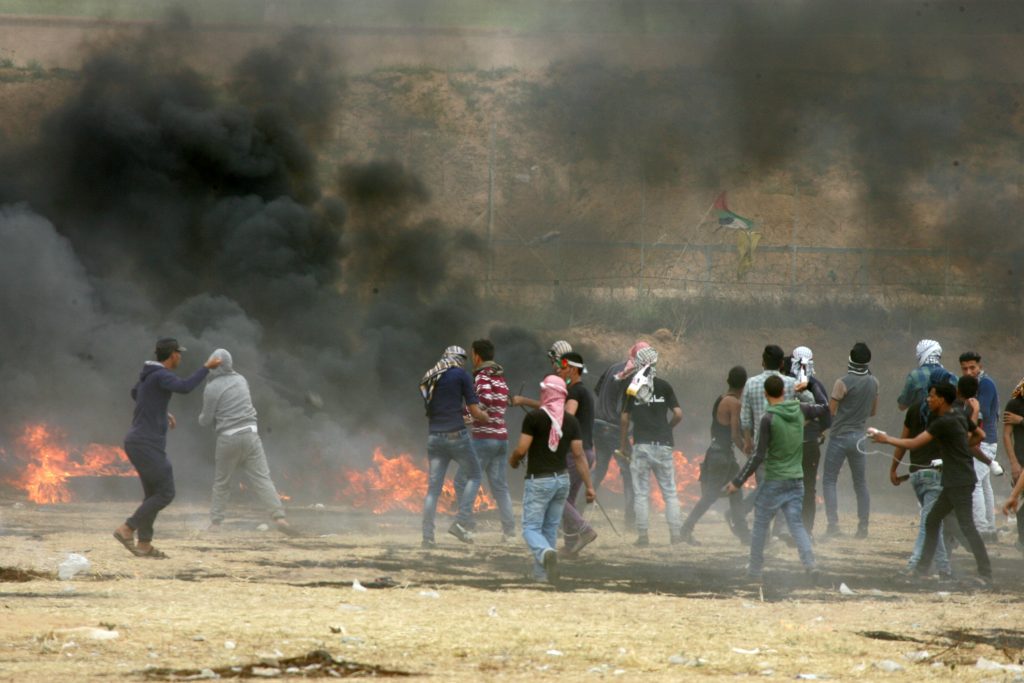 Each year, they make sure to mark the day as one of rage. “The Day of Rage,” or the Nakba, as they say, is marked each year on May 15, on the same day that heralded the end of the British Mandate seventy years ago, and on the day that the State of Israel was declared.
This year, in an exceptional move, the day was moved ahead by one. The masses, thousands of enraged Palestinians, swarmed out to the security fence on May 14, and began clashing with security forces.

The early date was no coincidence. At the same moment that thousands of Palestinians converged on the fence, the American embassy in Yerushalayim was being inaugurated; and these riots were a signal to the United States and its leader, President Donald Trump, that they are most displeased by his deep friendship with Israel.
This time, in contrast to Israel’s renowned restraint (as then-Prime Minister Ariel Sharon said, “restraint is power”), Israel did not restrain itself and did not remain silent. Israel returned fire; and 61 Palestinians were shot to death on the Day of Rage. The next day, the original Nakba Day, the Palestinians neither bothered nor dared go out to the border; they were busy mourning and burying their dead.

What happened to Israel? When and how did its policy change? Many have been wondering the same thing. The Israeli Left was stunned and alarmed: How did it suddenly happen that a little riot on the border had exacted so many casualties?!

If we look at the overall picture, it is clear that moving the embassy at those very moments symbolizes part of the process that Israel is going through at this time.

It turns out that Pres. Trump has his own language, and there are those who understand only that. Some people only understand “diplomatese,” and others don’t play the game of being politically correct. When it comes to Iran and North Korea, for example, as long as the countries of the world speak to them nicely and sign them onto nuclear agreements of one kind or another, they continue to do as they please and enrich uranium. Signatures and tailored suits belong to the Western world, not to them.

Pres. Trump came to the White House and changed the language. No more being politically correct, no more flattery and partiality, no more smiles that have nothing behind them. Everything is on the table, now and immediately. Whatever Pres. Trump thinks, he immediately conveys to the world via social media, even before the White House staff arises to a new day.

You’re short and fat, Pres. Trump said to Kim Jong Un; and the world bit its nails. Starting up with the North Korean dictator did not seem to be the wisest move, but in response, the dictator chose to sit with Pres. Trump at the table to discuss nuclear issues face-to-face. Apparently this is the language that the North Koreans understand. The language of power.

Pres. Trump’s method is, in essence, saying that everything that was until now is no longer. It’s like that old man who met a young man in the forest and said to him: “I can’t tell you the way out of here, but I can tell you where not to go.” The path of super-diplomacy practiced by previous United States presidents is a path that has already led to failure. Let’s try a new way.

That is also the language that the Palestinians understand. Our close proximity with the Palestinians has given rise to this story: There was a youth who got his salary check. He came to the bank to redeem it, and the clerk told him he had to sign on the back of the check. “No,” he said. “I’ll sign on the front, next to where my boss signed.”

“If you sign on the front I won’t be able to redeem the check,” the clerk explained; and a whole ruckus ensued. When he heard the commotion, the bank manager emerged. When he heard what the youth wanted, he delivered a stinging slap on his face.

The clerk asked him, “Why didn’t you sign when I told you the same thing?”

The youth replied, “You told me; he explained it to me.”

In the last week, Israel stopped saying things. It just explained things to the Palestinians. You want to rage? We know how to rage as well.