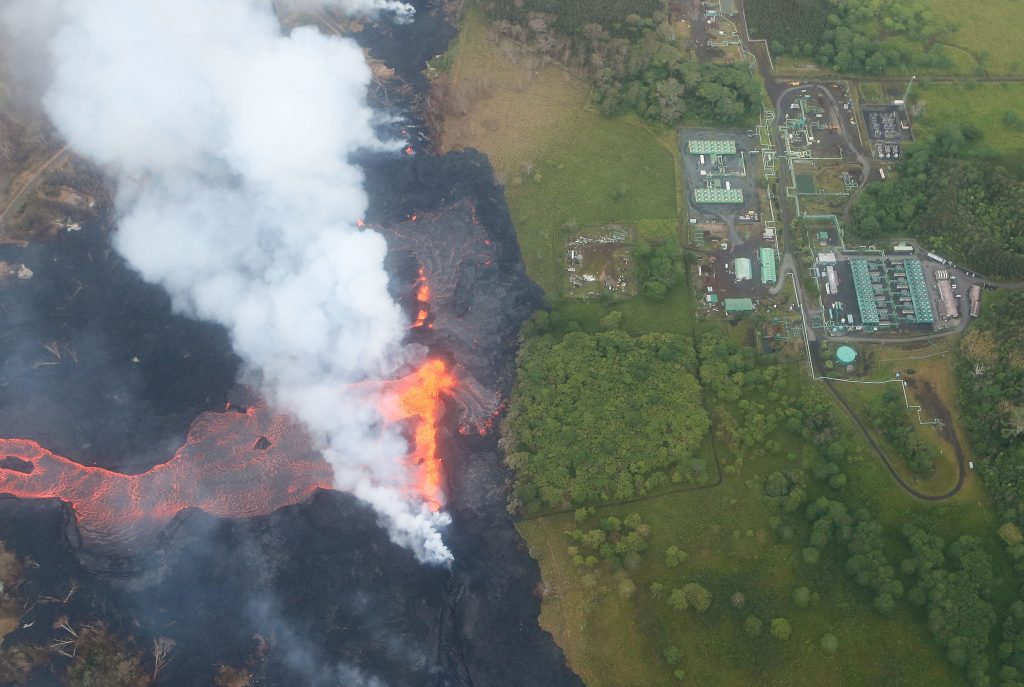 Molten lava from the erupting Kilauea Volcano on Hawaii’s Big Island crept onto a geothermal power plant site on Monday, as workers rushed to shut down the facility to prevent the uncontrollable release of toxic gases.

Crews worked into the night to cap the 11th and final well at the Puna Geothermal Venture (PGV) plant, which provides about 25 percent of the Big Island’s power, as lava from an active fissure flowed 200 to 300 yards from the nearest well pad, county and federal officials said.

“County, state, and federal partners have been collaborating closely to monitor the situation and work with PGV to ensure the safety of the surrounding communities,” the county said.

The race at the site marked the latest challenge facing authorities as they cope with what geologists rank as one of the biggest upheavals in a century from one of the world’s most active volcanoes.

The plant has been closed since shortly after lava began erupting on May 3 through newly opened fissures in the ground running through neighborhoods and roads on the far eastern flank of Kilauea.

Within a week, some 60,000 gallons of the highly flammable chemical pentane, which was stored at the plant, were moved from harm’s way. The state said last week it was pumping cold water into the wells and would cap them with iron plugs.

The plant’s wells run 6,000 to 8,000 feet underground to tap into extremely hot water and steam used to run turbines and produce electricity.

About three miles to the east of the plant on the coast, noxious clouds of acid fumes, steam and fine glass-like particles billowed into the sky as lava poured into the ocean from two flows cutting across Highway 137, one of the main exit routes from the eruption zone.

Laze – a term combining the words “lava” and “haze” – is formed when erupting lava, which can reach 2,000 degrees Fahrenheit, reacts with sea water. It is potentially deadly if inhaled.

“If one were to be near the laze, because of the various acids, it would be corrosive to the eyes, the nose and respiratory tract, and the skin,” Dr. Alvin Bronstein from the Hawaii State Department of Health told journalists on a conference call.

Laze killed two people when a lava flow reached the coast in 2000, and authorities warned residents to stay clear of it.

Another hazard was the potential for methane gas explosions as searing lava neared pockets of rotting vegetation, igniting traces of the flammable gas given off by the decay.

“These are quite a big hazard in vegetative areas and the explosions can occur well away from the lava flow itself,” USGS geologist Janet Babb said on the call.

Geologists say Kilauea’s eruption, which has already produced around two dozen lava-spewing fissures, has now entered a more violent phase, in which larger volumes of molten rock are oozing from the ground and traveling farther than before.

At least 44 homes and other structures have been destroyed in the Leilani Estates and Lanipuna Gardens area of the Puna district, and a man was seriously injured on Saturday when a plate-sized chunk of molten lava shot out of a fissure and struck him on the leg.

Two thousand people have been ordered from their homes due to lava flows and toxic sulfur dioxide gas, levels of which have tripled in the last two days, according to civil defense officials. The Hawaii National Guard has warned of more mandatory evacuations if further highways are blocked.