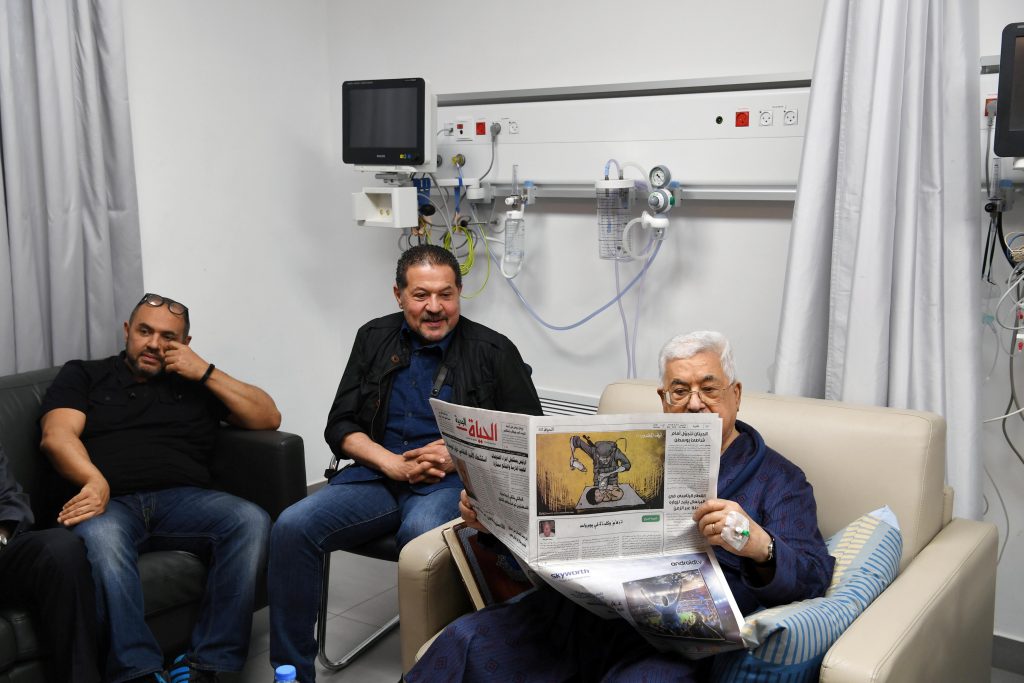 Palestinian leader Mahmoud Abbas is suffering from a lung infection and could remain in hospital for several days, Palestinian medics and officials said on Monday.

Abbas, 82, was admitted to hospital for the third time in less than a week on Sunday in Ramallah.

Doctors initially said that the leader had entered the hospital for medical tests after ear surgery five days earlier. But on Monday night they said he had a lung infection.

“He is now responding to the treatment quickly and is recovering,” the doctor said.

The veteran leader allowed himself to be filmed by Palestine media on Monday night, after nearly 36 hours in the hospital.

Abbas did not speak in the brief filmed clip that was broadcast Monday night, and his appearance after two days of rumors appeared to be an attempt to address questions about his health and the future of the Palestinian leadership.

Images released by Abbas’ office showed him sitting in bed reading a newspaper and walking unassisted through the corridor of the hospital in a blue dressing gown flanked by a doctor, family and aides.

After two days of sparse updates from medical officials, a series of long-time associates and colleagues visited Abbas on Monday, emerging to give uniformly upbeat assessments of his condition.

“I visited President Abbas in hospital tonight. He suffers from pneumonia and is treated with antibiotics,” MK Ahmed Tibi said on Twitter.

He said Abbas’ condition was “markedly improved” and that they had discussed political issues, but that he would “spend several more days in the hospital.”

Jibril Rajoub, a senior official in Abbas’ Fatah party, told Palestinian media: “There is a consensus among doctors that the president is out of the danger area and he is well, but he will stay a few more days [in hospital] upon doctors advice.” He said that Abbas had breakfasted with his sons Yasser and Tareq, had “responded well” and was now recovering.

A heavy smoker, Abbas was hospitalized in the United States for medical checks in February during a trip to address the U.N. Security Council.

Abbas underwent minor ear surgery last Tuesday but went back into al-Istishari Hospital in Ramallah briefly overnight on Saturday/Sunday. He was then rushed back later that day, for what doctors described only as “medical tests.”

Abbas’s democratic mandate expired eight years ago – there has been no presidential election since 2005 and the term of office is only five years. His authority is essentially limited to Yehudah and Shomron, with the Islamist terror group Hamas in control of the Gaza Strip.

Abbas has no formal deputy in the Palestinian Authority. In theory, the speaker of parliament would take over as president on an interim basis were Abbas to die in office. But the parliamentary speaker’s role is held by a Hamas representative, and Fatah is likely to dispute the constitutional legitimacy of him taking over.

In 2016 Abbas established the Palestinian Constitutional Court, whose head could take charge until an election is held.

Abbas is also chairman of the executive committee of the PLO, a position to which he was re-elected unopposed on May 4.