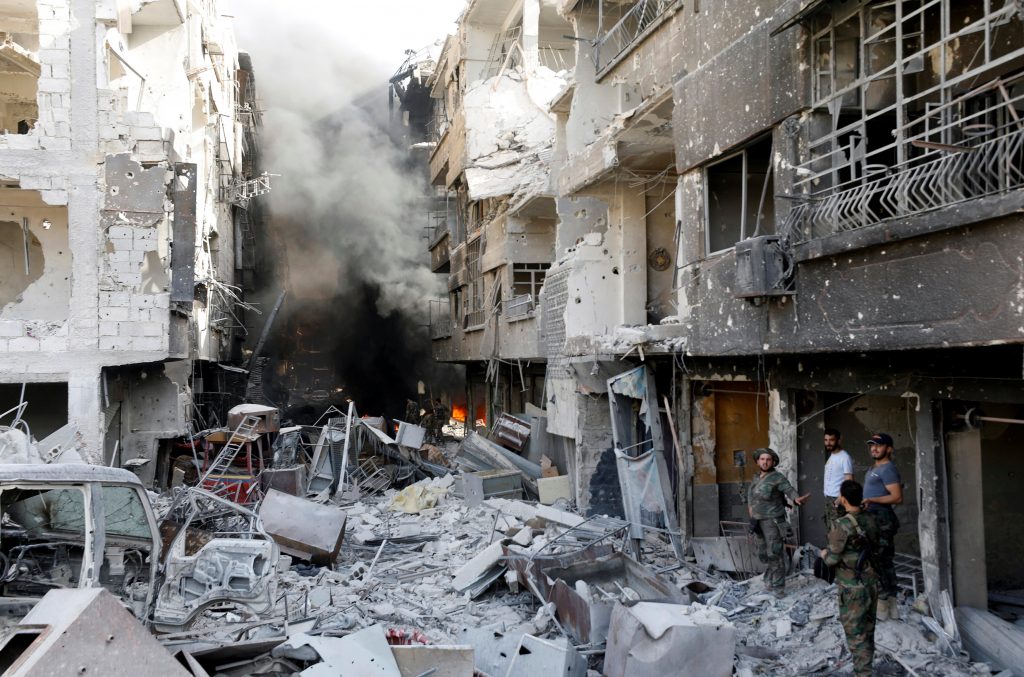 Blasts set off by an explosion at a weapons warehouse in central Syria killed 11 people and wounded dozens last Friday, a war monitor said.

The Syrian Observatory for Human Rights said the deaths at the Hama air base included Syrian government troops and allied militiamen, adding it was not clear what triggered the explosions.

Syrian state media also reported the blasts, which sent off a large plume of smoke into the sky, but did not give a reason or mention casualties.

A rebel commander in the area said the armed opposition did not target the air base and is not responsible for the explosion. There were also no reports of jets in the skies at the time of the explosions.

Also last Friday, a Kremlin official reiterated Russian President Vladimir Putin’s statement a day earlier from his meeting with Syrian President Bashar Assad about the need for foreign troops to pull out from Syria, referring to Iran and Hezbollah.

Israel views the Iranian expansion along its doorstep as a threat, and has launched blistering bombardments of Iranian positions in Syria recently, killing Iranian terrorists after an Iranian rocket barrage toward its positions on the Golan Heights.

In late April, a missile attack on government outposts in Hama and Aleppo provinces in northern Syria killed more than a dozen pro-government fighters, many of them Iranians.

The French Finance and Foreign ministries announced a freeze on assets of three individuals and nine companies involved in research or purchasing for the Syrian Scientific Research Center. The Syrian lab is accused of producing chemical weapons for Assad’s government.

In the latest report of poison gas being unleashed, the international chemical weapons watchdog said Wednesday that chlorine was likely used as a weapon in the rebel-held northern Syrian town of Saraqeb in early February. The Organization for the Prohibition of Chemical Weapons released details of a report into the chlorine use, but did not say which side in the fighting used it.