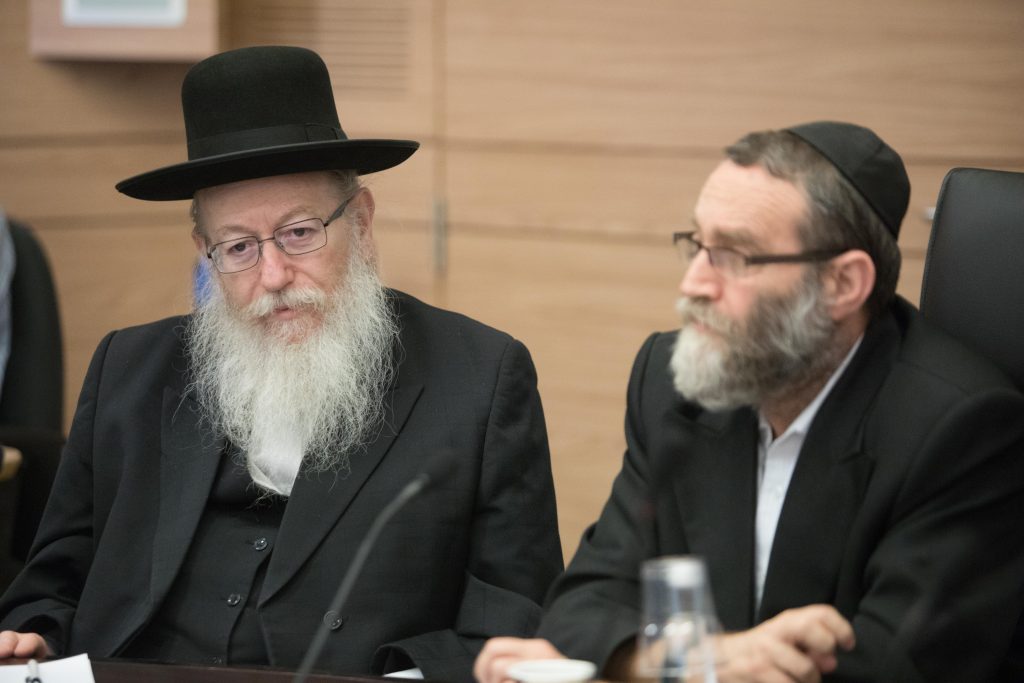 The heads of the United Torah Judaism party, Deputy Health Minister Rabbi Yaakov Litzman and Finance Committee Chairman Rabbi Moshe Gafni, sent a letter to Prime Minister Binyamin Netanyahu on Wednesday, in which they demand that the government speed up the process of inking the delayed draft law into law.

They begin the letter with thanking the prime minister for his work on behalf of the state, and wish him continued success in all his endeavors.

In their letter, Rabbis Litzman and Gafni then move to the important issue of the draft law: “Despite your many responsibilities, we seek to draw your attention to the important and fundamental thing that is most precious to us,” they write.

“We are now completing three years from the time this government – headed by you – was established. In the coalition negotiations between UTJ and the Likud, ahead of the forming of the government, the main issue without which we were not be part of this coalition, is the regulation of the yeshivah students’ status vis-a-vis the IDF enlistment authorities, and indeed the coalition agreement was signed between the two parties in the spirit of the statement that you wrote to us: That the new government being formed will be based on the understanding that in a Jewish state, there shall not be any limit or quota for Torah students.

“This demand in our coalition agreement came to erase the amendment that was made to the draft law in the previous government, and indeed the coalition amended the law two years ago, and again left the authority to the defense minister to postpone military enlistment to yeshivah students.

“Unfortunately, the High Court rejected the amendment that the current coalition made two years ago, and canceled the arrangement as it has stood since the period of the first government headed by Ben-Gurion, through all the governments to this very day, which enables those who study Torah to be deferred from military service.

“The High Court gave an extension of one year – which ends in September 2018 – and during the winter session, the issue was discussed among the coalition parties, and towards the end of the session a preliminary reading passed in the Knesset, which upholds the arrangement of deferral of military service to yeshivah students. At the end of the winter session, it was agreed that within 30 days of the beginning of the summer session, the legislative process would continue with the aim of reaching a final and permanent legislation, including all the readings in the Knesset confirming the above arrangement. It should be noted that the 30-day period that was agreed upon is about to end in the coming days.

“As emissaries of our Rabbanim and Gedolim, shlita, we were instructed to ask that legislation should be expedited immediately so that it will be passed in the current Knesset session. Needless to say, as stated earlier, had it not been for the clause in the coalition agreement on the status of yeshivah students, we would not have been part of the coalition – and so is their directive, for the future partnership in the coalition.

“We are hopeful that what was promised on this issue will be upheld, and we look forward to your response,” Rabbi Litzman and Rabbi Gafni conclude their letter.