National Trump: If FBI Spied on My Campaign, ‘Bigger Than Watergate!’
National 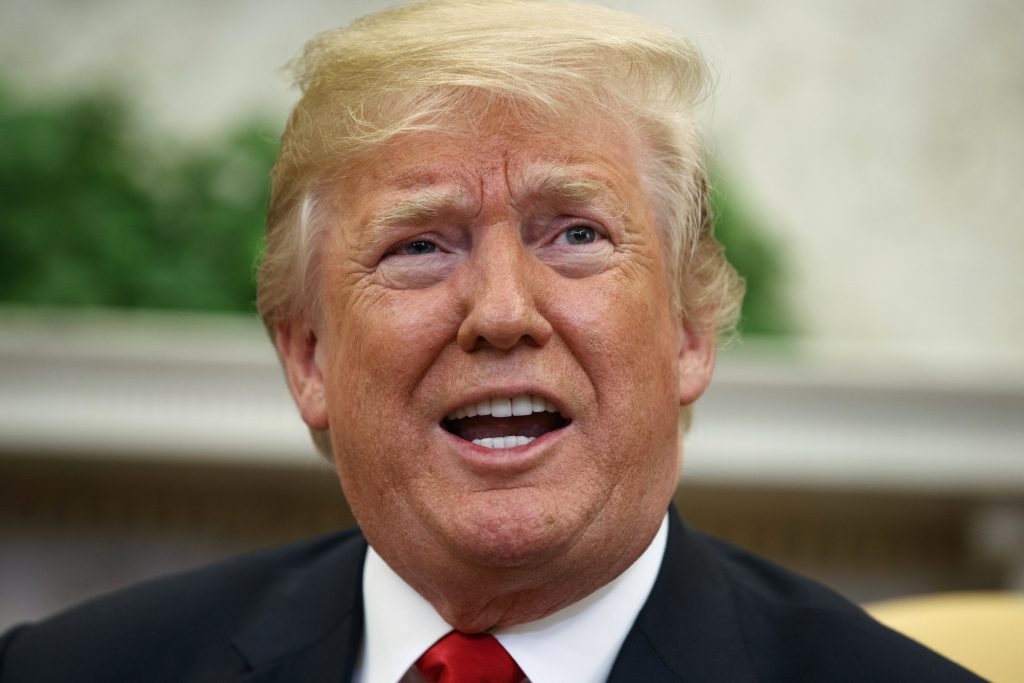 President Donald Trump lent credence Thursday to reports that FBI informants had infiltrated his presidential campaign, saying that “if so, this is bigger than Watergate!”

Trump made the comment on the anniversary of Robert Mueller’s appointment as special counsel to head the Justice Department investigation into possible coordination between Russia and Trump campaign official. Trump has repeatedly called the investigation a “witch hunt.”

“Wow, word seems to be coming out that the Obama FBI ‘SPIED ON THE TRUMP CAMPAIGN WITH AN EMBEDDED INFORMANT,'” Trump tweeted. “Andrew McCarthy says, ‘There’s probably no doubt that they had at least one confidential informant in the campaign.’ If so, this is bigger than Watergate!”

McCarthy, a contributing editor at the National Review, wrote an article published last week headlined “Did the FBI Have a Spy in the Trump Campaign?”

The New York Times reported separately this week that at least one government informant met several times with Carter Page and George Papadopoulos, both former foreign policy advisers on Trump’s Republican campaign. The newspaper attributed the information to current and former FBI officials.

White House spokeswoman Sarah Huckabee Sanders said if the reports are proved true, “it should certainly be looked into.”

The Watergate scandal in the early 1970s occurred following a break-in by five men at Democratic Party headquarters at the Watergate building in Washington, and subsequent attempts by the administration of President Richard Nixon to hide its involvement. Nixon, a Republican, ultimately resigned from office as a result of the ensuing investigation.

Speaking Thursday on Fox, the former New York mayor said Trump will only sit down with Mueller if “we feel there’s a way to shorten this thing.” He added that Trump remains eager to offer his “side of the case.”

Giuliani has been urging Mueller’s team to wrap up the investigation, now that the probe has reached the one-year mark.

Giuliani’s team has been weighing whether to allow Trump to sit for an interview with Mueller. He said the legal team is “pretty comfortable, in the circumstances of this case, that they wouldn’t be able to subpoena him personally.”

While the Supreme Court has never definitively ruled on the subject, it appears that a sitting president could be forced to testify. In 1974, justices held unanimously that a president could be compelled to comply with a subpoena for tapes and documents.

If Trump were subpoenaed and did not want to testify, he could always invoke his constitutional right not to testify against himself and decline to answer questions. But that act would pose significant political risk.

Giuliani also repeated that Mueller’s team has indicated it would not attempt to indict Trump, as he told The Associated Press on Friday. Justice Department legal opinions from 1973 and 2000 have suggested that a sitting president is immune from indictment, and that criminal charges would undermine the commander in chief’s ability to do the job.

Giuliani told Fox News Channel’s Laura Ingraham on Wednesday that Mueller “has all the facts to make a decision,” after 12 months investigating Russian meddling in the election and possible collusion with Trump’s campaign.

“Mueller should now bring this to a close,” said Giuliani. “It’s been a year. He’s gotten 1.4 million documents, he’s interviewed 28 witnesses. And he has nothing, which is why he wants to bring the president into an interview.”

“It’s about time to say enough. We’ve tortured this president enough,” he added, describing the investigation as being “like a big weight” on the president’s back.

Trump, however, has panned it as a “witch hunt” intended to discredit his presidency, and has insisted that Russia had nothing to do with his winning campaign.

Giuliani, who is working for the president pro bono, said Wednesday that the probe “is not good for the American people, and the special counsel’s office doesn’t seem to have that sort of understanding that they’re interfering with things that are much bigger than them.”