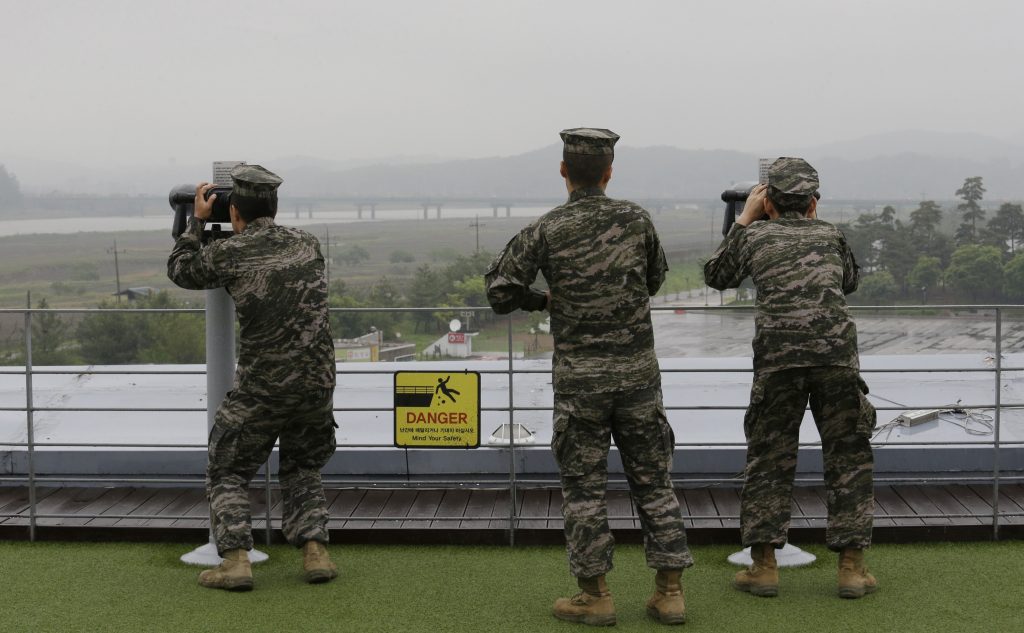 South Korea said Thursday it’s pushing to reset high-level talks with North Korea and will communicate closely with Washington and Pyongyang to increase the chances of a successful summit between President Donald Trump and North Korean leader Kim Jong Un on resolving the standoff over the North’s nuclear weapons.

The announcement by Seoul’s presidential National Security Council came a day after North Korea threatened to scrap next month’s historic meeting between Trump and Kim, saying it has no interest in a “one-sided” affair meant to pressure the North to abandon its nukes. The North also broke off a high-level meeting with South Korea to protest the U.S.-South Korean military exercises the North has long claimed are an invasion rehearsal.

The North’s surprise announcement seemed to cool what had been an unusual flurry of outreach from a country that last year conducted a provocative series of weapons tests that had many fearing the region was on the edge of war. Analysts said it’s unlikely that North Korea intends to scuttle all diplomacy. More likely, they said, is that it wants to gain leverage ahead of the talks between Kim and Trump, scheduled for June 12 in Singapore.

South Korea, which brokered the talks between Kim and Trump, will “closely mediate using multiple communication channels with the United States and with North Korea so that the North Korea-U.S. summit can proceed successfully,” said the NSC after a meeting chaired by Chung Eui-yong, the top security adviser of South Korean President Moon Jae-in.

The NSC also urged the North to faithfully abide by the agreements reached between Moon and Kim in their summit last month, where they issued a vague vow on the “complete denuclearization” of their peninsula and pledged permanent peace. Senior officials from the two Koreas were to sit down at a border village on Wednesday to discuss how to implement their leaders’ agreements to reduce military tensions along their heavily fortified border and improve overall ties before the North canceled the meeting.

In Washington, Trump said the U.S. hasn’t been notified about the North Korean threat to cancel the summit.

White House spokeswoman Sarah Huckabee Sanders said the administration is “still hopeful” that the summit will take place, and that threats from North Korea to scrap the meeting were “something that we fully expected.”

She said Trump is “ready for very tough negotiations,” adding that “if they want to meet, we’ll be ready and if they don’t that’s okay.” She said if there is no meeting, the U.S. would “continue with the campaign of maximum pressure” against the North.

North Korean first vice foreign minister Kim Kye Gwan said in a statement carried by state media that “we are no longer interested in a negotiation that will be all about driving us into a corner and making a one-sided demand for us to give up our nukes, and this would force us to reconsider whether we would accept the North Korea-U.S. summit meeting.”

He criticized recent comments by Trump’s top security adviser, John Bolton, and other U.S. officials who have said the North should follow the “Libyan model” of nuclear disarmament and provide a “complete, verifiable and irreversible dismantlement.” He also took issue with U.S. views that the North should fully relinquish its biological and chemical weapons.

Some analysts say bringing up Libya, which dismantled its rudimentary nuclear program in the 2000s in exchange for sanctions relief, jeopardizes progress in negotiations with the North. Kim Jong Un took power weeks after former Libyan leader Moammar Gadhafi’s gruesome death at the hands of rebel forces amid a popular uprising in October 2011. The North has frequently used Gadhafi’s death to justify its own nuclear development in the face of perceived U.S. threats.

Annual military drills between Washington and Seoul have long been a major source of contention between the Koreas, and analysts have wondered whether their continuation would hurt the detente that, since an outreach by Kim in January, has replaced the insults and threats of war. Much larger springtime drills took place last month without the North’s typically fiery condemnation or accompanying weapons tests, though Washington and Seoul toned down those exercises.

The North’s official Korean Central News Agency said the U.S. aircraft mobilized for the drills include nuclear-capable B-52 bombers and stealth F-22 fighter jets, two of the U.S. military assets it has previously said are aimed at launching nuclear strikes on the North. The allies say the drills are defensive in nature.

Seoul’s Defense Ministry said F-22s are involved in the drills, but not the B-52s. Ministry spokesman Lee Jin-woo said the B-52s had never been part of plans for this year’s drills that are focused on pilot training, denying media speculation that Washington and Seoul withdrew the bombers in reaction to Pyongyang’s announcement.

Kim told visiting South Korean officials in March that he “understands” the drills would take place and expressed hope that they’ll be modified once the situation on the peninsula stabilizes, according to the South Korean government.

Despite Kim’s outreach, some experts were skeptical about whether he would completely give up a nuclear program that he had pushed so hard to build. The North previously vowed to continue nuclear development unless the United States pulls its 28,500 troops out of South Korea and withdraws its so-called “nuclear umbrella” security guarantee to South Korea and Japan as a condition for its nuclear disarmament.

Wednesday’s threat could also be targeted at showing a domestic audience that Kim is willing to stand up to Washington. Kim has repeatedly told his people that his nukes are a “powerful treasured sword” that can smash U.S. hostility.