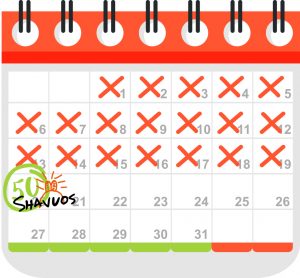 More than two thousand years have passed since this incident presumably took place. Since it does not appear to have been documented, and there are no surviving eyewitnesses — we will rely partially on our imaginations for the precise details.

While the Torah gives us a list of specific actions which were prohibited on Shabbos, riding a horse wasn’t one of them. For generations, many Jews throughout Eretz Yisrael likely spent their Shabbos afternoons traveling by horse to visit their relatives at the other end of their village. Then, one day, they received the stunning news that the Rabbanim of their generation had enacted a decree: Riding a horse was now forbidden! Eventually, they learned the reason: It was out of concern that one would cut off a branch of a tree to use as a whip.

Let us imagine the subsequent scene: An indignant wagon driver stands in the midst of a circle of his fellow tradesmen venting — as the others nod their head in agreement.

“Can you imagine such a thing!” he declares. “I have ridden horses for more than 40 years. My father was a wagon driver, as were my grandfather and great-grandfather. In all these years, we never tore off a branch of a tree to use for a whip! The Chachamim don’t know what is really going on …”

“This is totally impractical,” chimes in one of his cohorts. “Nowadays it is simply impossible to get around without a horse… The Chachamim aren’t acquainted with the ‘real’ world… They really should stick to learning Torah and leave horseback riding and wagon driving to us experts!”

When I repeated this anecdote to my family — which I recently heard from Harav Berel Tauber at an asifas chizuk about technology — my son repeated to me a similar scene he heard about in a shiur:

For generations, Jews were well aware of the Torah prohibition of eating meat from an animal in the same meal as a milk product. Mixing milk and poultry was permissible, until the Chachamim enacted a decree against it.

“How can anyone mix up a chicken with a cow?” a frustrated farmer, long accustomed to putting milk into his chicken soup, wanted to know when he heard about the new prohibition. “A chicken is a fraction of the size of a cow, and even after they are slaughtered, they taste so different… What do Chachamim know about animals?”

Throughout our history, there have always been those who sought to cast doubt on the rulings and enactments of the spiritual leaders of their generation. With the passage of time, all observant Jews accepted these rulings, recognizing that the Rabbanim of the previous generations were far greater than they, and whatever the Rabbanim enacted became an integral part of the Torah.

Yet it was the rulings of the Gedolim of their own generation that they struggled to accept — as they failed to realize that the spiritual leaders of each generation are blessed with the siyatta diShmaya and the wisdom to enact whatever takanos are called for under the specific circumstances.

The nisayon of our generation isn’t to ride a horse on Shabbos, or to wait six hours between chicken and milk. Our challenge is to accept the takanos and decisions of the Gedolim of our era. Those who argue that the Rabbanim “aren’t aware of what is going on,” or the “Gedolim are being misled by inaccurate information,” don’t realize that they are repeating the same foolish slurs that have been used by skeptics throughout the centuries.

When I first merited to meet my Rebbi, Harav Nesanel Quinn, zt”l, he was already well into his eighties. In his youth, he merited to be meshamesh Harav Baruch Ber Leibowitz, zt”l, the Rosh Yeshivah of Kamenitz, and had a close relationship with many of the leading Poskim and Rebbes of the previous generation. I was often astounded at the degree of his subjugation to the contemporary Rebbes and Rabbanim — most of whom were decades younger than he. I later realized that it is almost always arrogance — the notion that “I understand just as well if not better” — that causes people not to be able to accept daas Torah. Rav Quinn spent a lifetime working on the attribute of humility, and therefore being machnia to Gedolim came naturally to him.

This Motzoei Shabbos, the sixth day of Sivan, 50 days since we began to count the omer, we will b’ezras Hashem celebrate the joyous and uplifting Yom Tov of Shavuos, marking our receiving the Torah on Har Sinai.

The Magen Avraham on Shulchan Aruch (Orach Chaim 494:1) poses this question, and states that the fact that we celebrate Shavuos on the 50th day of Sefirah, even though the Torah was given on the 51st, alludes to the two days of Yom Tov that are observed by the Jews of the Diaspora.

Yom Tov Sheini shel Galuyos is a hallowed custom that has the status of a mitzvah d’Rabbanan. The sanctity of this mitzvah is so great that we do not don tefillin on the second day of Yom Tov —though tefillin is a mitzvas asei mid’Oraisa.

It is noteworthy that the Pieczesna Rebbe, Hy”d, in his sefer Eish Kodesh (Parashas Behar), writes that the Gemara (Shabbos 88a) which teaches that Har Sinai was plucked from its place and held over Am Yisrael like a tub — and Am Yisrael was told that unless they accept the Torah they will not remain alive — is referring to the mitzvos and gezeiros of the Rabbanim.

As we prepare to usher in the uplifting Yom Tov of Shavuos, let us daven that we will merit to internalize the message of the Yom Tov Sheini shel Galuyos — and recognize that our very survival as Torah Jews is dependent on our ability to set aside arrogance and bias, and unquestioningly follow the directives of our Gedolim in regard to the appropriate use of technology and all other areas of life.