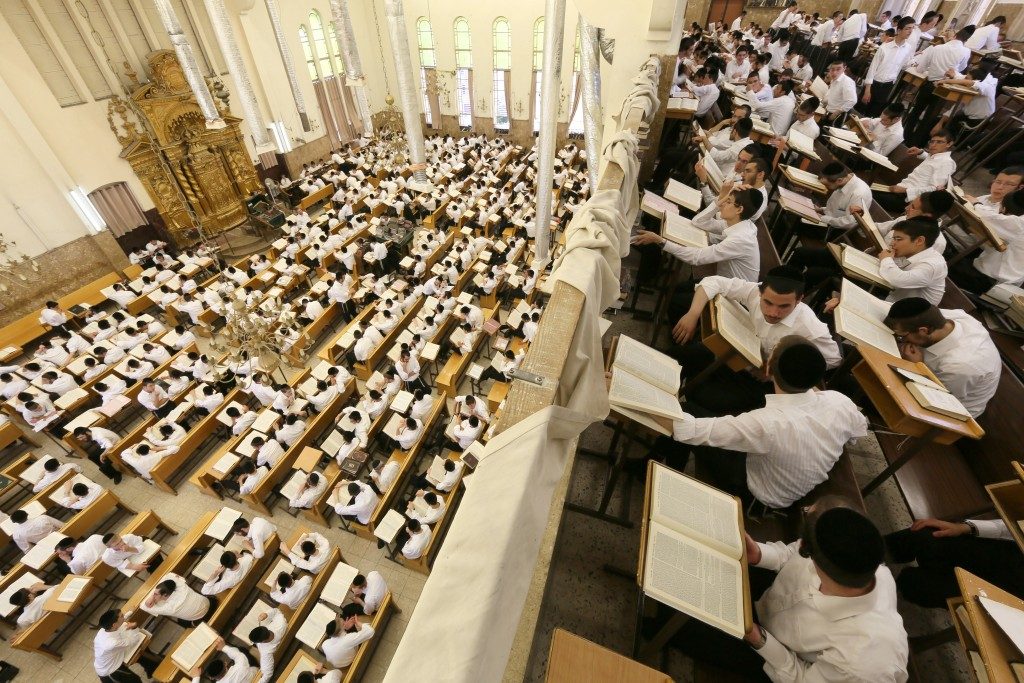 In one of the few Aggadah Gemaros in Maseches Zevachim (116a), Rabi Elazar Hamoda’i tells us what was taking place around the world at the time of Kabbalas HaTorah. The sound of the Ribbono shel Olam was heard throughout the world, and kings trembled from great fear. They came and sought counsel from Bilaam, the prophet of the nations, and inquired as to what the great commotion was all about. They said, “Perhaps the world is about to be flooded.” Bilaam responded that this cannot be, as Hashem swore never again to bring a flood. They then asked if a flood of fire was coming. Once again Bilaam said this was not the case.

Told that their speculations were mistaken, they turned to Bilaam for a clearer answer. Bilaam responded that the sounds meant that they are receiving a “chemdah tovah” — a special treasure that Hakadosh Baruch Hu wishes to give the Torah to Klal Yisrael who are His children. This is the meaning of the passuk “Hashem oz l’amo yitein.” The nations then responded “Hashem yevarech es amo bashalom,” Hashem should bestow peace upon His nation — Klal Yisrael.

The Lubliner Rav, Harav Meir Shapiro, zt”l, asks, “Why did the kings think that the world was coming to an end? Furthermore, upon hearing the answer, why did they bless Klal Yisrael with the brachah of shalom?” The Lubliner Rav answers as follows: When Klal Yisrael stood at Har Sinai ready to receive the Torah, they were “K’ish echad b’leiv echad,” completely unified in preparation for this great event, and the nations were baffled by this unity. In their minds, the only things that could bring such achdus in Klal Yisrael are tzaros and tragedies. They therefore conjectured that a great calamity was about to happen and all the Yidden were gathering to figure out how to solve this difficult and dangerous situation. Bilaam told them no, this was not the case.

He explained to them that there is something else that brings unity to Klal Yisrael, the Torah. Bilaam foretold that Yidden in all generations and in all corners of the globe would study the same Torah and would share and discuss insights; that the Torah would be at the center of every community, kehillah, family, and individual. Torah giants from different generations would converge on each blatt of Gemara to understand every word through great hasmadah and discussions of peirushim from previous centuries.

Furthermore, those who properly follow the Torah would be at peace with each other and themselves. (Indeed, the Lubliner Rav was the founder of the Daf Yomi with the goal of “gantz Klal Yisrael” learning the same blatt every day so a Yid from Kalisz, Poland, visiting Vilna, Lithuania, would be on the same daf as the locals. Daf Yomi has certainly been a unifying force in Klal Yisrael for the past 94+ years.) When the kings heard this, realizing that for their own needs, Klal Yisrael’s unity through the Torah is a far better alternative than unity brought about by fear of worldwide calamities, they blessed Klal Yisrael with a brachah for peace: “Hashem yivarech es amo b’shalom.”

Indeed, Torah is the ultimate “peacemaker” of Yidden; it is our common fabric. In 1989, when I was learning in the Kollel of San Diego, as part of our outreach programming we visited Las Vegas, Nevada, and delivered shiurim on various topics. At the time, Las Vegas had only one Orthodox shul — Congregation Shaarei Tefilla — and no Rav. (Of course, today there are several mosdos HaTorah, shuls and Rabbanim who are marbitz Torah on a daily basis — but this was before they arrived.) I was privileged to spend Shabbos Shirah there, and after Mussaf there was a program and lunch, followed by Minchah. Later that afternoon I went back to the empty shul and saw a large, beautiful Shas. I sat down and learned Maseches Megillah. The thought occurred to me that here I am in this midbar (literally) learning from the same Gemara that we have in our kollel. It is the same Shas learned in batei midrashim and in homes worldwide — b’chol t’futzos Yisrael — what greater unity to Klal Yisrael than the Torah HaKedoshah!

As a follow-up to Shavuos, the Shabbos afterwards is almost always Parashas Nasso in which the Torah addresses the mitzvah of nesias kapayim which Kohanim fulfill (in chutz la’aretz only on Yom Tov). The last brachah they give is shalom — peace.

I once heard a beautiful explanation of this brachah and an important yesod regarding shalom from Harav Aharon Feldman, shlita, Rosh Yeshivah of Yeshivas Ner Yisroel, based on the Gra (as addressed in the Siddur HaGra, p. 121). As we know, nesias kapayim is recited in three parts, followed by “amen” after each brachah. When written out with each brachah on one line, the beginning of each brachah is on the right side and the end of the brachah is on the left. For example, “yevarechecha” is on the right and “v’yishmerecha” is on the left. Each brachah represents something fundamental. Furthermore, just as the purpose of the left hand is meant to support the right hand, the left-hand brachos are used to support the right-hand brachos.

On the right-hand side, it says “yevarechecha,” which the Gra states is chochmah (wisdom). Then, on the left is “v’yishmerecha,” which the Gra says is wealth and money. Obviously, money is on the left to support, as it is not a goal in and of itself, but rather a means to obtain chochmah. The words of the second brachah represent chaim on the right and kavod (honor) on the left. Once again, kavod is not a goal, but, rather, treating others properly and being treated in a b’kavodig manner is the means to living a productive life. The last brachah has banim (children) on the right and shalom on the left. Why is shalom on the left? Isn’t peace one of the primary goals of life?

Rav Feldman answers that peace is not a goal in and of itself. If we live a life of peace and do nothing with the situation but indulge in pleasure and self-gratification, what is it worth? Peace is the important backdrop to our serving the Ribbono shel Olam. We daven for shalom so that we can learn more Torah and accomplish more mitzvos in this world. If, chas v’shalom, we are not at peace, we cannot accomplish our tafkid, as we are busy trying to stay safe and calm.

Klal Yisrael stood at Har Sinai, unified under the banner of Torah. Every Yom Tov, the Kohanim give us the brachah of shalom — for ourselves, our families, kehillos, communities and all of Klal Yisrael. It is our job to utilize that brachah as support for our personal growth and that of our families and other Yidden whom we know, in Torah and yiras Shamayim. If we do that, we emulate Klal Yisrael at their crowning moment in world history, the greatest and most important event ever, Kabbalas HaTorah.

Rabbi Dovid Heber is the Rav of Khal Ahavas Yisrael Tzemach Tzedek, in Baltimore, and a Kashrus Administrator at the Star-K Kosher Certification.