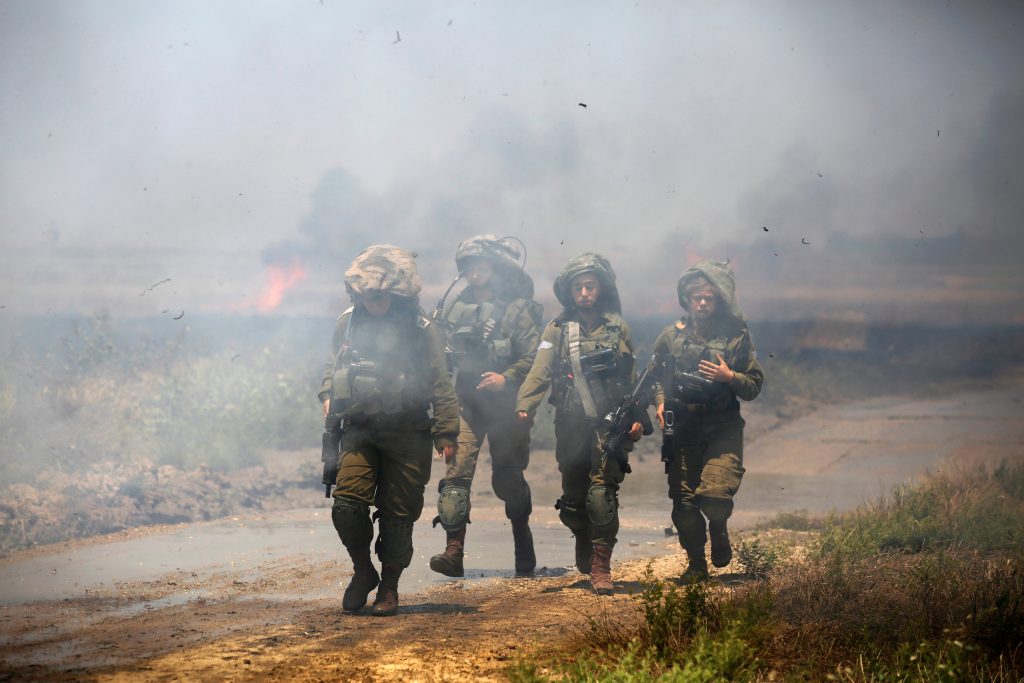 Red Alert sirens were heard Tuesday morning in Israeli towns in the Gaza border area. Security forces were investigating where, or even if, the alarm meant that rockets had been fired by Gaza terrorists at Israel. Officials in the region said they had not heard any explosions, and that they had not received reports of injury or damage. Officials later said that the sirens were a false alarm.

Israeli forces remained on high alert Tuesday along the Gaza border, as the day of the long-promised “March of Return” arrived. Security officials expect major rioting later on Tuesday, after the funerals of 59 Gaza Arabs killed in rioting Monday. According to Gaza sources, one of the dead was an 8-month-old infant, who had been brought to the riot Monday by her parents. The baby reportedly died of exposure to tear gas, which the IDF used to disperse the rioters who were attempting to break through the border fence into Israel.

While forces were prepared to fend off rioters throughout the night, security officials said that the hours overnight Monday passed relatively peacefully. The large majority of rioters began leaving the border area about 6:30 p.m., and Hadashot News reported that they were responding to calls by Hamas to go home. It was not clear why Hamas had issued that call, but security officials were hopeful that rioters had expended much of their energy on Monday, which would perhaps portend a quieter day Tuesday.

While several countries condemned Israel for the events at the Gaza border Monday – both Turkey and South Africa recalled their ambassadors to Israel in protest, blaming Israel for the deaths of “innocent civilians,” according to Ankara – the White House said that the deaths were the responsibility of Hamas, which was using the Gaza population as part of a “gruesome and unfortunate propaganda attempt. “We believe that Hamas as an organization is engaged in cynical action that is leading to these deaths,” White House deputy press secretary Raj Shah told reporters. “The responsibility for these tragic deaths rests squarely with Hamas.”

In the wake of the U.S. condemnation, Australia also slammed Hamas for the Gaza deaths. Prime Minister Malcolm Turnbull said in a radio interview that it was Hamas that was “seeking to provoke the Israeli defense forces. They’re pushing people to the border. In that conflict zone, you’re basically pushing people into circumstances where they are very likely to be shot at.”

Security forces were also on high alert in Yehudah and Shomron. The Palestinian Authority declared Tuesday a “day of mourning” and instituted a general strike. All schools and businesses in PA-controlled areas are closed Tuesday, and mass rallies have been called. Reinforcements have been sent to sensitive areas, like checkpoints and outside Israeli towns in Yehudah and Shomron. Officials said that the fact that Tuesday was the first day of Ramadan made the situation even more sensitive.