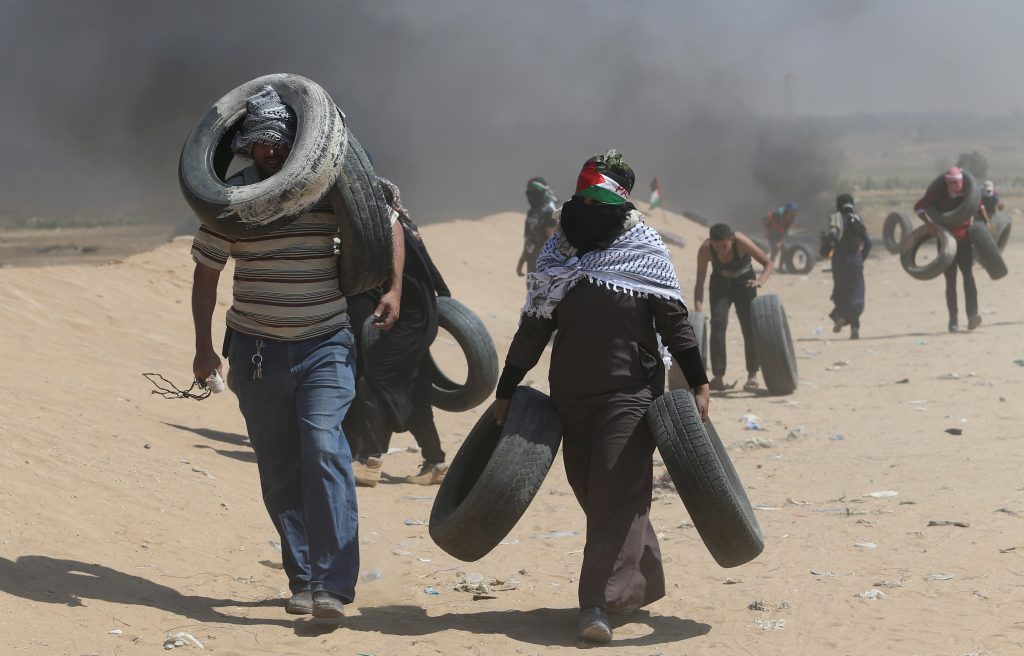 The IDF Tuesday afternoon released information about an attempted border crossing by the Hamas terror group during riots on Monday.

The IDF said that on Monday afternoon, when Israeli forces confronted violent disturbances near the fence, an intelligence alert was received that a Hamas squad was planning to place an explosive charge on the fence to allow a mass infiltration into Israel.

Troops of the IDF’s Magellan unit stationed themselves opposite the expected attack point in the northern Gaza Strip. When the group of eight terrorists emerged from amidst the violent demonstration which was taking place, they threw pipe bombs and stones toward the IDF soldiers.

According to the IDF statement, the terrorists fired at troops from two different locations, one from a hill 200 meters from the Gaza security fence and another point some 30 meters from the border.

Surveillance footage from the clash shows the suspected terrorists hiding behind a pile of burning tires. As the IDF’s army jeeps pulled up, at least six explosives are seen being thrown toward the border.

Troops then engaged the terrorists, opening fire at them from Israeli territory while a tank and IAF aircraft struck the terrorists’ position. All eight terrorists were killed in the exchange.

“[Monday], during a violent riot, which included the burning of tires, throwing of pipe bombs and throwing of stones, we saw shots fired at our forces and realized that Hamas operatives were the ones who carried out the shooting. Due to this, the crowed dispersed and I gave an order to fire. The soldiers were operating professionally, with great courage and precision, and prevented a significant shooting attack on our forces,” a commander in the unit said.

Later, when IDF troops inspected the scene, they found that the terroristst were in possession of a handgun, grenades, wire cutters and crowbars to seemingly use to breach the fence.

Also Tuesday, the IDF and Shin Bet said that at least 24 out of the 60 Palestinian rioters killed during Monday’s riots on the Gaza border were terrorists – most of them members of Hamas and some from the Islamic Jihad terror group.

The Gazan Health Ministry said that in addition, a 9-month-old girl died from tear-gas exposure, but medical officials later cast doubt on that claim, saying the infant had a pre-existing medical condition.

Avichai Adrei, the IDF spokesman in Arabic, expressed doubts about the death of the baby from the inhalation of tear gas. He noted that “We have a number of testimonies that cast doubt on the reliability of the claim.”

Several hundred demonstrators gathered at several locations along the Gaza border on Tuesday. No serious incidents have occurred thus far, the IDF stated.

The army believes that the quiet on Tuesday is likely due to Hamas assessing their losses and calculating their next step.