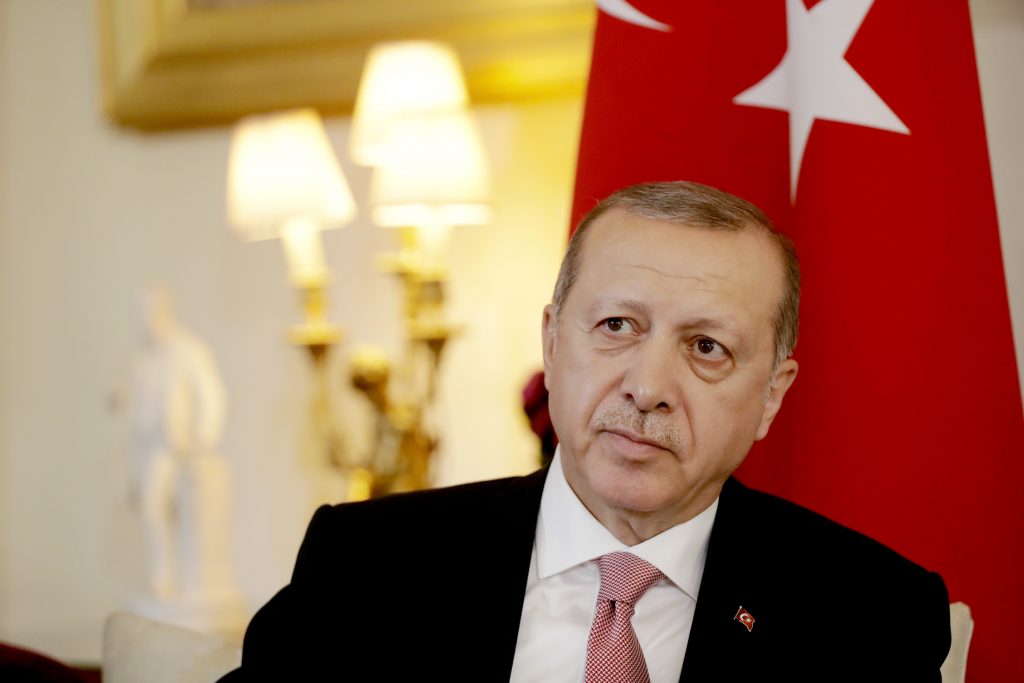 The Israeli-Turkish reconciliation, years in the making, appeared to come apart on Tuesday, as Israel expelled the Turkish consul in Yerushalayim, in retaliation for Turkey’s expulsion of Israel’s ambassador in Ankara earlier in the day.

The tit-for-tit exchange came a day after Turkey recalled its ambassadors to Israel and the U.S. in a fury over the bloodshed in Gaza. Turkey blamed Israel, while Israel tried to explain to Ankara and the international community that it must defend its border against Hamas-driven riots and terror attacks under the cover of purportedly peaceful demonstrations.

Meanwhile, Turkish President Recep Tayyip Erdoğan ramped up the level of belligerence. He posted another broadside against Israel, calling it an “apartheid state,” and that Israeli Prime Minister Binyamin Netanyahu “has the blood of Palestinians on his hands and can’t cover up by attacking Turkey.”

“Want a lesson in humanity? Read the Ten Commandments,” the Turkish leader taunted.

In a scathing response, Netanyahu said that “Erdogan is among Hamas’s biggest supporters and there is no doubt that he well understands terrorism and slaughter. I suggest that he not preach morality to us.”

“The man who sends thousands of Turkish soldiers to maintain the occupation of northern Cyprus and invades Syria, will not preach to us when we defend ourselves against invasion by Hamas. A man whose hands are drenched in the blood of countless Kurdish civilians in Turkey and Syria is the last one who can preach to us about military ethics,” Netanyahu said in an official statement on Tuesday.

Meanwhile, Turkey declared three days of mourning over 60 Palestinians killed at the Gaza border on Monday and Tuesday, and called for an emergency meeting of Islamic nations to be held on Friday to discuss the crisis.

There have been large demonstrations against Israel in Istanbul and in the capital Ankara. Erdogan, who is campaigning for presidential and parliamentary elections next month, said a rally will be held on Friday to protest the killings.

The Palestinian cause resonates with many Turks, including with the nationalist and religious voters who form the base of Erdogan’s support.

However, a statement to Reuters from a source in the Turkish Foreign Ministry indicated that the diplomatic rupture might only be temporary.

“The Israeli ambassador was told that our envoy to Israel was called back for consultations, and was informed that it would be appropriate for him to go back to his country for some time,” the source said.

In fact, Erdogan launched his rhetorical barrage against Israel even before the bloodshed at the Gaza border this week, suggesting that it may have more to do with Turkish politics than with supposed Palestinian victimization.

On May 7, he proclaimed “that the Palestinians were the “symbol of all oppressed people” in the world and Israeli attacks on them showed that “tyranny’s boldness is increasing every day.”

The Turkish president went on to accuse Israel of “persecution, massacres and injustices” against the Palestinians, in his long tirade at the International Mount of Olives Peace Awards in Istanbul.

In Israel, rhetoric passed to action as Agriculture Minister Uri Ariel ordered the freezing of imports of agricultural produce from Turkey to Israel on Tuesday afternoon, in response to the expulsion of Israel’s ambassador.

Ariel said, “We won’t tolerate a country that preaches morality to the state of Israel with such hypocrisy. The security forces and the IDF soldiers fearlessly protect the residents of Israel.

A political source told Arutz Sheva that the decision to expel the Turkish consul was made because “it seems that the Turks were waiting for an opportunity to harm relations and were not sincere in the [reconciliation) agreement reached with us.”

“Israel is ready to hear honest criticism, but Turkey has long ago passed this threshold,” the source said.

Education Ministry Naftali Bennett said that “Erdogan is soaked in Hamas terrorism from head to toe. It was a grave mistake at the time to sign a compensation for tens of millions of dollars in the wake of the Mavi Marmara,” referring to the 2010 Gaza flotilla raid. Bennett noted that he voted against the reconciliation agreement in 2016, and posted a three-point plan of action for “the Knesset, government and the Israeli public.”

“I turn to the speaker of the Knesset to approve the official recognition by Israel of the Armenian genocide perpetrated by Turkey,” Bennett said. “I submitted a request to the prime minister to discuss the recognition of the right of the Kurdish minority in Syria and beyond recognition and autonomy,” he added, calling on the Israeli public “to cancel trips to Turkey, immediately.”

Tzipi Livni, a senior member of the Israeli opposition, called on “Erdogan and the rest of the world not to be confused — Israel left Gaza and left a border behind it.”

Israeli-Turkish relations, which had been friendly and cooperative for years, went into a downspin following the 2010 Gaza flotilla incident, in which several Turkish nationals were killed as the IDF fought off armed resistance when they boarded their vessel Mavi Marmara, as it tried to run the blockade of Gaza.

At the same time, Turkey approved the reconciliation agreement in a parliamentary vote in Ankara, and made it a law. As part of the agreement, it was decided that all the suits filed in Turkey against Israeli soldiers and officers involved in the takeover of the Gaza flotilla would be dropped.