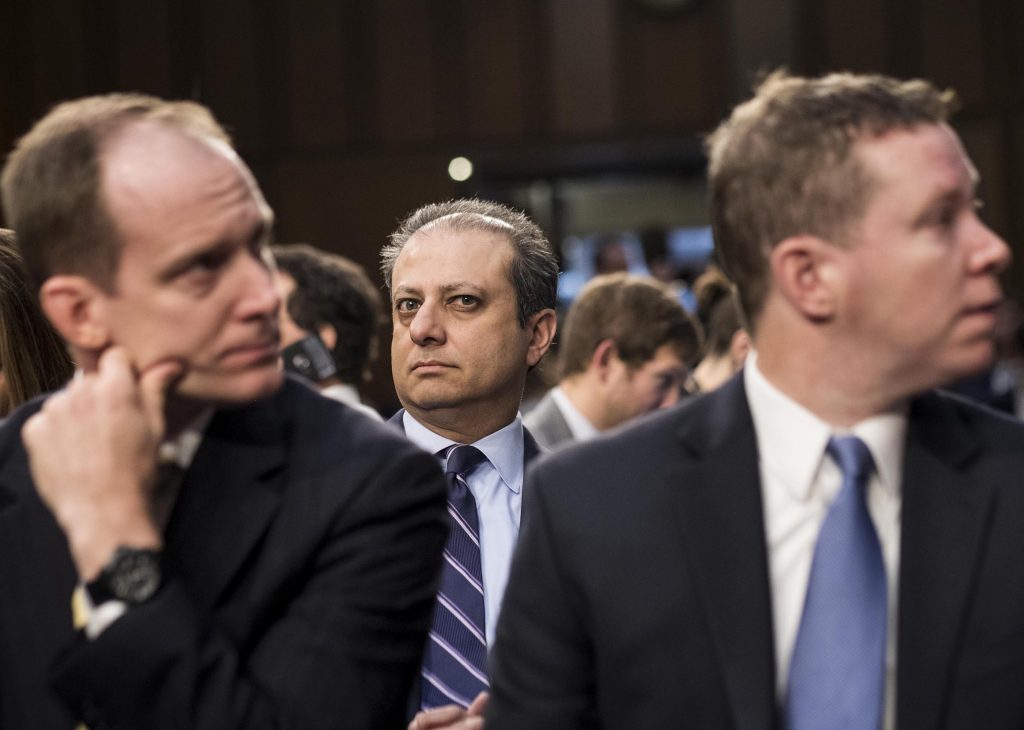 Preet Bharara is said to be weighing a run for the suddenly vacant spot of New York attorney general, leveraging the corruption-busting reputation he got as the former top federal prosecutor in New York to possibly run as an independent, free of ties to Democrats and Republicans.

“Running as an independent, that would be the first defining message of his campaign,” said William Cunningham, an aide to three former New York governors and Mayor Michael Bloomberg. “Being attorney general is an easy fit for a former U.S. attorney.”

Bharara’s name was floated as possible attorney general almost instantly after Eric Schneiderman quit as New York state’s top cop on May 7. Bharara, 49, served almost eight years as U.S. attorney in New York, where he spearheaded a historic crackdown on insider trading and targeted corruption in state government before he was fired by President Donald Trump on March 11, 2017.

But Bharara remains in the spotlight, hosting a popular podcast about law, justice and politics, and maintaining a frequent presence on cable news. In addition to teaching at New York University School of Law, he’s writing a book for which he reportedly received an advance of more than $1 million from publishing house Alfred A. Knopf.

He enjoys his new life, according to a person familiar with his thinking.

“It’s flattering,” Bharara said on CNN last week about the talk of him running. “Other people have put the thought out there. I’m not putting it out there. And I’m happy doing what I’m doing now.” But he refused to rule it out during the interview and during his weekly podcast called, “Stay Tuned with Preet.”

Schneiderman’s replacement will play a big role in challenges to Mr. Trump’s policies ranging from protection of the environment to safeguarding rights of undocumented immigrants. The office also enforces state laws regulating Wall Street, non-profits and charities. Barbara Underwood, a Democrat who served as state solicitor general, is temporarily heading the office pending an appointment to be made by the Democratic-controlled state legislature.

Bharara has prosecuted both Democrats and Republicans and been criticized by leaders in both political parties. He’s also made it a bit of a habit to troll Mr. Trump on Twitter, telling the president Oct. 31, 2017: “Keep up the tweeting. Seriously, keep it up,” in response to a series of Trump tweets that followed the indictment of his former campaign Chairman Paul Manafort.

Bharara, who appears regularly on CNN as a commentator, has the resumé to campaign successfully as an independent, said Hank Sheinkopf, a Democratic political consultant who helped pull off the last upset in an election for attorney general when Eliot Spitzer won the office in 1998.

“He has a great argument to make as a candidate: ‘I’m the only one who’s taken on corruption and sent politicians to jail,’” Sheinkopf said.

The election calendar would work to Bharara’s advantage. Major party candidates seeking a statewide nomination must collect petition signatures from June 5 to July 24. Independents have from July 10 to August 21, which would give Bharara time to know the competition and test how much voter-support he could attract.

Bharara, who was born in India, made headlines as U.S. attorney for a legal offensive on insider trading. In time, he was criticized for overreaching and being too eager to make headlines; more than a dozen convictions were tossed out following a 2014 appeals court decision modifying insider-trading law.

Aside from raising the millions of dollars needed for advertising in one of the nation’s most expensive media markets, Bharara, as an independent, would need to pull together a statewide organization that could compete with get-out-the-vote efforts run by the mainstream parties.

“I’ve said many, many times, politics is not my cup of tea,” he said.

In other words: Stay tuned.