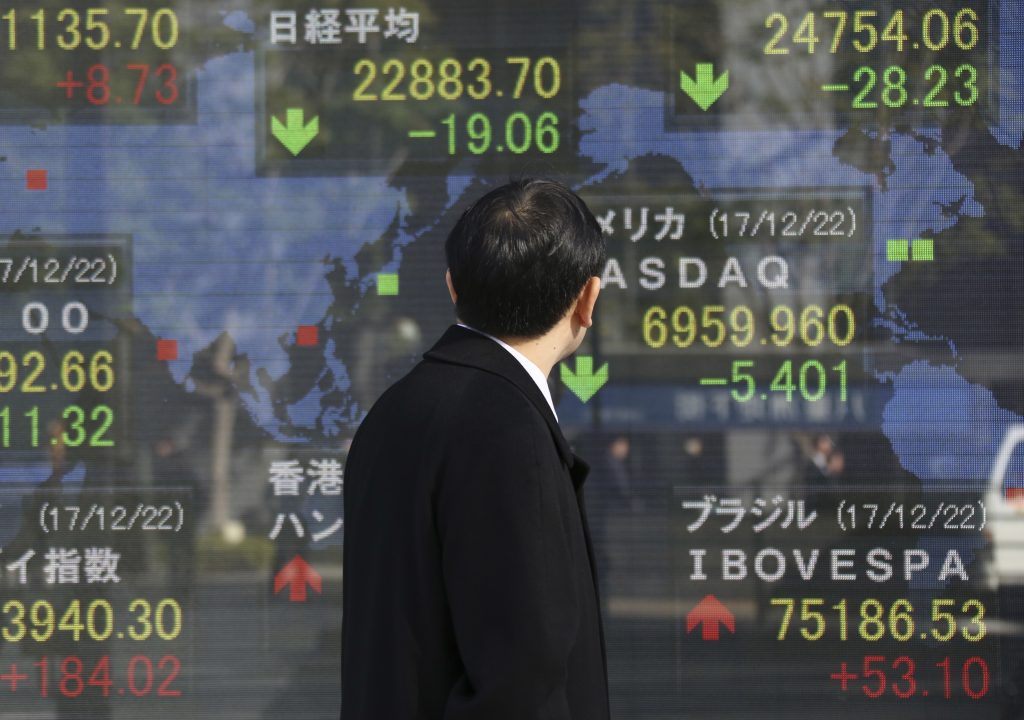 MSCI’s broadest index of Asia-Pacific shares outside Japan dipped 0.65 percent after rising the previous day to its highest since late March. The index had rallied for three straight sessions prior to Tuesday.

“The markets appear to be taking a breather after their recent surge, awaiting fresh developments in matters such as U.S.-China trade issues and Washington’s upcoming summit with North Korea,” said Yoshinori Shigemi, global markets strategist at JP Morgan Asset Management in Tokyo.

Australian stocks were down 0.35 percent after briefly touching a four-month high and South Korea’s KOSPI shed 0.55 percent. Japan’s Nikkei was a shade lower, its surge to a three-month peak bogging down.

Hong Kong’s Hang Seng lost 0.5 percent, pulling back from a two-month peak to snap a five-day winning run and Shanghai inched up 0.05 percent.

Investors in Chinese equities will likely re-jig their exposure after MSCI, the U.S. index publisher, published its latest index weighting.

MSCI said on Tuesday that 234 Chinese large caps will be partially included in its global and regional indexes on June 1, following an index review ahead of China’s inclusion in MSCI’s widely tracked equity benchmarks.

While higher oil prices sometimes raise inflation concerns, the recent crude oil surge – Brent has risen 17 percent so far in 2018 – was seen to be generally supportive for equities.

“The recent rise in prices of crude oil won’t have a broadly negative impact on equity markets if it continues at the current pace,” said Masahiro Ichikawa, senior strategist at Sumitomo Mitsui Asset Management in Tokyo.

“The rise in oil prices is boding well for certain stock sectors like energy shares.”

Oil prices received their latest lift as OPEC reported that the global oil glut has been virtually eliminated. Tensions in the Middle East and uncertainty about output from Iran amid renewed U.S. sanctions have contributed to the recent rise in oil prices.

“The commitment of Saudi Arabia and the rest of OPEC to the production cuts is a major factor in supporting the price at the moment as well as the possibility of reduced exports from Iran due to sanctions,” said William O’Loughlin, investment analyst at Rivkin Securities.

In currencies, the dollar index against a basket of six major currencies nudged up 0.05 percent to 92.643.

The greenback took a knock against the euro earlier on Monday after European Central Bank policymaker Francois Villeroy de Galhau said the ECB could give fresh timing guidance of its first rate hike as the end of its exceptional bond purchases approaches.

The dollar was a shade higher at 109.745 yen, adding to the previous day’s gains.

The currency drew support as U.S. Treasury yields rose amid the easing of U.S.-China trade tensions.

The 10-year Treasury note yield was at 2.998 percent after rising about 2.5 basis points overnight.