Israel Yerushalayim Police Prepared for Traffic, Riots, and Everything Else on ‘Embassy Day’
Israel 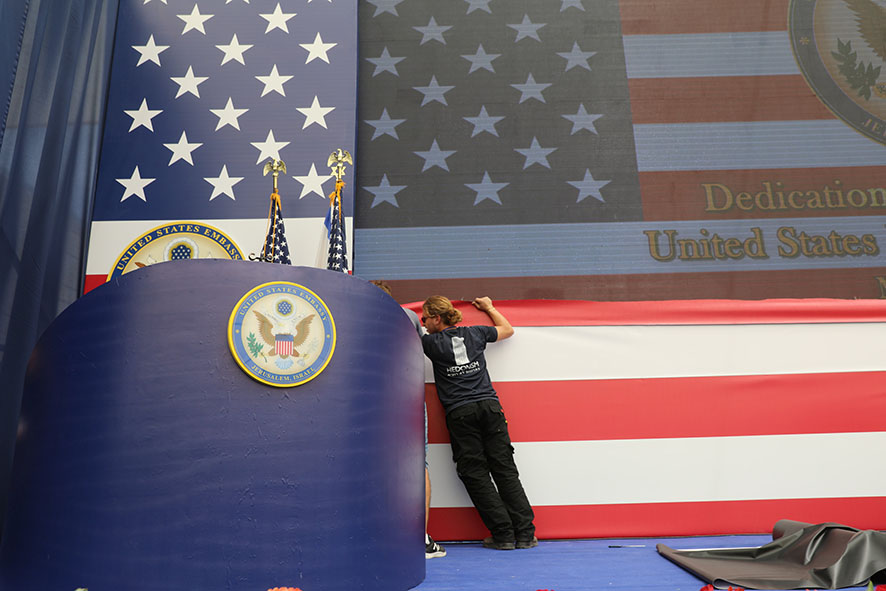 Over a thousand extra police were in Yerushalayim Monday, as the city prepared for the gala event Monday afternoon, when the United States is to officially open its embassy in the city. Streets around the embassy, in the Armon Hanatziv neighborhood, were closed, and checkpoints and security checks were set up in several perimeters, to ensure that the the ceremony goes smoothly.

While that might be sufficient to ensure that the ceremony itself goes smoothly, other parts of the city may not experience as quiet a day. Palestinian groups have called on Arab residents of Yerushalyim to riot and confront police and Border Guards, with the height of the rioting expected as the embassy ceremony takes place. Hamas issued a call to Yerushalayim Arab residents to “get as close to the embassy as possible,” and riot there.

While there are no specific security warnings, a police official told Channel Ten that “events like this create motivation on the part of radical forces who think they can send messages using violence or terror. We will ensure that everyone can celebrate this event safely.”

Several security incidents took place in Yerushalayim Sunday night and Monday morning. A firebomb was thrown at the home of a Jewish family in the Shimon Hatzaddik neighborhood, which is largely Arab. A police officer who was patrolling the area at the time was lightly injured in that incident. Rioting took place in the Shuafat neighborhood, and anti-Arab graffiti – attributed to Jewish “price tag” activists – was found on a wall in Shuafat.

Also attending will be 30 of the 86 international ambassadors stationed in Israel, including the ambassadors of Hungary, the Czech Republic and Bulgaria – all members of the European Union, and defying the announced policy of the EU to boycott the event. Also refusing to attend were Russia, Egypt, Germany, Poland, Austria, Ireland, Malta, Portugal, Sweden and Mexico.

Current U.S. Ambassador to Israel David Friedman will, of course, be in attendance, but Dan Shapiro, who was ambassador during the Obama administration, was not invited, Yediot Acharonot reported.

While all Knesset members were invited, some – such as Meretz head MK Tamar Zandberg – will not be attending. Zandberg said Sunday that she would boycott the event, because, she claimed, it will make it more difficult to persuade the Palestinians to negotiate with Israel.