Business Asian Stocks Up on Hopes of Thaw in U.S.-China Trade Tensions
Business 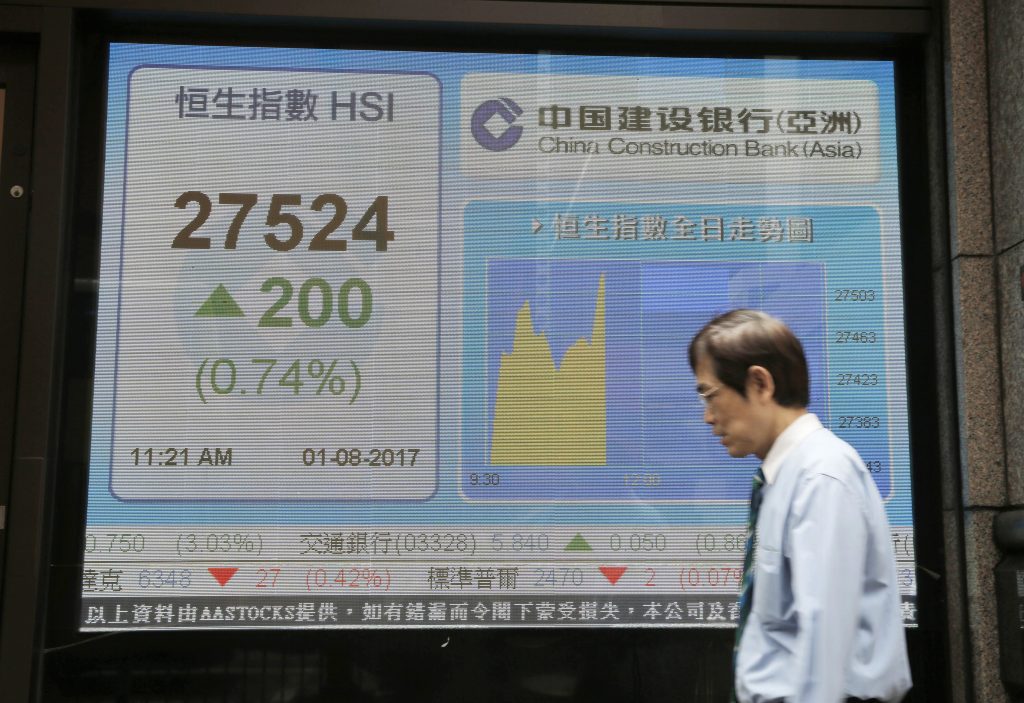 Asian shares rose to near two-month highs on Monday on hopes of a thaw in U.S.-China trade tensions as President Donald Trump pledged to help ZTE Corp. “get back into business, fast” after a U.S. ban crippled the Chinese technology company.

Spreadbetters signaled a flat start for European shares with FTSE futures off 0.07 percent, while E-Minis for the S&P 500 rose 0.3 percent.

Trump’s comments on Sunday came ahead of a second round of trade talks between U.S. and Chinese officials this week to resolve an escalating trade dispute. China had said last week its stance in the negotiations would not change.

Chinese shares came off the day’s highs but were still upbeat after Trump’s comments on ZTE , which JPMorgan analysts said was “a significant positive.”

“The fact Trump is now … working to find a resolution for ZTE marks the latest sign of thawing in Beijing-Washington relations,” JPMorgan said.

“Trump also needs China to remain on his side ahead of his meeting with North Korea’s Kim, and this also suggests that until the 12 June meeting the signaling from the U.S. on trade will be more positive.”

The United States has said it will lift sanctions on Pyongyang if North Korea agrees to completely dismantle its nuclear weapons program.

Elsewhere in Asia, the Malaysian ringgit slipped 1 percent to a four-month trough against the dollar in the first onshore trade since a shock election upset last week. It has come off lows since then, while Malaysian stocks sank as much as 2.7 percent at one point but have bounced back to be last up 0.7 percent.

Malaysian veteran Mahathir Mohamad came out of political retirement to lead the opposition Pakatan Harapan (Alliance of Hope) to a stunning victory against prime minister Najib Razak, a former protege he had accused of corruption.

Some investors were concerned that populist promises such as repealing an unpopular goods and services tax and restoring a petrol subsidy could undermine the country’s finances.

But some analysts on Monday said Mahathir’s proposals could be positive for the economy.

“The repeal of GST, while only marginally negative for the fiscal deficit, will be a boon for consumers, who have been upset that they bear the burden of poor fiscal management and came out to vote against the establishment,” said Trinh Nguyen, senior economist at Natixis.

While tensions in the Korean Peninsula have eased, U.S. plans to reintroduce sanctions against Iran have stoked anxiety in the Middle East.

Iran pumps about 4 percent of the world’s oil, and the latest development has sent oil prices near multiyear highs.

The United States threatened on Sunday to impose sanctions on European companies that do business with Iran, as the remaining participants in the Iran nuclear accord stiffened their resolve to keep that agreement operational.

In currencies, the dollar dip was barely changed at 92.506 against a basket of major currencies after three straight days of losses. Against the Japanese yen, it ticked up to 109.46 per dollar, remaining largely in a holding pattern since late last month.

The euro inched 0.1 percent up to $1.1958 following two consecutive sessions of gains as Italy’s anti-establishment parties looked likely to form the next government.

Last week, the Bank of England held rates steady and New Zealand’s central bank said the official cash rate will remain at historic lows of 1.75 percent for “some time.”

That leaves the Fed as the only major central bank in the world committed to rate increases although recent data showing moderate inflation reading has cast doubt over the pace of any hikes.