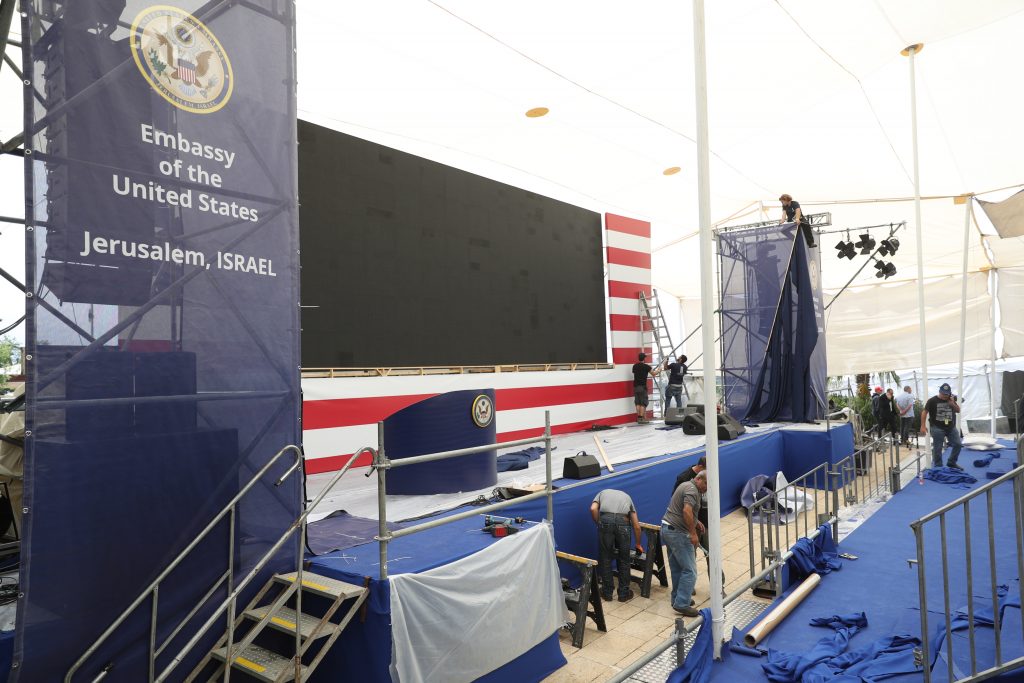 Israel is preparing a series of festivities to celebrate the opening of the new U.S. Embassy in Yerushalayim Monday.

A reception on Sunday will include members of a delegation led by President Donald Trump’s daughter Ivanka, his senior adviser and son-in-law Jared Kushner and Secretary of Treasury Steven Mnuchin.

Dozens of foreign diplomats are expected, though many ambassadors of European nations who oppose the move will skip it. Hungary, the Czech Republic and Romania have reportedly blocked a joint EU statement on the issue.

“President Trump promised to recognize Yerushalayim as the capital of Israel and he did so. He promised to move the American Embassy to Israel and he is doing so. Of course we will all celebrate this day, a real celebration, tomorrow,” he said at a weekly Cabinet meeting, Sunday.

Most countries have traditionally kept their embassies in Tel Aviv rather than in Yerushalayim. But after Trump’s move both Guatemala and Paraguay announced that they planned to follow suit.

The U.S. Department of State announced that Ambassador David M. Friedman will preside over the dedication ceremony and Deputy Secretary John J. Sullivan will lead the Presidential Delegation to the historic opening along with Secretary of Treasury Steven Mnuchin.

As President Donald Trump stated on December 6, 2017, the historic opening of the U.S. Embassy “recognizes the reality that Jerusalem is the capital of Israel and the seat of its government.

“Seventy years ago,” said Trump, “the United States, under President Harry S. Truman, became the first nation to recognize the State of Israel. Moving our embassy is not a departure from our strong commitment to facilitate a lasting peace deal; rather it is a necessary condition for it.”

While in Yerushalayim as the head of the delegation, Deputy Secretary Sullivan will also meet with Prime Minister Binyamin Netanyahu, Deputy Minister of Foreign Affairs Tzipi Hotovely, Ministry of Foreign Affairs Director General Yuval Rotem, and members of both the U.S. Embassy and Consulate General staff.

Israel’s security forces have readied themselves for Palestinian protests to mark the embassy move from Tel Aviv and the anniversary of the founding of the state, with the Islamist terror group Hamas talking of attempts to breach the Gaza-Israel border.

Most Israelis, from across the political spectrum, see the U.S. Embassy move as a rubber stamp on recognition of Yerushalayim as Israel’s capital.

Israel has always regarded the city as its eternal and indivisible capital but the city has not gained that recognition internationally.