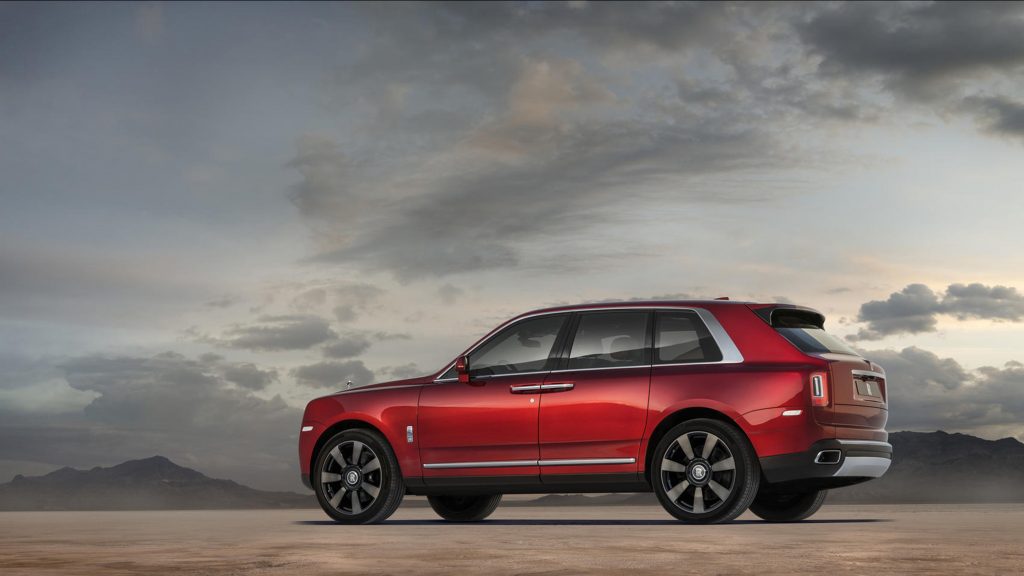 First there was Bentayga. Then Urus. Now there is Cullinan. These are ultra-luxury SUVs starting over $200,000. Rolls-Royce is last to the SUV party with the Cullinan, and the most expensive.

Starting at $325,000, Cullinan is nearly $100,000 more than Bentley Bentayga. Rolls-Royce expects it to plow the same path in becoming the bespoke brand’s best-selling model.

“Cullinan is a major departure from the norm for Rolls-Royce, but it is a departure that our customers welcome,” Rolls-Royce CEO Torsten Muller-Otvos said in a promotional video for the vehicle’s online launch.

The fifth model in the prestige British brand’s family deviates from the specterlike naming of the Ghost, Wraith and Phantom into more illuminating territory ushered in by the Dawn, which launched in 2015. Cullinan is named for the largest rough diamond ever found, over 100 years ago, and weighing in at 3,106.75 carats. That’s over a pound.

The Cullinan SUV weighs just under 6,000 pounds and is powered by the same 563-horsepower 6.75-liter twin-turbo V-12 engine found under other Rolls-Royce bonnets. It’s estimated to get 18.8 mpg highway.

Targeting “younger, more adventurous customers,” the brand’s first all-wheel drive sled features all-wheel steering, as it does in the Phantom. At low speeds, the rear wheels turn counter to the front wheels to improve cornering and for narrower U-turns. It also allows for more off-road agility. At higher cruising speeds, the rear wheels turn in the same direction as the front wheels for better stability.

Also used in the Phantom is Cullinan’s air suspension system, which uses electronically controlled shocks for an infinite number of settings and adjustments to the terrain. If one wheel loses traction, that wheel’s shock absorber will push down on it until it makes contact with the ground. In that way, the 627 pound-feet of torque available at just 1,600 rpm isn’t squandered. Rolls-Royce calls it magic carpet ride; if Cullinan is anything like the Phantom, it will float over the road and presumably soak up most off-road terrain.

The adjustable suspension also enables Cullinan to ford water up to 21 inches deep. In much more Rolls-Royce fashion, it also lowers the vehicle’s ground clearance to let in passengers so they don’t have to step. Like other Rolls-Royce models, Cullinan uses “suicide,” or rear-hinged, rear doors for easy egress and ingress.

There is power everything for maximum convenience, including a power split rear lift gate and tailgate, so if you want to access only the stuff on top, you only need to press the button for the glass. Boot space, or cargo volume, is 21 cubic feet with the rear seats up. The power folding bench option includes part of the load floor raising to make it flat when the rear seats are down. There’s no third row of seats, but there is an individual seat configuration with two rear seats separated by a champagne cooler, of course.

There are other RR features, such as a glass partition separating the passenger cabin from the cargo area. The coolest option is the viewing suite. Two folding seats stowed in the load floor deploy with the push of a button for tailgating from the rear of the vehicle, to take in, as Rolls-Royce says in the promo video, “the savanna stretching out in front of you or … your child’s sports day.”