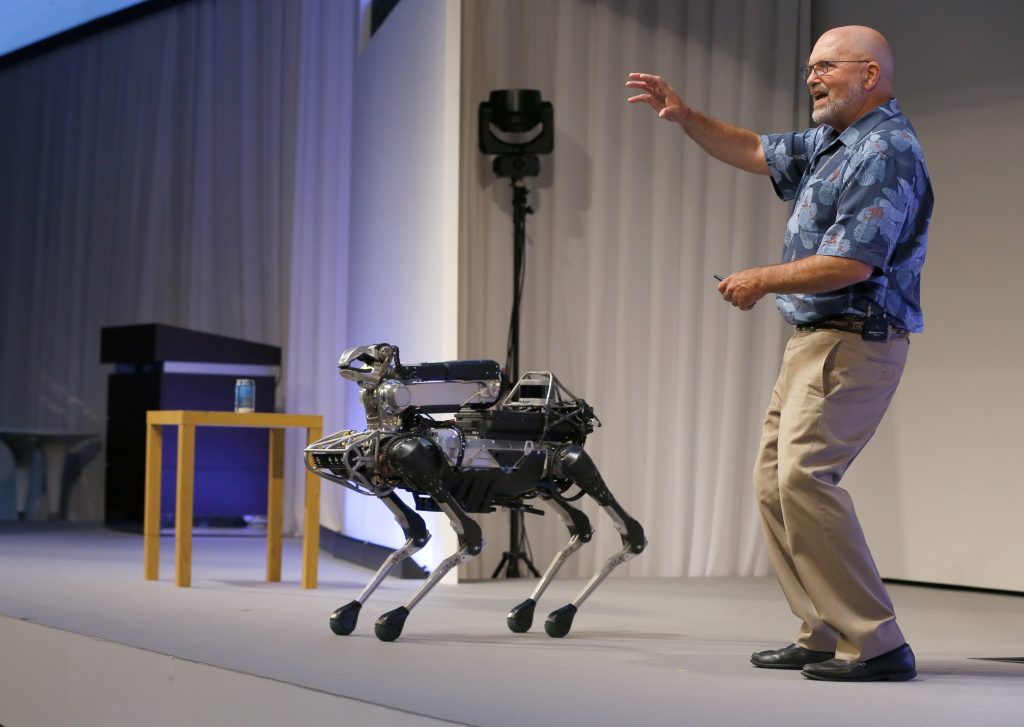 A robotics company known for its widely shared videos of nimble, legged robots opening doors or walking through rough terrain is preparing to sell some after more than a quarter century of research.

Boston Dynamics CEO Marc Raibert said Friday that his company plans to begin selling the dog-like SpotMini robot next year, likely to businesses for use as a camera-equipped security guard.

But he thinks other applications for the four-legged contraption will be likely developed by other companies, because the robot has a flat platform to allow other equipment with its own computer programming to be easily mounted on top of it.

SpotMini gets around with the help of cameras on its front, sides and one mounted on its rear.

Boston Dynamics already has made 10 SpotMinis with plans to manufacture about 100 more for additional testing this year before going into mass production by the middle of next year, Raibert said. No price has been set for the robot yet, though Raibert said making the latest prototype costs about one-tenth the price of earlier versions.

Raibert unveiled the SpotMini plans at the University of California, Berkeley, during a TechCrunch conference focused on the rise of robotics and its potential to perform a wide range of tasks and jobs now handled by humans.

Founded in 1992, Boston Dynamics rarely reveals its plans except by posting social media that have impressed and terrified people. Most of Boston Dynamics’ robotics research had been applied in the military until Google bought the Waltham, Massachusetts, company in 2013. Japanese tech giant SoftBank bought Boston Dynamics from Google last year.

Although Boston Dynamics never released a commercial robot under Google, Raibert credited his company’s former owner for helping it to start thinking of ways to bring its technology to a broader market.

Toward that end, he also showed the conference a video of Atlas, a two-legged robot that has learned how to sort and pick up packages, jump up and off blocks, jog and perform back flips. He said Boston Dynamics still hasn’t figured out how to make money from Atlas yet.

“This machine is really trying to push the boundary of the future,” Raibert said.

He also mentioned the possibility of building robots to help with construction projects, though he didn’t provide any further details about that ambition on Friday.