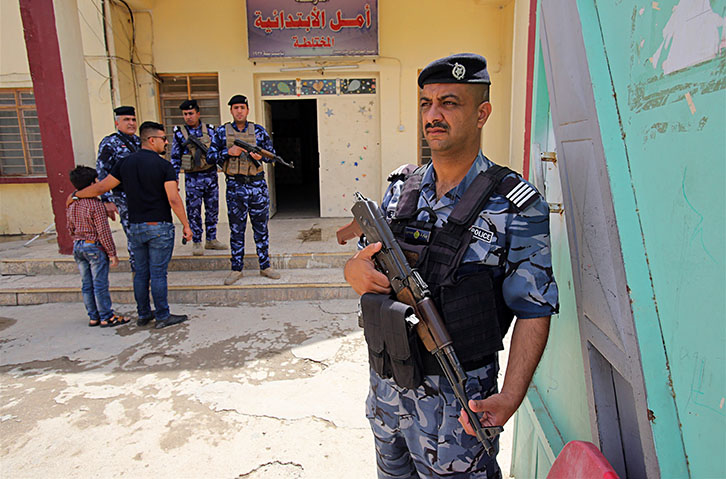 Iraqis vote Saturday in the first parliamentary election since the country declared victory over the Islamic State terror group.

The balloting is expected to be a referendum on Prime Minister Haider al-Abadi’s tenure and his pledge to be more inclusive of Iraq’s Sunni minority.

Entrenched corruption, the influence of Iran and the future of U.S. forces currently in Iraq are other issues that have dominated the run-up to the election.

There are 329 seats at stake, with nearly 7,000 candidates from dozens of different political alliances.

Few foresee a dramatic government shake-up, however. The most powerful alliances expected to win the most seats are headed by the same parties that have dominated Iraqi politics since 2003.

Al-Abadi is seeking to retain his post but faces stiff competition from his predecessor, Nouri al-Maliki, and the Fatah alliance of candidates who have close ties to the powerful, mostly Shiite paramilitary forces.

Fatah is headed by Hadi al-Amiri, a former minister of transport who became a senior commander of paramilitary fighters in the fight against the IS group. Many of the candidates on his list were also paramilitary commanders before they cut their official ties with the force in order to seek office.

Influential cleric Muqtada al-Sadr also leads an alliance. He commanded fighters in the war against IS and headed a powerful militia that fought U.S. forces in Iraq before that, but his campaign has focused on social issues and eliminating government corruption.

Because so many different political alliances are running, no one group is seen as being able to win the 165 seats required for an outright majority. Instead, the bloc that wins the most seats will have to cobble together a majority by getting the support of smaller alliances.

The process of choosing the next prime minister is expected to take months and probably result in power being dispersed across different political parties with clashing interests. The current government is similarly fractured, making it almost impossible to pass legislation.

Until a new prime minister is chosen, al-Abadi will remain in office, retaining all his power.

Polls open at 7 a.m. and close at 6 p.m. (local time). The independent body overseeing the election is estimating high turnout, because it comes amid a relative lull in terror attacks.

Many Iraqis are quick to condemn their current elected representatives because of entrenched corruption and the squandering of the country’s significant oil wealth by previous administrations.

Still, there have been relatively high rates of voter participation, with turnout averaging more than 60 percent in previous elections despite security concerns.

Security has been tightened across Iraq in the days before the election. Baghdad, Mosul and other major cities are imposing curfews on election day, and travel between provinces already has been restricted. As of Friday, airports and border crossings will be closed. Islamic State militants no longer control significant pockets of Iraqi territory, but they do maintain a grip inside Syria along Iraq’s border.

An electronic voting system is being used for the first time this year to try to reduce fraud and speed up the counting process. Results will be released within 48 hours of Saturday’s poll close, according to the independent body overseeing the elections.

The constitution sets a quota for female representation, stating that no less than one-fourth of parliament members must be women. Nearly 2,600 women are running for office this year.

Once results of the election are ratified by Iraq’s Supreme Court, parliament is required to meet within 15 days. Its eldest member will chair the first session, which will elect a speaker. Parliament then must elect a president by a two-thirds majority vote within 30 days of its first meeting.

The president then is charged with naming a member of the largest bloc in parliament — the prime minister-designate — to form a cabinet within 30 days. If that individual fails, the president must nominate a new person for the post of prime minister.

In the past, forming a government has taken up to eight months. In 2005 allegations of vote-rigging delayed the ratification of election results for weeks.