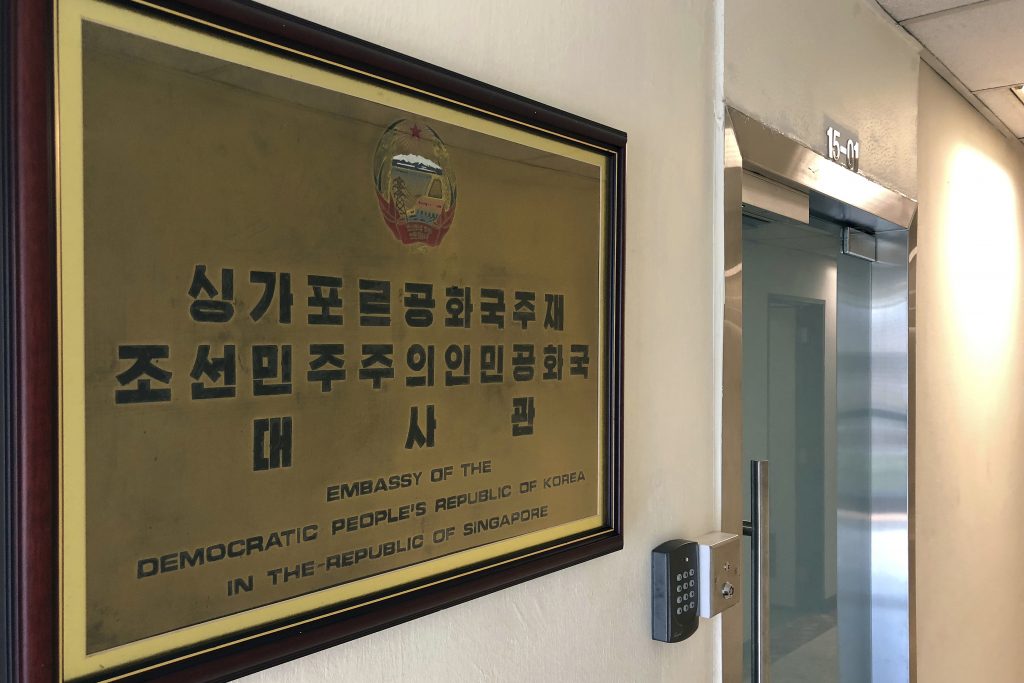 Trump announced in a tweet Thursday the two leaders will meet in Singapore on June 12.

The city is “a great location” for the summit, said Tom Plant, who specializes in nuclear and proliferation issues at London’s Royal United Services Institute. “Kim will be on friendly territory, not hostile territory. But he wouldn’t be on home turf.”

Among the factors: it’s closer for Kim than possible Europe venues, the experience of Singapore’s security forces, and the fact that Pyongyang has had diplomatic relations with the country since 1975.

Singapore is familiar ground for the reclusive communist country, which has its embassy in Singapore’s central business district.

Single-party rule since Singapore gained independence in 1965 has ensured stability and fostered a security state that is among the world’s most efficient, although sometimes it is decried by civil libertarians as repressive. Located between two Muslim majority nations — Malaysia and Indonesia — with Islamic State group sympathizers, it has effectively checked terrorist threats.

According to the U.S. State Department’s report on human rights for 2017, Singapore’s “most significant human rights issues” included caning as punishment imposed by the courts; preventive detention under various laws without warrant, filing of charges, or normal judicial review; monitoring private electronic or telephone communications without a warrant; significant restrictions on freedoms of assembly and expression, including for the press and online; the use of defamation laws to discourage criticism; and laws and regulations significantly limiting freedom of association.

North Korea’s state companies have, in the past, conducted legal and illegal business dealings with Singapore companies. The city-state, under pressure from the U.S. and a leaked U.N. report, officially cut off trade relations with North Korea in 2017 to abide by sanctions.

Singapore also is welcome ground for the United States. It is a large trading partner, the second-largest Asian investor, and a longtime supporter of its military presence in the Asia-Pacific region. It’s also the regional headquarters of large U.S. companies including Google, Facebook and Airbnb. Diplomatic relations between the two countries were established in 1966.

“The North Korean side will likely have a very large number of logistical and protocol issues it wants addressed by the summit venue, so having a (North Korean) embassy in the country where the summit is to be held is likely a requirement,” said Malcolm Cook, a senior fellow at the ISEAS-Yusof Ishak Institute in Singapore.

Located just over 3,000 miles from North Korea, Singapore is comfortably within the flying range of its aircraft. Flying to western Europe would require a stop or two to refuel.

“Singapore is neither too far away as European nations are, allowing Kim Jong Un’s private jet to make it here without refueling, nor too close that Trump might be seen as ‘giving way’ to Kim by having to travel a longer distance than the latter,” said Nah Liang Tuang, a research fellow at the Institute of Defense and Strategic Studies.

Former U.S. Ambassador to Singapore David Adelman said Singapore was ideal because it has been “an honest broker between East and West.”

“Singapore has been a great friend to the U.S. but also Singapore has carefully worked to be a friend to all, which has earned it trust in capitals around the world,” he said.

Its free enterprise philosophy welcomes trading partners from everywhere, regardless of politics.

“We hope this meeting will advance prospects for peace in the Korean Peninsula,” Singapore’s Ministry of Foreign Affairs said in a statement.

In 2015 Singapore was the site of another unprecedented summit between two leaders burdened with a legacy of mutual distrust: Chinese President Xi Jinping and rival Taiwan’s then-President Ma Ying-jeou, the first such meeting since the founding of the People’s Republic of China in 1949.

Singapore also has hosted regional meetings, including the Association of Southeast Asian Nations summits in 2007 and 2018. Since 2002 an annual security conference has been held there, featuring defense chiefs and officials from countries including the U.S., China and South Korea.

For such gatherings, roadblocks are set up around the summit venues, where armed Nepalese Gurkhas stand guard.

Valued foreign guests won’t be troubled by protesters, either. Demonstrations in Singapore can only be held in a designated area, the 2.4-acre Hong Lim Park.

Amnesty International says amendments to the country’s Public Order Act have given authorities more power to restrict public assembly, and participants in peaceful protests have been arrested.