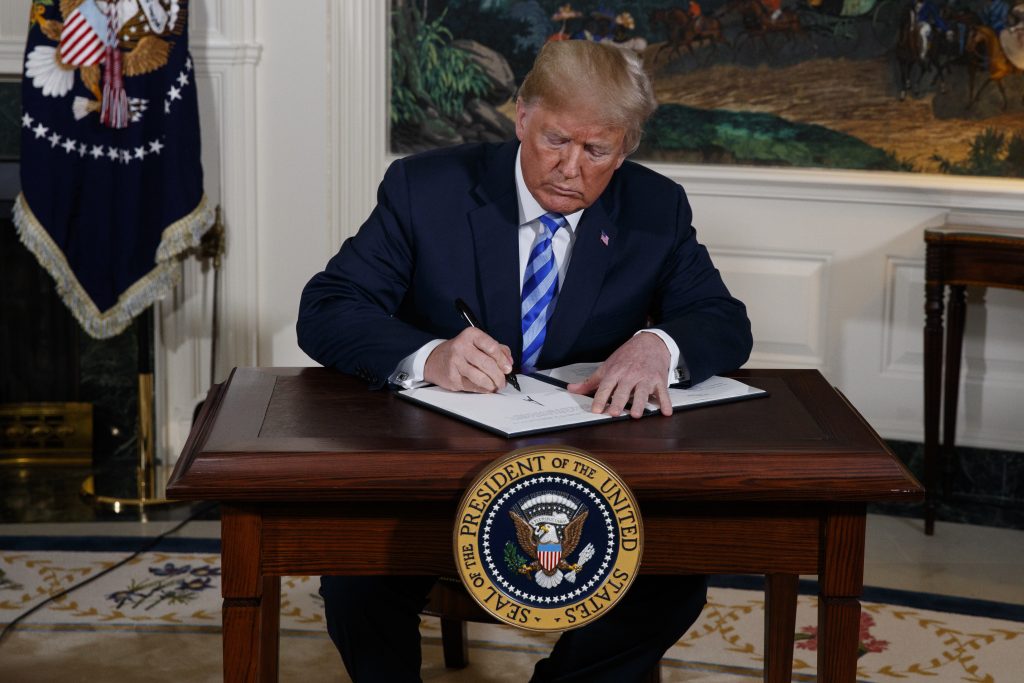 On Tuesday, President Donald Trump announced his decision to withdraw from the failed Iran nuclear deal. The president has famously referred to it as “the worst deal in history.” Its very premise has been betrayed by its own abysmal track record over the past two years.

The theory behind the Joint Comprehensive Plan of Action, or JCPOA, was that the Iranian regime would, in the interests of its own people, trade its nuclear ambitions for economic incentives. But rather than focusing on behaving responsibly, Tehran has poured billions of dollars into military adventures abroad, spreading an arc of death and destruction across the Middle East from Yemen to Syria. Meanwhile, the Iranian people have suffered at home from a tanking currency, rising inflation, stagnant wages and a spiraling environmental crisis.

President Trump acted prudently. He spent more than a year studying the deal, soliciting information and assessments from within his administration, and consulting with our allies. He decided that this deal actually undermines the security of the American people he swore to protect and, accordingly, ended U.S. participation in it. This action reversed an ill-advised and dangerous policy and set us on a new course that will address the aggressive and hostile behavior of our enemies, while enhancing our ties with partners and allies.

The president’s December recognition of Jerusalem as Israel’s capital illustrates the latter policy; it will come to fruition Monday with the U.S. Embassy’s official opening in the Holy City. While some believe that Israel is an irritant that upsets the natural balance of power in the Middle East and that Israel’s influence should be constrained, this president sees the enormous benefits the United States has reaped from our sustained relationship with Israel, as well as the opportunity to leverage this investment into greater cooperation to the benefit of both nations.

The recognition of Jerusalem and expeditious move of our embassy is a case in point – a physical demonstration of the U.S. commitment to Israel, which is in fact a commitment to our national-security interests. Israel’s recent revelation of a trove of documentation of Iran’s past nuclear-weapons program demonstrates that we share common enemies who do not differentiate between us, and we are safer together than we are individually. In addition, Israel is a dynamic economic powerhouse. While its population is only one-tenth the size of Iran’s, Israel has a gross domestic product that is roughly equal to Iran’s, and the annual flow of foreign direct investment in Israel is four times greater than in Iran. Closer economic partnership with Israel will only increase America’s prosperity, which, as President Trump has pointed out, leads to greater security.

As part of the Iran deal announcement, the president also deliberately linked his withdrawal from the JCPOA to the ongoing negotiations with North Korea, announcing that Secretary of State Mike Pompeo would soon be landing in North Korea. No one in the Trump administration has any illusions about the negotiations ahead. But President Trump also understands that North Korea has exhibited a wide range of unacceptable behavior, and its weapons-of-mass-destruction programs pose an immediate danger to America and our allies. The president much prefers to handle these issues diplomatically. Since the earliest days of his administration, he has established strong working relationships with his Japanese and South Korean counterparts to help do just that.

Moreover, President Trump has not shied away from our differences with China but has also resolved to work cooperatively with President Xi Jinping, who will also play a critical role in any resolution to the North Korean nuclear threat.

In all of these cases, President Trump has been willing to take unconventional action to turn momentum to America’s favor. The Iran deal is not an inescapable trap; it’s merely an inadequate deal that couldn’t withstand serious scrutiny. The president’s commitment to keeping his word is evident in his recognition of Jerusalem as Israel’s capital – something three previous presidents had promised but failed to deliver. And President Trump created the opportunity for direct negotiation with North Korea. While the future remains uncertain and challenging, one thing we know for sure is that the president will always put America First.